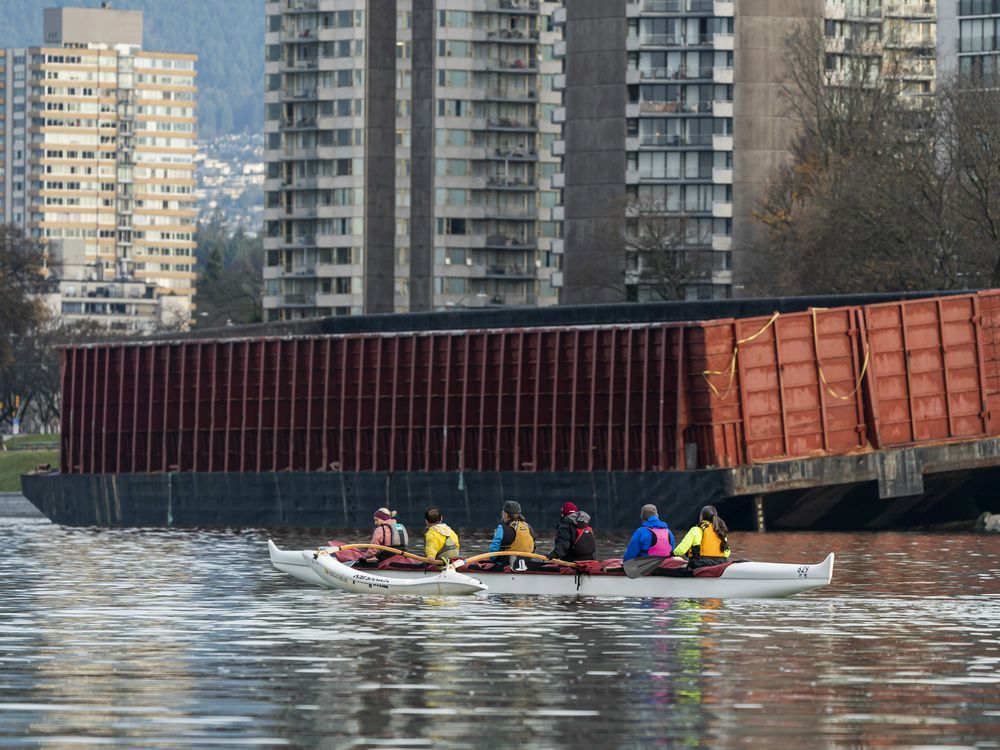 The 5,000-tonne barge that has languished on a popular downtown Vancouver beach for more than six months remains firmly in place.

On Nov. 15, 2021 the barge broke free from its mooring in English Bay during a wild storm and high tide and washed up on Sunset Beach. At one point, it was feared the barge would crash into the Burrard Bridge.

The following month, the barge’s owner — Sentry Marine Towing — got a Transport Canada permit to try to drag the barge back off the beach and into open water.

This effort, and subsequent attempts to move the barge by tug, failed.

On Feb. 9, the City of Vancouver issued a statement that Vancouver Pile Driving had been contracted by Sentry Marine Towing to cut the barge into pieces and haul those pieces away by boat. It was expected to start the following month and take four months to complete.

On April 21, Postmedia News contacted Sentry Marine Towing, the City of Vancouver, Vancouver park board and Vancouver Pile Driving to get an update on the barge.

At that time, the spokesperson for Vancouver Pile Driving stated there was no date set yet for work to start.

They said a “letter of advice” had been received from the Fisheries Department and that other permits and assessments were still in process.

On Monday, the spokesperson said there were no updates.

They referred Postmedia News to information contained in the Feb. 9 media release from the city, adding that the barge posed no safety risk to the public.

When the barge first beached, it attracted a lot of onlookers and was a novelty on social media. Parks board even posted a fun sign outside the vessel.

However, the tone on social media is changing, with some commenters questioning why the process is taking so long.

I don’t know, maybe I’m just grumpy, but I think this barge is a really good analogy for the City of Vancouver in a crisis: make half-assed attempts to solve it, which obviously fail, then never mobilize to actually solve the problem in a timely manner. 🤷🏻‍♀️ pic.twitter.com/5kr1KetmyG

One local visual effects artist Nahuel Letizia even imagined how quickly a kraken could deal with the problem.

Other media have reported that a Vancouver company, Clearwater Demolition, had been subcontracted to begin dismantling the barge.

However, neither that company or Vancouver Pile Driving were able to confirm this information on Monday.