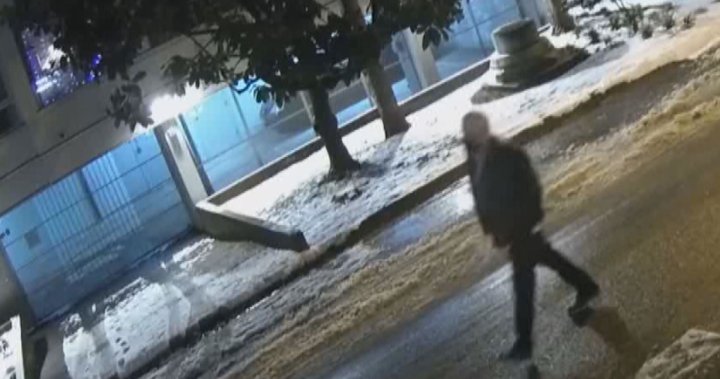 There is anger and frustration over the sentence handed to a B.C. man who unleashed an unprovoked attack on a young woman in a Vancouver alley last year.

Robert Douglas Ferrey did not receive any jail time for the Feb. 13, 2021, stranger attack and he may also end up with no criminal record.

Surveillance video captured Ferrey in Maxine Lane between Bute and Thurlow streets, where he grabbed the 24-year-old victim from behind in the dark.

Both he and the victim fell to the ground. Ferrey fled when she screamed.

Vancouver police said the woman was not physically hurt.

Ferrey, 59, pleaded guilty to assault on June 13 and was sentenced to a conditional discharge and two years probation.

If he meets all of his conditions, Ferrey will have no criminal record.

“That there is actually no criminal result if a man attacks a woman in an alley at nighttime.”

The random attack happened about three blocks from Ferrey’s home, where on Tuesday, he declined to talk to Global News about the assault conviction and conditional discharge.

Before his arrest, Ferrey was the produce manager at Save-On-Foods Capilano on Marine Drive in North Vancouver.

An employee who answered the phone at that location Tuesday said Ferrey is no longer working at the store.

Save-On-Foods did not respond by deadline to a media request from Global News regarding Ferrey’s current employment status.

Ferrey must abide by several probation conditions including no contact with the victim, not possessing any weapons, attending counselling, attending all scheduled appointments with the professionals in charge of his mental health care and taking all medications and medical treatment prescribed to him by those professionals.

“This would suggest that there are some underlying mental health issues that may have contributed to this unfortunate offence,” criminal lawyer Ravi Hira, Q.C., told Global News.

Hira, who is not connected to the case, said conditional discharges are rare but can be granted when in the best interests of the accused and not contrary to the public interest, and in cases where offenders with no criminal record plead guilty.

Vancouver police say the city is still averaging four random assaults per day and are encouraging victims to come forward and report the crimes for their safety and that of the public, and so they can receive support.

“While it’s always disheartening when somebody may not feel that justice has been served through the court system, we have to put our trust in that court system,” Sgt. Steve Addison of the VPD told Global News.

The VPD recently analyzed 44 of the most serious stranger attacks that occurred this spring, involving 40 different suspects.

Mental health, Addison said, was a contributing factor in 73 per cent of cases.

Ferrey, who has no criminal record, must also pay a $100 victim surcharge.