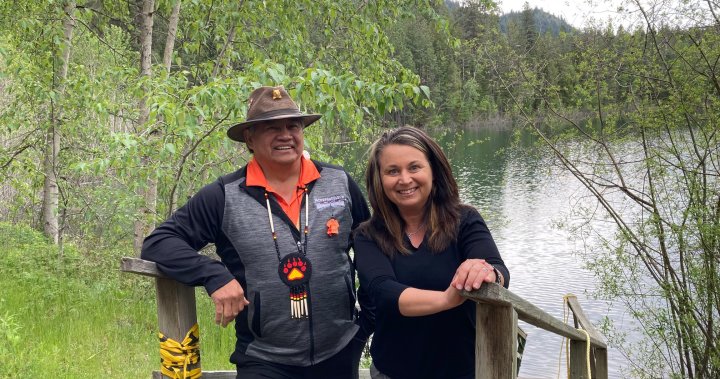 Warning: Some of the details in this story may be disturbing to some readers. Discretion is advised.

A new initiative designed to help Indigenous people who have been disconnected from their communities return home is being launched on B.C.’s Sunshine Coast.

It was co-created by Charlene SanJenko, who was adopted at an early age. Her non-Indigenous foster parents made the decision not to tell her she’s First Nations. SanJenko believes they made the best decision they knew to make at the time.

“It wasn’t until my 50’s that I started digging into my heritage,” SanJenko told Global News.

Her research began after a fundraiser in Gibsons, B.C. in 2015. At the event in the community’s public market, she was gifted a wooden paddle featuring Indigenous designs and says the moment she first held it, she had a visceral reaction that pushed her to explore the questions she carried with her, her whole life.

“I felt this amazing wave of emotion come over me. I think it was my ancestors calling out to me through that paddle. That was the night I sought out to prove what I think I intuitively knew, so I started the journey of paperwork and proving my status,” she said.

Inter-generational survivors on healing through the power of Pow Wows

A three-year process that began with her adoption certificate which she says shows her mother’s name, age at the time (16) and the word “Indian” underneath.

“I remember reading that and I actually just remember relief being the feeling that came, like, ‘I know,’” SanJenko said.

SanJenko is among more than 150 children taken from Splatsin First Nation between 1960 and 1980, during the Sixties Scoop. That was a significant portion of the population of her home nation, she says, leaving behind just 300 people in the community.

It sparked a movement called the Indian Child Caravan, led by a man also taken as a child from that same community.

“I remember running away from the foster placements and running home to my mother,” said Wenecwtsin, known by many as Wayne Christian.

“The RCMP would show up and take me back. At that point, I was 13-years-old. I honestly thought about taking my life. In that process, I just lost all hope. I turned that into anger as a teenager, I ended up in prison and jail,”

In his early 20’s, Wenecwtsin was a foster parent himself, caring for his brother. He still re-lives the unthinkable moment one cold December day when we discovered his dear brother had died by suicide, using his rifle.

“When you talk about this stuff, it’s alive in your mind. My story is like thousands of our people who were scooped up across the country,” Wenecwtsin said through tears.

A year later, his mother, who survived the former Kamloops Indian residential institution, passed away after a battle with treatable cancer.

“My mother was a child when she went into that institution.”

That’s a big part of the reason why the former seven-term Secwépemc Tribal Kúkpi7 (Chief) — who, through cultural healing practices, moved past the trauma responses of his teens — has now spent most of his adult years advocating for Indigenous children.

“The [Sixties Scoop] was a big push for us taking control of our own child welfare and enacting our own legislation. We’re the only one in Canada at this point that does what we’re doing,” he said.

“If we didn’t do what we did in 1980, our community would be like everybody else, because there’s more kids in care in the state now that when residential schools operated at their peak.”

Seeing his work, SanJenko got in touch with him last year. Now the two are working together to help others who are trying to reconnect with their communities, by hosting a healing event back at that same place in Gibsons where her journey to returning home began.

The event is called For the Children and featured a listening circle for participants, the viewing of a short film and the announcement of a feature-length film called Elders Project.

“We’re looking at how do we begin a process of opening people up to the possibilities of what they can do themselves, not only our own people, but Canadians as a whole because healing isn’t limited to us,” Wenecwtsin said.

This fall, they also plan to launch a project called Our Nation Heals, with a public call out to anyone who wants to walk the path of healing with them.

“I’m very curious to put a call out to others who might be looking to be on this journey of coming home. It might be from that community or others who just don’t know where to even start,” SanJenko said.

“Our intention is that our short film becomes like a calling card where we can walk into a community, any community and show a film, share a story and have a conversation or a dialogue.”

A full-circle moment for two survivors sent on very different paths, now coming together in order to help others come home.

“That’s how you change the world is through the children,” Wenecwtsin said.

Wenecwtsin says with classes resuming for the new school year, it’s especially important to keep in mind what we teach and how we play in a role changing the narrative towards a more truthful one.

“I was going to study history and become a history teacher but they taught nothing about our people, so it’s about us helping to rewrite that story about our history,” he said.

Anyone experiencing pain or distress as a result of their residential school experience can access this 24-hour, toll-free and confidential National Indian Residential School Crisis Line at 1-866-925-4419