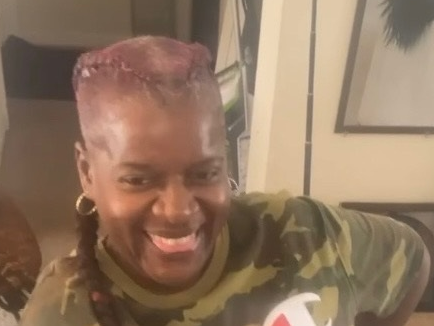 A North Carolina dogsitter was mauled to death by two pit bulls she was watching in her own home.

The deadly attack on Trena Peed, 46, of Greensboro, happened two days after her mother warned her to stop sitting for the dogs.

Peed let the canines out into her backyard early Thursday morning when neighbours heard her crying loudly for help, WGHP reported.

Neighbors’ shock and horror at the attack can be heard in 911 calls.

“It’s dark,” one neighbour said in a 911 call. “All I hear is her yelling and her dogs over there attacking her.”

When officers and animal control arrived, they determined the only way to stop the attack was to shoot one of the dogs.

“Shots fired,” could be heard on traffic radio, according to the outlet. “I got one dog down, it’s another one out here.”

Peed’s son was reportedly asleep inside the house and woke to find out his mother was dead.

“It’s a terrible way to go,” said one of her neighbours and longtime friends. “She was doing something good and died behind it and died a tragic death.”

The surviving dog is in quarantine. There’s no word on any possible charges, however Peed’s mother, Helen Harris, believes someone needs to pay for her daughter’s death.

“Whoever the owner is, they need to come forward because they say they love my daughter. This is not showing love for her right now,” Harris told WFMY.

“I understand it was not intentional, but I just talked to my daughter on Tuesday, and I told her you need to get (those) dogs out of your house.”

A GoFundMe campaign was launched for Peed, who had previously “endured and overcame so much,” including the recent deaths of her two sons, who each died in “tragic” car accidents.

“By her faith, she always had a smile on her face that could light up any room, loved to laugh, cook, enjoy life & had a heart of gold,” read the fundraising page.

“My mom has always been a true example of strength, love, and determination. My siblings, grandmother, family, and I are heartbroken at her sudden passing.”