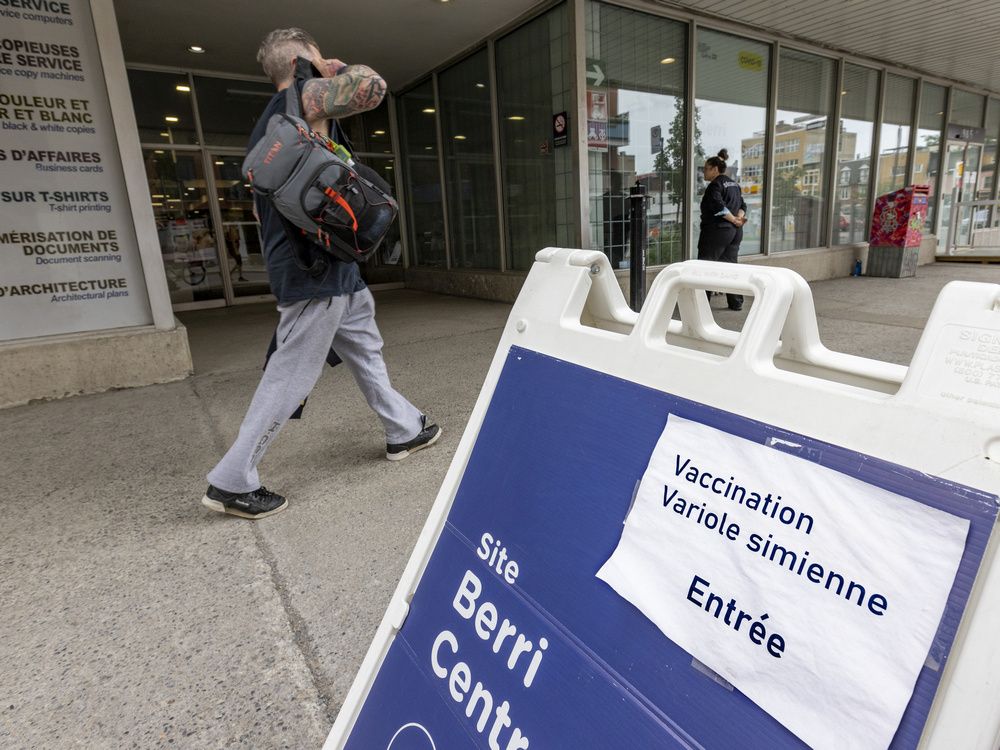 The agency says nearly 10,000 people have been inoculated against the infectious disease, but the rate of vaccination has slowed. There is enough of the smallpox vaccine available in the city to expand the campaign to tourists, which will help lower the risk for the Montreal population, said Dr. Geneviève Bergeron, the medical officer for health emergencies and infectious diseases at the city’s public health department.

The change comes as Montreal is seeing a slight increase in monkeypox cases, following what Bergeron said was beginning to look like a plateau. The trend is consistent with data in other provinces, including Ontario and British Columbia, as well as around the world.

“In the past week there’s been an upsurge — not a big increase, but still a trend that seemed to be increasing slightly that caught our attention,” Bergeron said. “So we’re following it closely. … There’s a long incubation period, so there could be variations in that sense.”

As of Tuesday, a total of 184 monkeypox cases had been confirmed in Montreal, with another 75 probable cases and eight more suspected. Quebec’s latest update, also from Tuesday, stated that 284 cases have been declared in the province since the start of the outbreak on May 27.

With vaccine eligibility already “very wide” among the group in which nearly all cases have been identified — men who have sex with men — Montreal public health’s focus amid the increase is to promote the shot, Bergeron said.

“At the beginning, there were a lot of people who wanted to get vaccinated and it’s still progressing, but there’s a slowing down in the rhythm,” she said. “So we want to promote it where people are, and to communicate well.”

A total of 9,781 doses of vaccine had been administered in Montreal as of Tuesday, out of 10,832 across the province.

The campaign initially focused on people who had been exposed to infections or attended events where cases surfaced. It was then expanded in June to include at-risk people who hadn’t been exposed, to protect them preventively.

“We’re really following the epidemiological data to guide us on that,” Bergeron said. “People who are in Montreal, planning to have sexual relations in Montreal — even if they’re not currently in Montreal — already have access to the vaccine.”

Partner organizations are on the ground to help spread the word within the community, in what Bergeron described as “really admirable mobilization.”

Another way to target tourists during the summer will be through pop-up notifications for users of dating apps who identify with the community.

Dr. Réjean Thomas is the founder and director of L’Actuel clinic downtown, which specializes in treating sexually transmitted diseases, and is where some of the city’s first suspected cases of monkeypox were identified. He said he thinks this weekend is the time to vaccinate as many people as possible.

Montreal Pride and the 24th International AIDS Conference at the Palais des congrès are just weeks away, Thomas said, and it takes about a week for the vaccine to take effect.

He said he has been surprised by the number of high-risk patients at his clinic who haven’t been vaccinated.

“There was a craze for vaccination at the beginning, but now people tell us, ‘Well, no one’s talking about it anymore,’ ” he said. “Those who aren’t vaccinated, I tell them what I see — and what I see isn’t very pretty. People are suffering. … It’s very painful.”

Thomas wants to remind people the vaccine is how to slow the spread, and that while monkeypox might not be deadly, it’s extremely unpleasant and can lead to complications.

“Some people had (ulcers) in their mouths,” he said. “We had a patient who was hospitalized because he couldn’t eat. They’re really painful ulcers, and people will be isolated for two to four weeks in the middle of the summer. … People will lose money if they can’t go to work.”

On Wednesday, Montreal public health said it’s aware of four monkeypox-related hospitalizations so far, including two for risks of airway obstruction, one for an issue with a person’s eye and another for myocarditis.

Dr. Michael Libman, professor of medicine at McGill University and specialist in infectious disease and tropical medicine, pointed out that while there have been few hospitalizations so far and that they were mainly related to sores, “the cases have been heavily concentrated in people who are relatively young and relatively healthy.”

“But there’s this fear, of course, that it will spread beyond … to people who are immunosuppressed,” he said. “That it will spread to older people … out of this community where we don’t expect them to get terribly sick because they’re relatively young and healthy — and that’s always been the fear.”

Libman added some of the severe cases of monkeypox in Africa occurred among children.

“We really, really lucked out that somehow children didn’t have severe disease (with COVID),” he said. “That’s not the way it goes even for most infectious diseases. … Almost any kind of infection, children actually do worse … and for monkeypox, I wouldn’t count on children being OK. And I honestly would rather not find out.”

Bergeron said monkeypox making its way into other populations has been a concern since the beginning of the outbreak.

“What we’re seeing, with the phenomenon of the emergence of this disease that was endemic to some African countries and is emerging simultaneously in different countries — it’s worrisome to see the situations,” she said. “We’re still pretty early in the evolution of this new phenomenon, but it’s definitely worrisome to see.”

Thomas, for his part, remains worried for the LGBTQ2+ community. In a given day at his clinic, he receives three to five walk-in patients and another two to three referred by health authorities. About two to three per day end up testing positive for monkeypox. The average age among them is 39.

“My message is to vaccinate, vaccinate, vaccinate as much as possible,” he said. “Secondly, if you have doubtful lesions on genital organs or elsewhere, get tested. Continue with prevention and prudence if you’re sexually active. Be careful.”