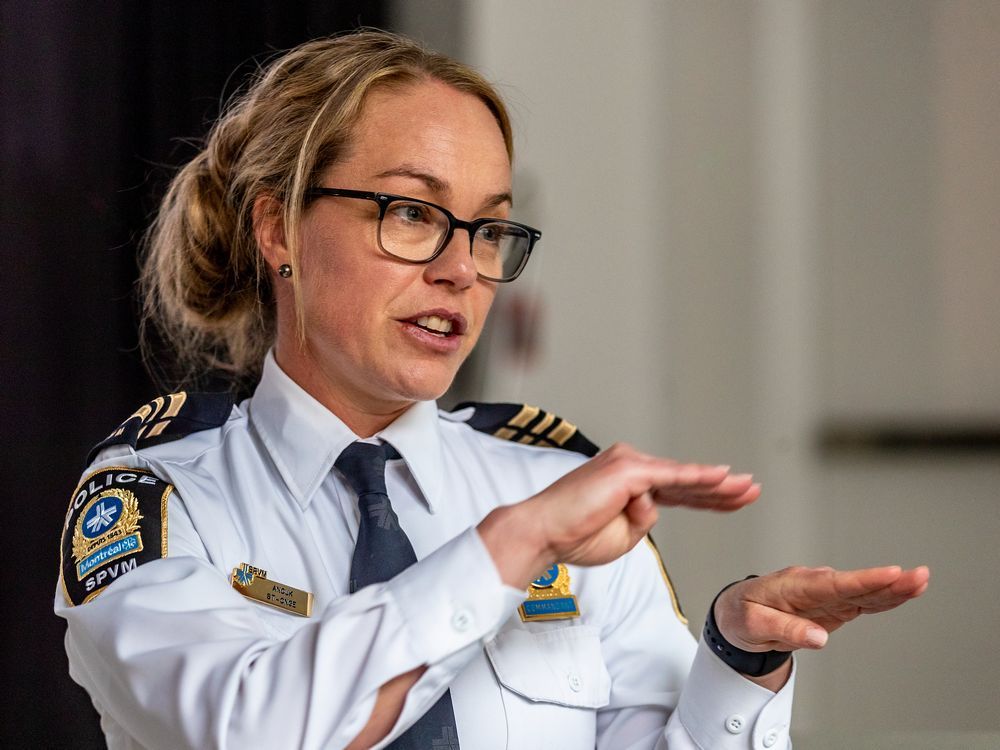 Intimate-partner violence is widespread and yet not reported or spoken of nearly as often as it happens, says Anouk St-Onge, commander of a recently established Montreal police department section specializing in this form of violence.

The goal of the service is to accompany the person who has been subjected to intimate-partner violence — and, far more often than not, that is a woman.

Although statistics do not necessarily reflect an increase in intimate-partner violence during the COVID-19 pandemic, community partners say they have noted an increase.

“We know, worldwide, that the pandemic had an effect on families — but it has not been reflected in terms of what was reported to police,” Monica Dunn, co-ordinator of the Table de concertation en violence conjugale de Montréal, said at Wednesday’s press briefing. She has heard from shelters for women and children that the level of intensity of domestic violence increased during the pandemic, she said.

Not all victims of intimate-partner violence are ready to call police or file charges, she said. With centres in each of Quebec’s 17 administrative regions, CAVAC helps everyone, free of charge, whether an incident has been reported to police or not. “We saw an increase in distress,” Charest said. “People were constrained and could not go out during the pandemic and so coercive control was exacerbated.”

Coercive control is a form of intimate-partner violence that includes psychological and emotional abuse that can include isolation, humiliation and monitoring financial control. It can be just as damaging as physical abuse.

An increase of 25 to 30 per cent in calls related to intimate-partner violence was recorded by domestic-violence shelters, Charest said, adding that they were at capacity and an increase was observed in femicides. Most femicides are committed by an intimate partner or an ex-partner. On the up side, more talk in the media about intimate-partner violence has meant more people looking for help, she said, and that is a good thing.

The new service aims to create better links between police and community partners, St-Onge said. Ending intimate-partner violence “is the work of a team,” she said.

Intimate-partner violence is different from other criminal actions, she said, and one advantage of members of the service working exclusively with these cases is that they develop experience and understanding.

With only four investigators and more than 5,000 cases last year, the SSVC cannot address every case, St-Onge said, and it is important that organizations like CAVAC and the Table de concertation en violence conjugale be involved. “Together, we form a safety net around the person.”

Her service takes on “the more sensitive cases,” she said — those involving cases like those of women who have been victimized for years by partners through coercive control or those who are young and vulnerable. It looks for specific elements, she said, such as whether there is a risk of homicide or a spouse is refusing to accept a separation.

One aspect of the new service is it permits investigators to have closer follow-up on victims to see how they are doing, to ensure that offenders are respecting their bail conditions and terms of release and to intervene if they are not, St-Onge said.

“The relationship of my team with the victim is important,” she said. “If she has confidence in the police, that mans that, if something happens, she will call us.

And because victims of intimate-partner violence often return to their abusive partners, it’s important to work with those partners to prevent recidivism, she said. A pilot project launched by the SSVC in November involving local community health authorities and local police stations is intended to refer those charged with intimate-partner violence to resources that can help them.