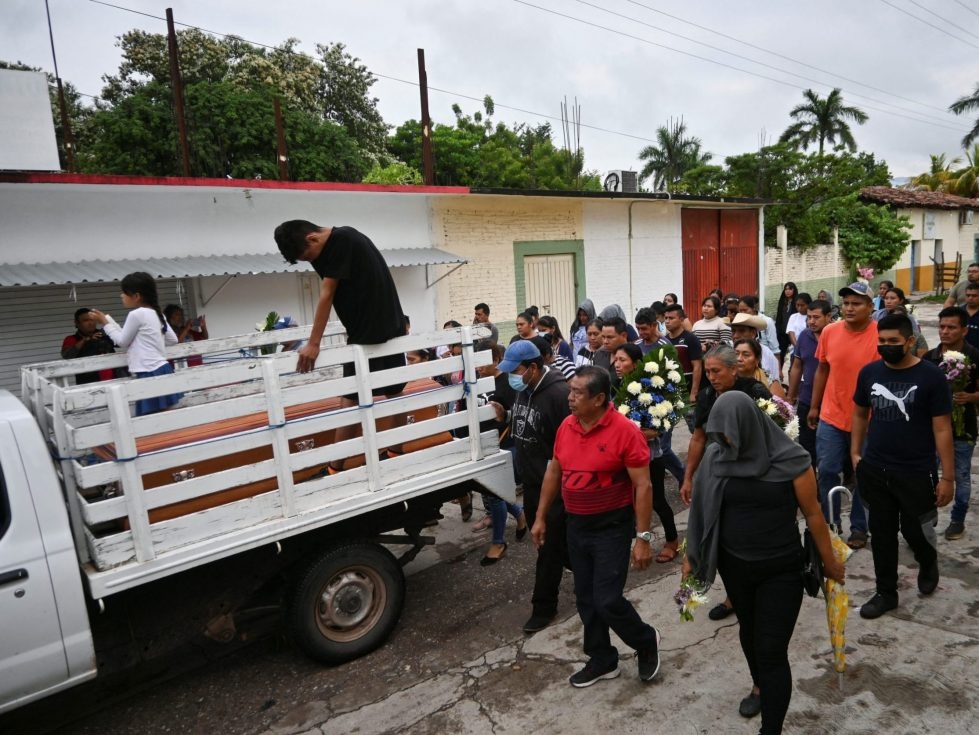 MEXICO CITY — Authorities said Thursday the massacre of 20 townspeople in southern Mexico appears to have been the work of a drug lord who used social media to try to blame a rival gang.

The new revelations illustrate how Mexican drug cartels are increasingly using social media to apportion blame for attacks and mislead authorities and the public.

Ricardo Mejia, Mexico’s assistant secretary of public safety, said Thursday that authorities had raided five properties belonging to the Hurtado brothers, who operate under the name Familia Michoacana cartel. Those raids found ranches, luxury homes and a menagerie including a tiger, a zebra, antelopes and stuffed wild animals.

The Oct. 5 attack in the town of Totolapan killed the town’s mayor, his father and 18 other men. Responsibility for the attack was originally claimed in a video attributed to a near-extinct gang known as the Tequileros. Men in the dark, shadowy video said they carried out the attack and were retaking Totolapan.

The Tequileros had long terrorized the town, but had been chased out years ago by a vigilante group believed to have been backed by the Familia Michoacana, which dominates the area.

Jose Alfredo Hurtado, who leads the Familia Michoacana along with his brother Johnny, posted a video several days later saying he was the intended target of the shooting and had narrowly escaped.

“The attack was aimed at me,” Hurtado said describing the events in which gunmen entered the town and opened fire on a meeting the mayor was holding with other officials — apparently members of a vigilante group.

But Mejia said Thursday that the capo’s own group probably killed them.

“According to a serious line of investigation, it was they who carried out the mass execution and tried to make it appear as if another group,” Mejia said.

Local media had reported that the Hurtado brothers may have been upset because the Totolapan mayor and the group of vigilantes he apparently headed had rejected the capos’ choice of another man to lead the town.

Hours after the Oct. 5 shootings, a group of armed men appeared in a video filmed around dusk, claiming to be the Tequileros and saying they were retaking control of Totolapan, which is near the mountains where much of Mexico’s opium poppy crop is grown.

With poor lighting and sound, the Tequileros video was unlike the more slickly produced cartel videos that have become the norm, in which well-armed groups of masked cartel gunmen regularly threaten rivals and authorities, and claim or reject credit for killings. The Tequileros video now appears to have been a fake.

Jose Alfredo Hurtado, whose nickname “The Strawberry” is a slang term in Mexico for someone with high-end tastes, appeared in his own video a few days later wearing a Gucci T-shirt and an expensive-looking wristwatch.

Hurtado said he had planned to attend the meeting at which Mayor Conrado Mendoza and his father, a former mayor, were killed, but that the gunmen opened fire before he had descended from his bulletproof vehicle, allowing him to narrowly escape.

Hurtado mentioned that he had cooperated in the past with the deceased mayor in fighting the Tequileros gang, saying, “We started this struggle together, the mayor and us.”

“We had set up this meeting with the mayor and his father, and the peace group they have,” he said, referring to a vigilante group that had been active in Totolapan.

In Mexico, residents of towns under pressure from from one cartel often set up vigilante groups and turn to rival cartels for help in fighting off the oppressors. Cartels make much of their money in Mexico from extorting protection payments from local farmers and businessmen.