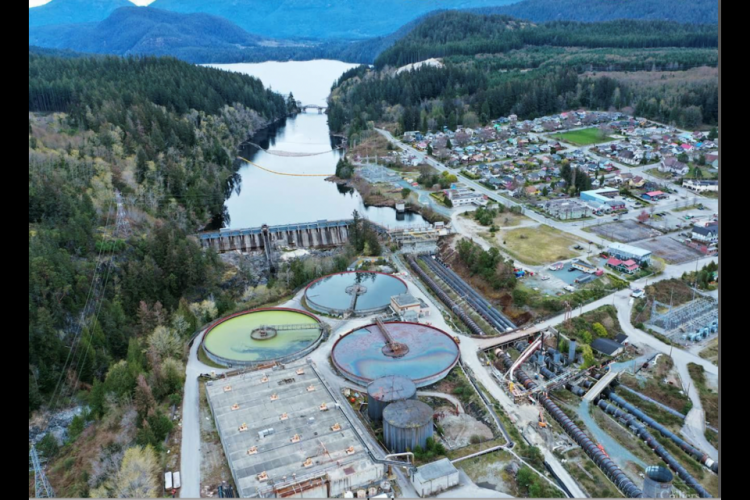 Powell River pulp mill shut down in December 2021.The land is now listed for sale as the largest industrial site on the B.C. coast | Photo: Colliers

The attempted sale of the shuttered, 100-year-old Powell River pulp mill is proving contentious as the town’s mayor has expressed “shock” at the sales listing and the local Tla’amin First Nation has laid claim to the entire 300-acre waterfront site.

Catalyst Paper, part of Paper Excellence of Richmond, B.C. closed the mill permanently last December and, according to Mayor Dave Formosa, subsequently put it on the global real estate market without consulting the city.

In February 2022, Catalyst contracted Colliers, Vancouver, to market the site.

According to Formosa, several interested parties had earlier expressed interest in keeping the city’s major tax provider a going concern.

“Paper Excellence, the B.C. Government, and Renewable Hydrogen Canada have been in extensive discussions to transition the mill into a significant hydrogen and clean fuel production facility,” said Formosa in the January 2022 release. “As I’ve said for many years, the site has excellent infrastructure to support new industry.”

“The commerce we would like to see is one that does not cause pollution but continues to be a major provider of tax base for keeping the city infrastructure happening,” Formasa told the Powell River Peak. “The Renewable Hydrogen Canada group seems to be serious, but now, the mill has pulled a dirty on us, contrary to what they told me on a number of occasions. They have listed the property, which was a big shock, which upset me and my team working with green hydrogen.

“I know there are serious people that want to buy the site.”

Formosa said that when the company lists with a large realtor, they go worldwide.

“So, I’ve lost my respect for them [Catalyst]. This city has given this particular group millions of dollars in tax credits, and to be treated like this, I’m very upset.”

Graham Kissack, vice president, environment, health and safety and corporate communications for Paper Excellence made the following statement: “We have engaged Colliers to help us manage inquiries around purchasing the Catalyst Paper tis’kwat mill. There are multiple qualified buyers interested in the site and we want to handle inquiries in a professional manner through a real estate company. No final decision has been made about the future of the mill site at this point.”

But a First Nation has definite ideas about the past and future of the site, which Catalyst has renamed Tis’kwat in recognition of the Tla’amin First Nation’s historical site use as a village.

In May, Tla’amin Nation wrote to Paper Excellence laying claim to the Catalyst Paper mill lands, including an adjacent hydro dam on Powell River.

Correspondence from Tla’amin Chief John Hackett to Paper Excellence stated that, with the closure and planned sale of the mill site, the nation was writing to reaffirm its collective title to Lot 450, including the mill lands.

“Tla’amin people were forcibly removed from this site during colonization in the 1800s and the land known as Lot 450 was set aside for the purposes of resource extraction and economic development by settlers,” Hackett stated.

He claims the 1874 sale of the land was done without Tla’amin Nation’s knowledge or consent.

“Tla’amin Nation has always protested the theft of this land and will continue to press for appropriate restoration of these lands and waters,” Hackett added.

Catalyst replied with a nuanced statement.

“While some of the Tla’amin’s concerns outlined in their letter sent on May 12 are outside Paper Excellence Canada’s jurisdiction, we remain committed to transparent communication with the Tla’amin on the company’s next steps regarding Catalyst Paper Tis’kwat,” stated Kissack. “As always, we appreciate the Tla’amin’s patience as we work through this process.”

According to Collier’s marketing material, the waterfront mill site “represents an excellent opportunity for a large-scale industrial user to acquire a highly developable site with direct access to significant electricity and natural gas services, deep water access, and close proximity to major markets and employment.”

– With files from Powell River Peak