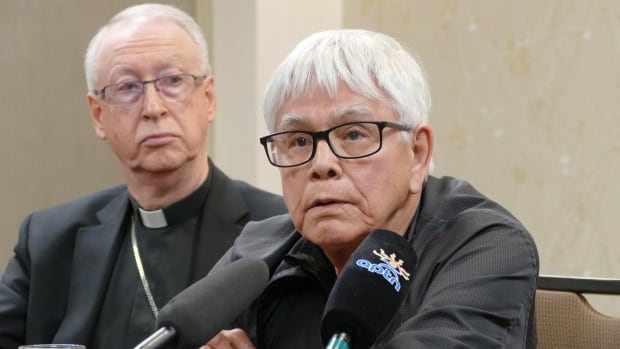 Residential school survivors met with Catholic bishops in Winnipeg Wednesday to discuss what they’d like to hear from Pope Francis when he visits Canada this summer.

The Pope is expected to apologize for the Roman Catholic Church’s role in abuses suffered at the schools, but it’s the wording of that apology that was the focus of discussions Wednesday morning.

After meeting over the last few days to discuss a draft of the apology, the National Indian Residential School Circle of Survivors met with three Catholic bishops in hopes they will take the feedback to the Pope himself.

“He’s coming to our homeland, he’s coming to Canada, he’s coming to treaty land and he has to say ‘I am sorry for what happened to your people and your children, on behalf of the Catholic Church,'” said survivor and former Assembly of First Nations Regional Chief Ken Young.

First Nations, Métis and Inuit delegates met with Pope Francis in Vatican City in March, where he apologized for the conduct of some members of the Roman Catholic Church involved in Canada’s residential school system.

Young says the coming apology must go further. He took issue with the wording that limited the apology to the actions of some members of the Catholic Church and not the role the church itself played.

“The Catholic Church has to accept ownership and responsibility for what happened to First Nations people and their families, the negative experiences that we all had,” said Young.

“We’re not happy that we weren’t consulted with respect to the visit locations,” said Young.

“We’re not happy that the apology … may well be one that we were not involved in preparing.”

Edmonton’s Archbishop Richard Smith said while the bishops are not papal advisors, they heard the survivors’ concerns at Wednesday’s meeting.

“We’ll take that to heart” and “try to find the wording that will land well … for everybody,” Smith said.

He said he has the sense the Pope will “do the right thing, he’ll say the right thing, whatever that ends up being, because he really wants this to be a step forward, a step in the whole healing process.”

“How he says it is the prevailing outstanding issue, and it will require discussion.”

Calls for a papal apology gained momentum last year after ground-penetrating radar revealed what are believed to be 215 unmarked graves near a former residential school site in Kamloops, B.C.

Since then hundreds more potential grave sites have been identified across the country, including many of the residential school sites in Manitoba.

Young said the papal apology in July will be the third one made to First Nations people on behalf of the Catholic Church.

He said he wasn’t happy with the apology in 2009, made by Pope Benedict XVI, and thought the one made to delegates who travelled to the Vatican this spring was better, but can go further.

“This is the third strike coming,” said Young, who went to two residential schools operated by the Anglican Church.

In April, the spiritual leader of the Anglican Church travelled to Saskatchewan to apologize for its role in allowing abuses to take place at residential schools.

The group that met with bishops in Winnipeg on Wednesday also conveyed their disappointment that Manitoba isn’t included in the Pope’s coming visit.

The Vatican says the trip is limited to just a few stops due to the Pope’s mobility issues.

While the survivors asked the bishops to convey a desire for more stops to the Vatican, both parties acknowledge the answer would likely be “no.”

Smith said given the Pope’s health, he was shocked he coming at all.

“The clearest indication of his desire to make this work is the fact that he’s coming at all,” Smith said.

Discussions around how to get some of the survivors from Manitoba to the stop in Edmonton are underway, the survivors circle said.

There are 139 sites of former residential schools across Canada, most of which were run by the Catholic Church.