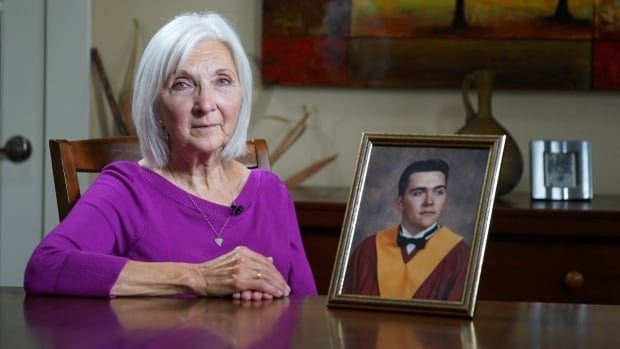 A man who went to a southwestern Manitoba hospital seeking treatment for alcohol addiction died the next day, without being assessed by a doctor — a case his mother says raises questions about how patients with addictions are treated.

At the time, the ER waiting room was nearly empty, says his mother. Brenda says initially the nurse told them Ryan was too intoxicated to be admitted to a detox bed. They were told to go home and for Ryan to return within 24-48 hours when he was sober.

She insisted her son should be seen by a doctor that day, because she knew he suffered from alcohol withdrawal seizures.

She left the hospital after checking him in. At some point after that, he fell while waiting to see a doctor, a later review into his death found.

Despite internal records that show he was not a threat to others, a decision was made to call police and have him placed in a jail cell to sober up under Manitoba’s Intoxicated Persons Detention Act, which gives police the authority to detain a person who is intoxicated if they are deemed a danger.

His mother was never informed her son was being detained by police. She only found out when the police phoned her to tell her she where she could pick him up.

“He was desperate for help,” she said.

“If they didn’t want to be bothered with him, just phone me and say, ‘Come and pick him up.…’ Why would they put him through all of that?”

After four hours in police custody, Ryan asked to go back to the hospital.

Although he had a visible mark on his head when he arrived, he was not triaged or assessed by a doctor, according to a review of his death by Prairie Mountain Health, the regional health authority for southwestern Manitoba.

After his earlier experience, he felt humiliated and told his mother he just wanted to go home and sleep.

His mother took him back to his apartment. She promised to return in the morning so they could go back to the hospital and try again to access detox services.

‘We never even got to say goodbye’

It wasn’t unusual for her to go to her son’s apartment two or three times before he would open the door. But on the third try she looked in the window and noticed furniture was overturned.

Becoming concerned, she crawled through the window.

She found Ryan unresponsive on the floor and called 911.

“All I wanted to do was just hold his hand and … let him know that I was there, and just to hang on that help was coming. But he didn’t make it,” she said.

His mother wanted to ride in the ambulance with her son, but was told she couldn’t because of COVID restrictions.

He was pronounced dead at the hospital where he had waited for care over 24 hours earlier.

“I can’t put in words, as a mother, losing a child, no matter at what age.… You can’t put into words how devastating that is,” Brenda Eamer said.

“We never even got to say goodbye.”

WATCH | Brenda Eamer’s son Ryan died a day after being turned away from Brandon Hospital:

Brenda Eamer believes if doctors would have examined her son he might still be here today. Ryan Eamer struggled with alcohol addiction when he went to the Brandon hospital emergency department last February. He died the next day.

An autopsy report gave his cause of death as blunt head trauma, caused by a fall. It says he reportedly fell at the emergency room and “may have hit his head,” but does not conclusively say when the fall happened.

In a letter sent to Brenda Eamer, Prairie Mountain Health said a review of video showing Ryan’s fall in the emergency room determined it was a “guided fall” and was “unlikely” to have caused the head injury that killed him.

Brenda has tried to get a copy of the video from the emergency room, but she has been refused access.

What happened between Ryan’s visit to the ER and his death has been the subject of investigations by both Prairie Mountain Health and the College of Registered Nurses of Manitoba, with whom his mother lodged a complaint about the conduct of the two nurses who triaged Ryan.

The internal documents from the separate investigations into his death revealed:

Brenda Eamer told CBC News she and Ryan went to the hospital in February 2021 because he knew he needed help.

He struggled with an alcohol addiction for over a decade. He got sober in 2017, but when the COVID-19 pandemic hit, addiction took hold of him again.

“He couldn’t break free of it,” his mother said. “He was struggling in the days before he went to the emergency room.”

Her son loved meeting people, Brenda said, and got a degree in psychology so he could dedicate his life to helping people.

He got a job at a personal care home, where the seniors loved him and called him “Vic” — his middle name — because to them, he was a friend, Brenda said.

His last few years were spent as a child support worker, helping troubled kids cope with their past.

But when he was 24, he lost a very good friend, and “he never got over that,” his mother said. Addiction eventually took hold.

He was the older of her two children. Now Brenda and her daughter, Melanie, are left to figure out life without him.

“It’s always been the three of us,” said Brenda.

In April 2021, Brenda filed a complaint with the College of Registered Nurses against the two nurses who played a role in Ryan’s care and in the decision to call the police.

The college did not discipline them, according to a decision sent to Brenda on Jan. 12 of this year. Instead, a letter of guidance was added to both their files “to address the insufficient client-centered care and the related professional responsibilities and obligations.”

Prairie Mountain Health’s review found questions remained about what assessments were done to rule out head injury as the cause of death. But the college’s investigation found the required triage assessments were completed and a comprehensive post-fall assessment was done by the nurses.

A nursing expert hired by the college’s complaints investigation committee to give an independent opinion on the removal of an intoxicated patient from an emergency room said a physician should medically clear a patient before police are called.

An assessment should have been done to ensure the patient did not have any immediate health care needs other than intoxication, the expert told the committee.

She said Brenda should have been called before police, and that using the Intoxicated Persons Detention Act should be “a last resort option, after all other options to manage the patient were considered,” according to the committee’s final report.

A spokesperson for the college said it cannot comment on specific cases, but that letters of guidance can be used “to address potentially undesirable conduct” identified in an investigation.

One of the nurses, in their response letter, wrote they deeply regret not having called Brenda before calling police.

Prairie Mountain Health launched its own review into Ryan’s case.

The review found that nurses improperly used a form to medically assess Ryan’s fitness for police detention. It was never intended to assess someone coming to the hospital for care, the health authority said.

Instead, it was intended to assess people brought by police to the hospital to be medically cleared before being taken to a cell to sober up.

The health region committed to taking action on several things to prevent a death like Ryan’s from happening again, including:

In a statement to CBC News, Prairie Mountain Health CEO Brian Schoonbaert said he could not comment on the specifics of the case, but said the health authority is “very aware of this matter and continues its thorough review of it.”

A government press secretary said Manitoba Health Minister Audrey Gordon was not available for an interview and noted it would be inappropriate to comment on a specific case, but provided a written statement expressing condolences to Ryan Eamer’s family.

But Brenda Eamer feels that no one has truly been held accountable for her son’s death.

The decision to not discipline the nurses “was a kick in the gut,” she said.

“I thought surely somebody there on that panel is going to agree that this was not proper procedure.”

Getting the results of Prairie Mountain Health’s initial review “didn’t sting as badly,” she said, because she prepared herself for the worst.

But she says she was disappointed the letter didn’t include some things the health authority told her in person.

“We had … a disclosure meeting, and they would say they admit that things would have gone differently for Ryan had he been seen by a physician,” she said. “They wouldn’t say any of that in the letter.”

Her aim in speaking out about Ryan’s death is to convince government officials to focus on harm reduction policies, such as sobering centres and opening more detox beds.

She hopes to “sort of serve as that stepping stone for someone else to come forward and say, ‘We need this,'” she said.

“If there’s anybody who has been hesitant or reluctant … speak out and demand from your city that we need a sobering centre.”

On Monday, CBC News will look at the plans for a sobering centre in Brandon and why it’s still years away from becoming a reality.