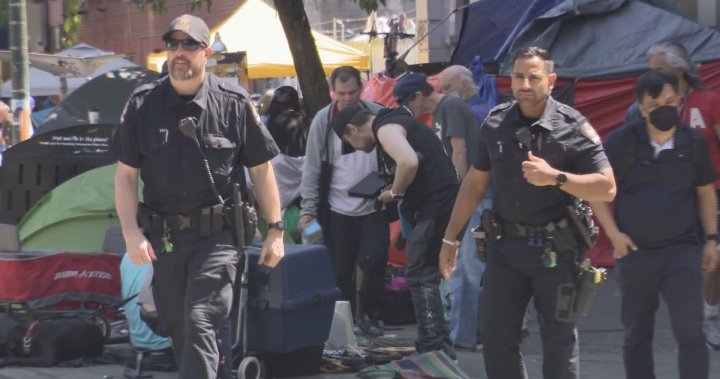 A 62-year-old man in a wheelchair is recovering from stab wounds after a random assault on the Downtown Eastside Tuesday afternoon.

Wayne, who does not want to disclose his last name due to safety concerns, told Global News he was attacked after getting into an argument with someone occupying the sidewalk in front of his apartment building.

“They are selling stuff on the sidewalk and there is no way for a person in the wheelchair to get through,” he said.

“It should not be dangerous to go to the grocery store. We are taking our lives in our hands every day to go out that door.”

Sgt. Steve Addison with the Vancouver Police Department said the investigation is still in the early stages but it appears the victim may have bumped someone and that led to the altercation.

“We do believe he’ll recover, we don’t believe his injuries are life-threatening, but obviously that kind of violence is concerning in any neighbourhood, but in a neighbourhood where we’ve got a victim who is wheelchair-bound, vulnerable, 62 years old, it’s increasingly concerning,” he said.

Addison said it’s too early to say whether this incident is directly related to the increase in tents and structures along that stretch of East Hastings Street but police have seen an increase in the amount of debris and street disorder.

“It’s really too early to say whether that’s led to a spike in increased calls for service,” he added.

Victor Dickinson is also in a wheelchair and lives in an SRO nearby.

He says it’s very difficult living in the building as the elevator is often broken and he cannot get back up to his home for a whole day.

“The street sweep is not working properly,” he told Global News.

“The city police take people’s belongings and throw them in the bin. And they’re screaming and I hear them outside my window all night long, getting their stuff taken away. And it’s the only things they own. It’s terrible.”

Dickinson said it now takes him a while to go one block due to the tents pitched on the sidewalk. He said he has fallen off the sidewalk before because there’s not enough room.

“I’ve been pushed straight over, onto the road, kicked, punched,” he said.

Vancouver has a new tent city. This time it’s in the street, not a park

The latest incident comes at a time during which the number of temporary street homes in the form of tents and canopies has grown along East Hastings Street.

Eli Oda Sheiner with the Coalition of Peers Dismantling the Drug War and the Vancouver Area Network of Drug Users told Global News the street sweeps that were taking place are not part of cleaning up or sanitation services by the City of Vancouver.

“When we say street sweeps, what we mean is a contingent of city engineering workers and Vancouver Police Department workers who were enforcing a bylaw every day, usually in the morning and then later in the day in the Downtown Eastside that prohibited people from erecting shelters and residing in them permanently.”

Vancouver removed the enforcement of this bylaw on July 1, which has resulted in more tents and structures, Oda Sheiner explained.

He said in addition, many SROs are not properly ventilated and become very hot in the summer months, forcing people outside so they are more comfortable.

The groups held an event Wednesday to bring awareness to the issue and appoint community stewards to help keep the streets free of garbage and clutter.

“We’re trying to bring a bit of autonomy back to the neighbourhood,” he explained.

The groups put down an accessibility lane on Hastings Street, which will indicate to people where they can put up tents or structures and will allow a corridor for people to walk and in wheelchairs to pass safely.

In a statement, Taryn Scollard, deputy general manager of engineering with the City of Vancouver, told Global News city crews remove garbage and structures on East Hastings Street in an effort to minimize obstructions and to keep sidewalks passable, clean and safe.

“Our frontline street crews are trained to remove material that has been abandoned – not to remove items that are clearly personal belongings. We sincerely regret and apologize for any harm and trauma that has been created as a result of this work and recognize important items have been discarded,” she said.

In addition, more waste bins have been set up along this stretch and the city will provide garbage bags, gloves and other cleanup tools to the community stewards and organizations to help keep the sidewalks clean, Scollard added.

“The City’s Engineering Services staff will also be conducting sidewalk cleaning and will work with community groups and those experiencing homelessness to enable this work. This work will begin soon, noting that we need to provide time to community groups to organize a block stewardship program to assist with this work, and to provide them with tools that they need to be successful.”

Some residents say they continue to feel unsafe in the area.

“There has been a death threat…I have run into confrontations…arguments…things thrown at me, swearing, even if you ask politely we need to get through,” resident Wendy Stewart told Global News.

I live at 40 East Hastings. Today’s photo of the garbage everyone in our building has to walk past. #hastings #tentcity #vancouverhastingstentcity pic.twitter.com/6SgJ6RYiER

“People who have lived here, 16, 20 years have never seen it like this,” Stewart added. “It’s just not safe for people. I know someone who lives on the upper floors and she can’t have her windows open due to insects, fleas and other issues with this not being cleaned up.

“You’re wondering if you’re going to get attacked every time you go outside.”