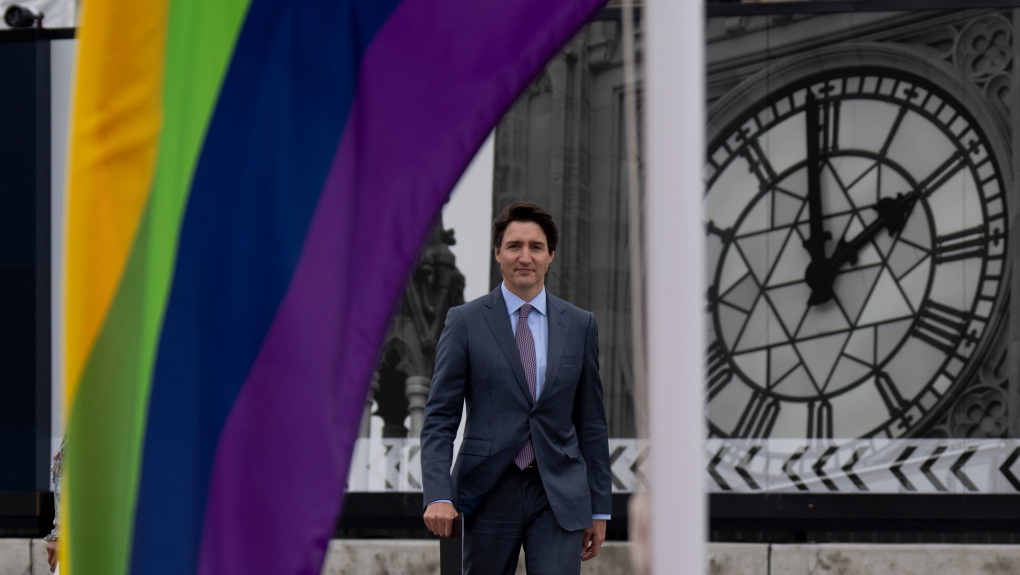 Survivors of the so-called LGBTQ2S+ purge were on Parliament Hill on Thursday calling for the federal government to make progress on recommendations they’ve made for improving inclusivity within federal workplaces, including the RCMP and Canadian military.


“Talk is cheap,” said Douglas Elliott, the lead lawyer for the purge class action and LGBTQ2S+ activist during a press conference. While the federal Liberals have vowed to follow through on culture change government-wide, he said, they “want to see action.”


Commemorating the 30th anniversary of the lawsuit to end the discriminatory federal policy, survivors including Michelle Douglas and Martine Roy held a series of meetings this week with government officials, including Prime Minister Justin Trudeau.


The purge saw thousands of lesbian, gay, bisexual and transgender Canadians actively discriminated against, interrogated, and fired or demoted from their jobs in the Canadian Armed Forces, the RCMP, and the federal public service between the 1950s and 1990s.


Douglas recalled during Thursday’s press conference how she was thrown out of the military in 1989, after numerous interrogations and her eventual admission she is a lesbian. She then brought a lawsuit against the government and the Canadian Armed Forces, which she won in 1992, marking the beginning of the end of federal policies she described as “overt discrimination.”


Alongside a national apology in 2017, the federal government committed to providing millions in compensation as part of a class-action lawsuit settlement with members of the LGBTQ2S+ community who, like Douglas, had their careers ended or sidelined by what Trudeau has called “a campaign of oppression.”


The landmark $145 million settlement was finalized in June 2018, seeing millions more earmarked to create a national monument in the nation’s capital as well as for memorial and archival activities.


Stemming from the settlement, last year the ‘Purge Fund’ — a non-profit corporation responsible for managing the funding — issued a report called “Emerging from the Purge” that included 23 recommendations for further action the federal government should take to support “systemic change.”


After a year of consulting community experts, as well as the public service, RCMP and Canadian Armed Forces about the state of training, equity, diversity and inclusion efforts, survivors called for the Government of Canada to:


As part of Canada’s first-ever federal LGBTQ2S+ “action plan,” presented in August by Women and Gender Equality Minister Marci Ien, the government has committed to implementing the calls for change stemming from the class-action and the 2021 report, without concrete timelines.


Douglas — who is now the executive director for the Purge Fund — said Thursday, while work is underway within “a number” of departments and agencies including the Department of National Defence, there’s still a lot of work to be done to ensure all federally-employed LGBTQ2S+ community members feel safe and supported to fully be themselves at work.


Calling out the RCMP specifically, Elliott told reporters that he thinks it’s “going to be hard work… especially in certain sectors of the federal civil service.”


“If you look at the historical records, they fought tooth and nail to persecute LGBT people,” he said.


“There has never been a serious effort to change that culture. That’s what we need. We don’t need sweet words. We need action, and we need real change. Canadians deserve it, otherwise the legacy of the LGBT purge will live on forever.”