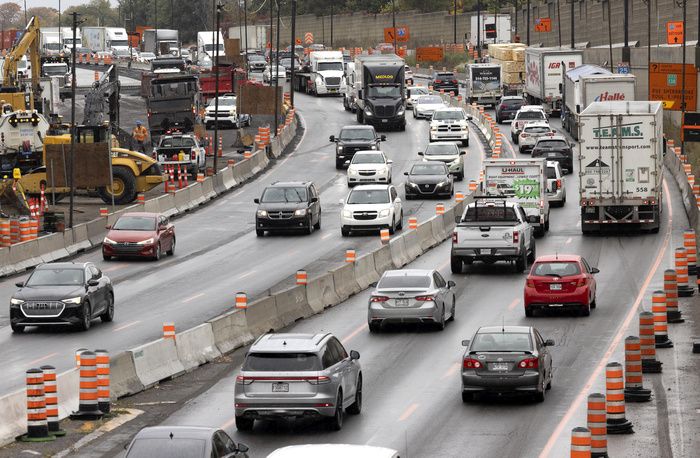 The traffic headaches caused by the Louis-Hippolyte-La Fontaine Tunnel partial closing could be made worse by the lack of co-ordination between different transit authorities.

Starting Monday, three of the tunnel’s six lanes will be closed for three years as a $2.3-billion overhaul accelerates. Of the three remaining lanes, two will be in the direction of Montreal and one to the South Shore.

Newly minted Transport Minister Geneviève Guilbault visited the construction site on Thursday, once again urging people affected by the closing to find a “plan B.”

But in addition to the tunnel partially closing, the Victoria Bridge will now also be at half capacity for the first month of the construction work on the tunnel — instead of returning to full capacity at the end of September as CN had planned.

“Of course it’s disappointing, a bit like the REM being postponed,” Guilbault told reporters following her visit. “It would have been interesting if the REM had been up and running in December as planned, but these are realities beyond our control that we have no choice but to deal with.”

And after reporting nearly 250,000 users this summer, the Autorité régionale de transport métropolitain (ARTM) announced this week that it was extending the free river shuttle service between Boucherville and Promenade Bellerive park, a little east of the tunnel.

This option, however, does not offer any connection to downtown Montreal or a métro station.

However, those shuttles are no longer in service.

“There were contractual reasons why the ones in the Old Port had to be stopped,” explained Jean Séguin, deputy minister of transport.

“We plan to put the shuttles back into service in the spring,” Séguin added. “And we will try to see with the Port of Montreal and the infrastructures on the South Shore if we can stretch the season as much as possible, that is, earlier in the spring and later in the fall.”

Despite the frustration, it doesn’t mean nothing has been done to help motorists affected by the tunnel closing.

Park-and-ride lots have been built along Highway 20 and users will be provided with a free shuttle bus service to the Radisson métro station, where they will be given free passes to take the métro. These shuttles will use a dedicated lane that will also accommodate cabs and carpools.

An additional métro train has also been added to the Yellow Line, between Longueuil and Berri-UQAM, and buses have been added in different sectors that are likely to be hit the hardest.

Ultimately, Guilbault acknowledged it’s not going to be easy for anyone — “I’m not expecting a miracle,” she said — and again called on companies to allow employees to work more flexible schedules.

But she also dismissed the idea, for now, of barring cars with no passengers during rush hour, as has been suggested this week.

“We’re not at a stage right now where we want to ban or force anything,” Guilbault said. “But it’s a very strong recommendation. We’ll wait and see how it goes on Monday.”