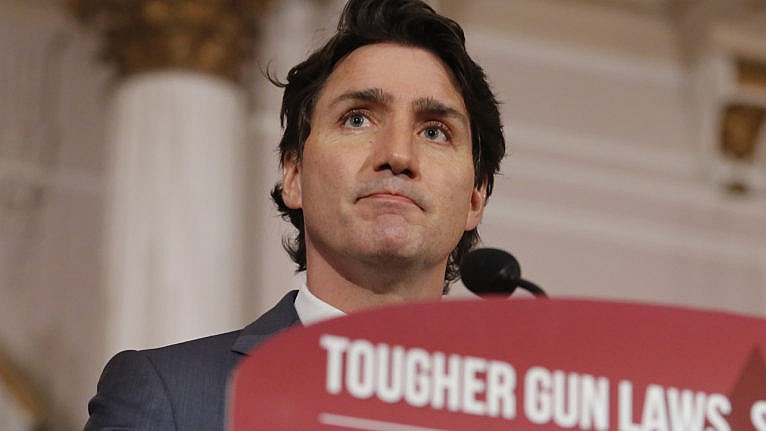 Welcome to a sneak peek of the Maclean’s Politics Insider newsletter. Sign up to get it delivered straight to your inbox in the morning.

The Liberals tabled gun control legislation Monday that would freeze the purchase, sale, importation and transfer of handguns in Canada, CBC reports. The proposal would limit the number of handguns in Canada, Justin Trudeau said:  “In other words, we’re capping the market for handguns. As we see gun violence continue to rise, it is our duty to keep taking action.”

The government is also pledging to start buying back thousands of banned assault weapons before the end of the year; to require magazines for long guns to be changed so they can’t carry any more than five rounds; and to increase the maximum penalty for firearm offences.

Disconnect: The top ranks of the armed forces are “incapable” of recognizing the a culture that has entrenched sexual misconduct, according to a blistering new report from Louise Arbour, Global reports.

“Firmly entrenched in its historical way of life, the military has failed to keep pace with the values and expectations of a pluralistic Canadian society, increasingly sophisticated about the imperative of the rule of law,” Arbour wrote. “Operating as a totally self-regulated, self-administered organization, entirely reliant on deference to authority, it has failed to align with the ever-changing, progressive society we live in. This disconnect is a liability for the CAF and for Canada.”

Anita Anand said at a news conference Monday that she will appoint an independent official to oversee the implementation of all 48 of Arbour’s recommendations.

Another case: As Arbour released her report, CTV reported that a retired Canadian officer has been found guilty of sex assault aboard a navy tall ship more than a decade and a half ago.

Rate hike: The Bank of Canada is expected to raise its benchmark interest rate by half a percentage point on Wednesday, CBC reports.

The price of everything from food to gasoline and housing has exploded during the pandemic, as supply and demand imbalances brought about because of COVID-19 have coupled with record-setting amounts of stimulus cash to fuel inflation. Officially, Canada’s inflation rate sits at 6.8 per cent, its highest level in 30 years. Costs for basic necessities, like putting food on the table and keeping a roof over one’s head, have gone up by even more, with food and shelter rising 9.7 and 7.4 per cent, respectively, in the past year.

Motion fails: A Conservative motion calling for an end to public health rules in travel was defeated in the House on Monday.

Tightening? As we approach the June 3 membership sales cutoff in the CPC leadership race, the Post has an interview with pollster David Coletto, who thinks Pierre Poilievre may be facing headwinds.

Good news for Ford: A few days before Thursday’s Ontario election, a Toronto Star poll aggregator says Liberal Leader Steven Del Duca is likely to lose his own riding and Doug Ford is about to win another majority.

If the vote were held today, the PCs would end up with 36.9 per cent of the popular vote, ahead of the Liberals’ 27.2 per cent and the NDP’s 22.7, with 6.9 going to the Greens. That would translate into 75 seats for the PCs, 28 for the NDP, 20 for the Liberals and one seat for Mike Schreiner’s Green Party.

Bad theatre: At a weekend CAQ convention, François Legault said he would be seeking more power for Quebec to manage immigration because it is an existential threat to the province’s future. Columnists Paul Journet, in La Presse, and Josée Legault in Le Journal de Montréal, both write that the quantity of immigrants involved do not seem to warrant Legault’s intense rhetoric, and it is not clear what the political benefit will be. (Journet translation Legault translation.)

Toews watch: Longtime Alberta political columnist Graham Thomson writes in the Star that all eyes are on Alberta Finance Minister Travis Toews — a Jason Kenney loyalist — as a candidate for next UCP leader. So far, Brian Jean and Danielle, both former Wildrose leaders, are the only candidates in the as-yet unofficial race.

Ford vs. Kenney: In the Globe on the weekend, Kelly Cryderman had a thoughtful piece comparing Kenney and Ford, pondering why one of them managed to weather the pandemic and the other did not.

But these differences are only part of the story, as comparing governing in Ontario and Alberta is not comparing apples and apples. Mr. Ford might not have fully understood the PC party he became leader of in 2018 – which had been shaped in large part by his predecessor Patrick Brown – but compared to the nascent UCP, it was far more cohesive. Mr. Kenney also faces a much stronger political adversary in the popular Alberta NDP Leader Rachel Notley, who has already served as premier, than Mr. Ford faces in the Liberals or the NDP in his province.

Ng investigation: The federal ethics commissioner has opened an investigation into a $17,000 contract International Trade Minister Mary Ng’s office gave to a company co-founded by her friend Amanda Alvaro, CP reports. On Monday, Mario Dion says he will examine the matter to see if Ng put herself in a conflict of interest, used any influence to advance someone’s private interest, and recused herself from the decision.

Destruction, dysfunction: Former top public servant Paul Tellier says mistrust between the civil service and politicians, and centralization of power in the PMO, are “destroying the public service,” Kathryn May reports in Policy Options.

Off the Hill: Canadian Heritage has announced that Canada Day celebrations will be held at LeBreton Flats Park, west of Parliament Hill, rather than in the parliamentary precinct, CP reports.