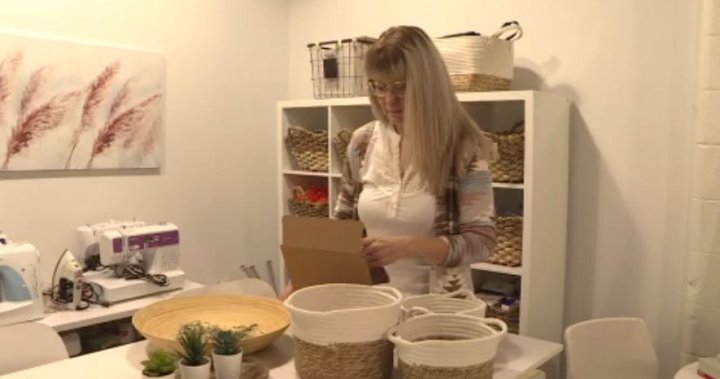 As Lorrie Lawrence walks through the empty Downtown Farmer’s Market in Edmonton on a Tuesday morning, it’s eerily quiet. The lights are turned off and blankets are draped over vendors’ tables.

Lawrence steps into the century old elevator and exits on the second floor. As soon as the doors open, big dream catchers appear, and the natural sunlight illuminates the I. A. M. Collective booth.

“Our membership is composed of members as young as 17 months. We have a jingle dancer as old as 89 years old. Agnes Jones comes here every Saturday. She is a residential school survivor, the most amazing inspirational person to talk to,” Lawrence said.

“In between that, we have single parents, students that are trying to supplement their school income or just have enough money for their kid’s birthday party.”

Calgary Indigenous art exhibit promotes reconciliation: ‘This is part of my healing’

Lawrence said four-and-half years ago, the Indigenous Market Artists Collective started as a group of four with a single tent at the market. Now the collective has grown to more than 100.

“I remember when I was young people didn’t go out of their way to say they were an Indigenous-owned business. Now people are proud to say that.”

The collective allows artists to share vendor costs at an event. The goal is to lift up artists and also educate consumers to buy authentic and ethically made Indigenous pieces instead of mass-produced items.

“I started out with the intention to teach people around us about appreciation — to appreciate and not appropriate — and to show the world around us there is a vast abundance of Indigenous artists, entrepreneurs and performers that are around that you don’t have to buy mass produced,” Lawrence said. “If you choose to, that is fine, but as a shopper, as a consumer, you need to be aware of what you’re buying,” she said.

“Since 2018 until now, we have helped a lot of people become conscience shoppers.”

Lawrence said the collective has given artists confidence. Some have even quit their current job to pursue a full-time career in art.

“It’s important they have pride and they have a home. You see some many of them now have their own business cards and their own table set up and displays and everything, whereas four or five years ago, they were selling out of their backpack.”

Lawrence hopes one day the collective will have its own brick and mortar store.

The idea to make candles, smudge kits and smudge spray to help Indigenous people find connection to their culture has stuck with Delanie Bulldog for years.

About four years ago, she decided it was time to act on it and start her own business, Kookum’s House.

“This was a labour of love and it’s a tribute to my mother who was a residential school survivor.

“I wanted it to be something that carried forward everything she taught me.”

For about a year, she made smudge spray, candles and smudge kits out of her kitchen. Demand grew and a year later, she found herself with her own store front and space to make her products.

“This, to me, speaks volumes to the work that we are doing and it gives me the purpose,” Bulldog said.

“It helps me move forward and keep moving forward that we can keep finding ways to put ourselves out there, make everyone know that we are here so that they can come to us and provide that meaningful connection for them.

“Kookum’s House offers a connection and a reconnection for those that have never been connected to our culture, our ceremonies and our practices.

“Due to intergenerational trauma, there is a lot of impact there with the Sixties Scoop and the residential school system and the day school system. There is also those that were connected and lost that connection.”

Bulldog is Cree and Dene. She moved to Edmonton 28 years ago from northern Alberta, and has noticed a significant shift in Indigenous-owned businesses and services.

“When I first came here with my own family, the access wasn’t readily available for us. It wasn’t just for the retail portion; it was also for community programs or community awareness.

“Seeing it grow from 28 years ago until now, exponentially, it’s been amazing.”

Bulldog has been able to benefit from that shift. She said her business relies mostly on word of mouth and attending markets in and around the city. Her products so popular they are now sold internationally.

It’s not just about retail. Bulldog is hoping to use her connections to educate.

She started workshops during the pandemic over Zoom, and now has expanded her space to include room for people to come and learn in-person.

“I built a series of workshops around intergenerational trauma, truth and reconciliation, and even smudging protocols,” Bulldog said.

In late September, she hosted a class showing people how to make ribbon skirts.

Bulldog only hopes to build on the education component at Kookum’s House. Currently people are able to come into the store by appointment only, but Bulldog wants to be able to create a safe space for her customers.