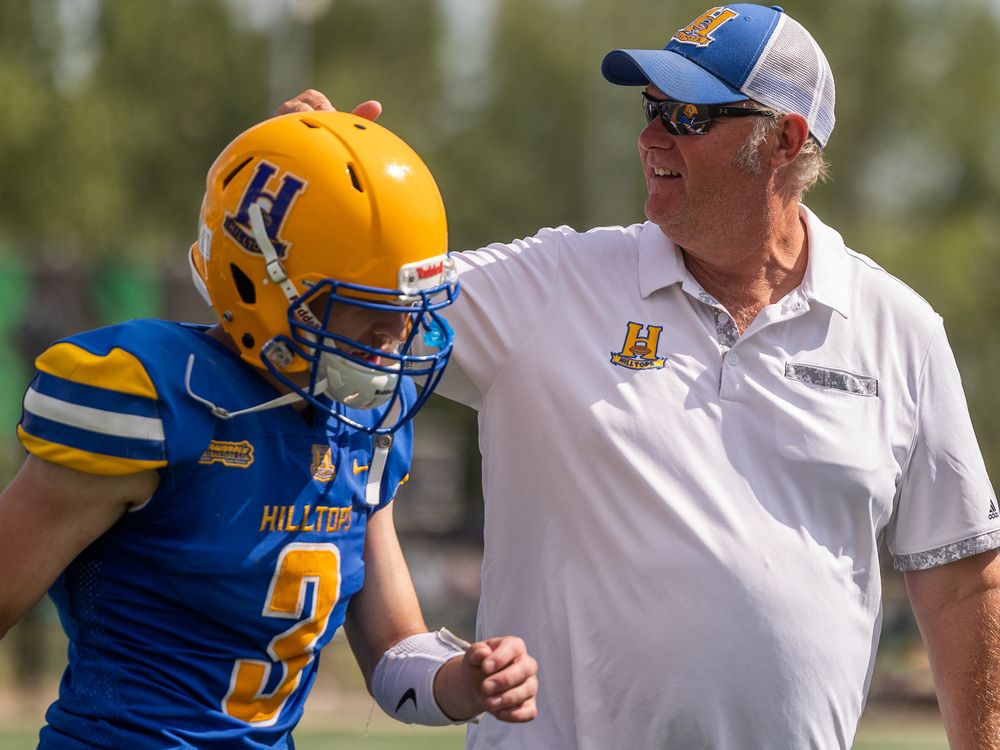 That’s the message Saskatoon Hilltops head coach Tom Sargeant is sending his players as they try to snap a rather rare — at least for them — three-game Prairie Football Conference losing skid this weekend in Calgary against the Colts.

“The line I used with the team when we had our kickoff meeting a few days ago is ‘I’m done with the try-harders — I don’t need people trying harder anymore; I need guys to play smarter,’ “ stressed Sargeant, whose team visits Calgary on Sunday afternoon.

“We’ve got to stick to the plan, execute the plan. If we do that, then we’ll have a better sense of who we are and what we are.”

As of right now, the Hilltops are a fourth-place team tied with the Colts in the Canadian Junior Football League’s Prairie Football Conference. Both teams sport a 2-3 record.

“We’re still not properly executing our defensive schemes, our offensive schemes and special teams schemes,” said Sargeant. “We took four penalties — four holding calls — on punt returns (last Saturday against Regina). That’s brutal. If you can start cleaning some of those things up, then those little things will become big things. When we get all that right, this will be a different team.”

Right now, it’s different in other ways. Under Sargeant, who took over as head coach in 1998, the Hilltops had never endured a three-loss season, let alone three losses in a row, until now.

“Got to have firsts,” quipped Sargeant, whose team is in danger of missing the playoffs with another loss Sunday.

“At the end of the day, I get the opportunity to coach young men, get an opportunity to get them ready for Calgary. We’ve just got a lot of work to get better. That’s healthy. It’s real. It’s not how you start the race; it’s how you finish it. We’ve certainly got our goals in front of us and nothing more important than getting better.

“They’re in full pads all week again and we’re going to practise football. When they get out on Sunday, we need to play football between the lines the way the Hilltops play football. We need to teach and coach better and put this whole thing together.

The Hilltops have been in trouble offensively this season. They’re fifth among six PFC teams in points scored, first downs and passing yards.

“The big thing for us is being situation smart, understanding situation, knowing what’s needed and not going outside our job,” said Toppers offensive co-ordinator Shane Reider. “The effort’s fantastic but they maybe try to do more than what they’re capable of, then we get a bad holding call, miss a block at a key time, not make just a catch — we had a couple of missed catches the first time against Regina and if we make one of those catches, we win the game. We’re right there. We’re just used to guys making those plays. We’re not making those plays right now.”

Defensively, the Hilltops have given up a lot of yards through the air.

“If you just want to look at the analytics, we’re not productive enough and putting the ball in the end-zone,” admitted Sargeant. “Defensively, we’re giving up a lot of pass yards and a lot of open things there.”

Sargeant said he isn’t even thinking ahead to playoffs.

“We’re working hard and figuring out who’s going on the bus when we leave Saturday morning,” he said. “We’re grinding and the players are grinding.

“This isn’t a very happy place right now. That’s okay. You know, you learn way more in adversity than you do without; you learn way more at the bottom than at the top. Right now, we’re there and we’ve just got to hope this is ground zero, then we can start climbing that mountain again. If we’re not, then there you go and other things come into play.

“Right now, when you’re on a three-game losing skid, it hits you deep … At the end of the day, I believe it’s real simple to fix. The problem is, we haven’t fixed it yet.”

While Sargeant said he hasn’t lost confidence in his players, there will be an influx of youth this Sunday.

“There are some young guys who are going to start this weekend for sure,” he said. “That’s a cool thing to see. We’re uncovering every stone and turning everything over just to see if we can find that spark that ignites what this team should be. There’s more than enough talent all across the board.”