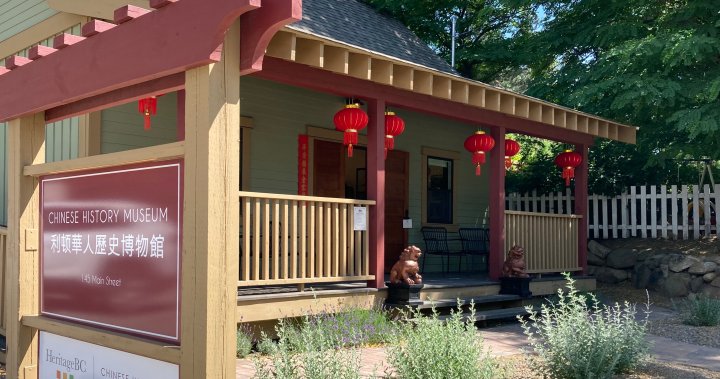 Twelve months after a fire destroyed the community of Lytton in B.C.’s Fraser Canyon, residents and business owners are still waiting to rebuild. Everything was destroyed in the fire. Lytton needs to literally rebuild from the ground up.

This is a tiny community, population 250, but its history is extensive and rich. Indigenous peoples have inhabited these lands for millennia. There are archaeological records that need to be carefully logged before the village is rebuilt.

1:36Rebuilding Lytton for a much hotter, more dangerous future

Rebuilding Lytton for a much hotter, more dangerous future

Then there is a more recent, lesser-known history — Chinese migration to the region.

Documenting local Chinese history has become a passion project for Lorna Fandrich. She’s a longtime resident who, along with her husband, runs a rafting company in town. But after learning that a property she owned in the village used to be a Chinese temple, she decided to take on a different project – building a museum dedicated to Lytton’s Chinese history.

It’s my “retirement baby,” Fandrich told Global News. “It’s been very rewarding for me because I started with a little paper drawing” to create the museum.

It became a labour of love. “I became attached to it, like people similarly get attached to their book collection.”

Before the fire, she recalls, visitors would come to Lytton and be curious about the Chinese lanterns hanging outside the building. “Occasionally they think ‘Oh maybe this is a Chinese restaurant.” Many visitors, she says, are surprised to find that there’s a museum dedicated to local Chinese history in as unassuming a place as the village of Lytton.

Trial by fire: What a village in B.C. is teaching the world about climate adaptation

The fire wiped out everything in the village, and engulfed the Chinese history museum in a matter of minutes.

Fandrich was lucky to escape. She was working in the basement of the museum on the afternoon of June 30, 2021, as the fire swept up from the south side of town. She made it out with seconds to spare.

“I was lucky,” she says unassumingly.

There were approximately 1600 pieces in the museum, everything from railway teapots to statues, pottery vessels and other ceramic objects. Everything was damaged, and almost the entire collection was lost, but not all.

Since the fire, Fandrich has been working with a salvage, recovery and training operation called BC HERN to recover as many of the pieces from the museum as possible. The group acts like a disaster assistance response team for museums, churches and other heritage sites. It also offers training to communities to prepare for the next disaster.

The Lytton fire was “an event that far surpassed any that we had ever assisted in before,” says Heidi Swierenga, a member of the organization, as well as a conservator at the UBC Museum of Anthropology. Swierenga describes the experience of coming to Lytton after the fire as “gutting.”

She says the group is used to dealing with “a broken pipe or misadventure in a storage room” but not “the complete and utter loss of entire buildings and almost-complete loss of entire collections.”

“It appeared to be that nothing was left, and you were wondering ‘What good could we possibly do?’”

In fact, they did a lot of good, salvaging just under 400 pieces. They spent hours picking up broken objects, and carefully wiping them down. Bringing fresh water into the site to clean objects was a challenge.

There were little surprises in the rubble that uplifted the team, and motivated them to keep digging. For example, in the corner of the museum’s foundation, a fallen tree had served as a protector for some of the objects.

But in the end, Swierenga says, “It was not so much the quantity as it was the quality of the pieces we found intact.”

The hardest part of the whole experience, says Fandrich, has been losing pieces that were personally connected to people who had donated to her.

Out of the 1600 pieces, about a thousand came from two elderly collectors who had donated their lifelong collections — gathered from various places in the BC Interior — to her. Other items came from a Chinese-Canadian family with roots in Lytton dating back to the railway construction days. They had donated some of their family’s personal mementos to Fandrich.

“They gave me some of their mom’s diaries, their mom’s wedding skirt, other artifacts,” Fandrich says. Losing pieces that had such important sentimental value to people has been especially difficult.

Despite the massive setback she’s suffered, Fandrich is committed to rebuilding.

Lytton is a village that needs all the support it can get, she says. “People have been reluctant to invest in Lytton because it’s such a small town.”

She’s received financial support from the Chinese community in B.C., and moral support from people in Lytton, who appreciate her effort to bring tourism and investment to the village.

The last thing she wants to do is pick up and leave, leaving Lytton with one less reason for people to visit.

“I’m still passionate about the story. I still want people to know about the Chinese contribution to BC [and] Canada.”