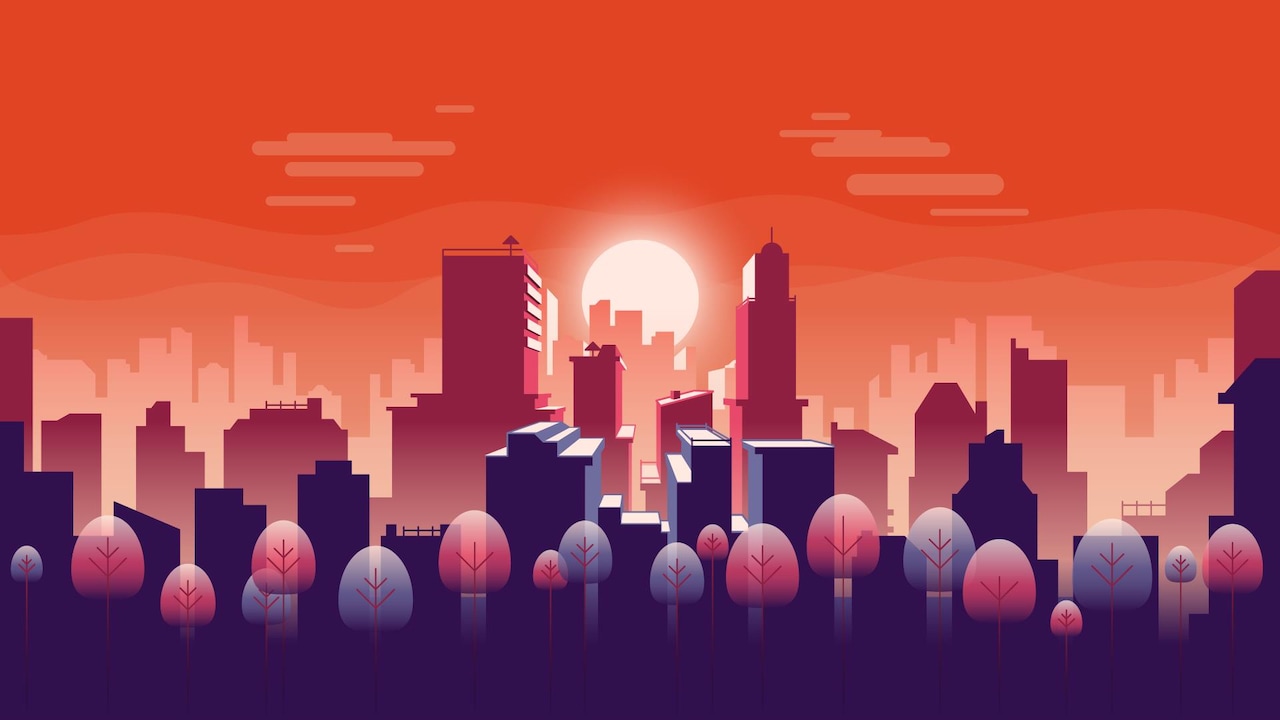 Each dot represents 700 residents on average, and the colour shows the hottest areas and the cooler ones.

You can swipe between cities at any time with the left and right arrows or with your keyboard.

We grouped these areas into 10 groups, from hottest to coolest. Their temperatures are estimated from satellite pictures taken between June and August from 2019 to 2021.

When we averaged the median income in each of the 10 groups, a trend emerged: the higher the residents’ income, the cooler their neighbourhood, especially in metropolitan areas with 300,000 or more residents.

We found something else, too: the more immigrants, the hotter the area. Again, this is mostly true for the biggest cities, where many newcomers live.

But why are some areas hotter than others? The lack of green spaces is an important factor, our analysis shows. The less vegetation, the hotter it gets.

“We often say maps of trees are maps of race and wealth,” said Carly Ziter, an associate professor of biology at Concordia University in Montreal who specializes in urban ecology, in reaction to CBC’s results. The physical mechanism of cooling, like what the trees provide, is among Ziter’s areas of expertise.

“This is evidence that there is injustice in who will be more vulnerable to climate change. Some people are fortunate to live in cooler parts of the cities that will be able to mitigate these heat waves in the future. And others aren’t.”

She adds that low-income residents living in the hottest areas are also the population group with fewer means to adapt, like buying an air conditioner. According to Statistics Canada, in 2019, six out of 10 households had a cooling unit. The lower a family’s income, the lower the likelihood of having AC.

According to our analysis, the proportion of low-income residents over the age of 65 is also the highest in the hottest areas of many cities. This is the demographic most vulnerable to heat waves.

How did we get our numbers?

Environment Canada weather stations are too scarce to provide a detailed portrait of our cities’ air temperature. This is why we calculated the land surface temperature of 17 metropolitan areas from satellite imagery. The total area covers 72,000 km2 with a 30-metre precision. We used the 2016 census to determine residents’ characteristics. For details, see the methodology at the bottom of this page.

In search of coolness

One solution seems quite obvious: planting trees, which would provide shade while growing. “But these hot areas have another common feature: they are dense,” said Jeffrey Brooks, scientific director of the Canadian Urban Environmental Health Research Consortium. “Where are you going to plant a forest? There isn’t any room.”

Brooks notes that density is also correlated with rental prices. In an urban context, a small apartment in a big building will be less expensive than a house with a garden. And low rent attracts first-generation immigrants and low-income families. “We really are struggling to deal with the densification of our cities while having green spaces and affordable housing.”

Even when there is space, planting trees or adding a park can trigger unwanted consequences. “You can create green gentrification,” explained Isabella Richmond, a PhD student at Concordia working on these issues under the supervision of Prof. Ziter. As these areas become more green and desirable, rents are likely to increase, and current residents could be displaced.

“It would again reinforce who lives in the green areas,” said Richmond. “We need to implement social and housing policies that go hand in hand with greening policies. For example, [a rule saying] you couldn’t immediately increase the rent after transforming a neighbourhood.”

Between June 25 and July 1, 2021, a heat wave scorched British Columbia and 619 people died because of the temperature. An analysis conducted by the province determined that the deaths mainly occurred in low-income neighbourhoods with few green spaces. Most of the victims were seniors who died in their dwellings. They also had another characteristic: they were isolated.

“We can probably avoid heat deaths just by making sure that we know where our vulnerable people live,” said Jeffrey Brooks. “One reason why people die is that they don’t have anyone who looks after them, and I think the heat dome out west proved it again.” We can reclaim parking space and green our rooftops, but we also need to build social cohesion, Brooks argues. “We need to think about community gardens, multi-generational housing and other projects that build social cohesion. It doesn’t take away that those areas definitely need improvements, and we need to invest in them.”

Unequal access to shade means marginalized neighbourhoods are more vulnerable to heat. Here’s how Canadian cities can save lives

And while cooling the outdoor air temperature will require a tremendous global effort, the land surface temperature can be reduced with local actions. “With one political decision, you can change the land surface temperature of an area,” said Philippe Martin, co-ordinator of an ultraviolet light program at Environment Canada and an expert on urban heat. To adapt to climate change, cities need more green and shaded areas. He said they would be more bearable if the streets were reconfigured to improve air circulation and the new buildings could avoid using construction materials that ended up trapping heat.

Brooks said that Canadian governments at all levels need to get serious about the problem. Canada has among the highest greenhouse gas emissions per capita in the world, he added. “What are we going to say in 30 years? That we are sorry and we didn’t know better back then? We do know better. If you aren’t treating your most disadvantaged people properly, it’s not inherently sustainable.”