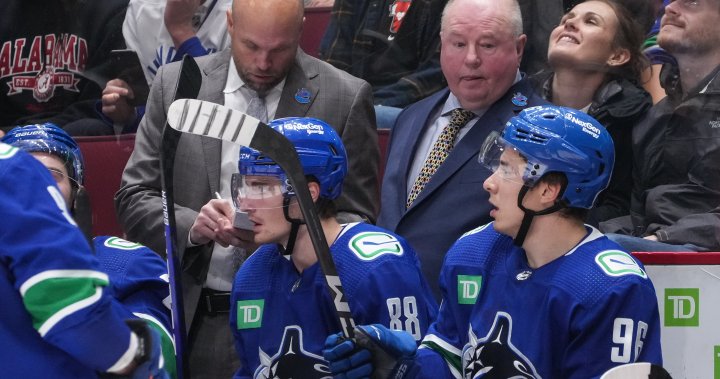 Speaking with reporters in Vancouver on Wednesday, Allvin said he has good communication with Bruce Boudreau and the rest of the coaching staff, and will continue working with them to find a way to improve on the Canucks’ 0-5-2 start.

“At the end of the day, we need to start winning hockey games. That’s the bottom line.”

Vancouver is the lone team in the league that has yet to post a victory in the 2022-23 campaign. The Canucks also set a dubious record, becoming the first NHL team to lose its first four games of the season while giving up multi-point leads in each.

Forwards Brock Boeser and Curtis Lazar were added to the injured reserve list on Wednesday, joining defencemen Quinn Hughes and Travis Dermott. Blue-liner Tucker Poolman has been placed on the long-term injured reserve.

Boeser and Hughes “shouldn’t be out that long,” Allvin said, characterizing their injuries as being day-to-day. Lazar has been sidelined after trying to play through an injury he suffered in an early game and is expected to miss three to four weeks, he added.


Forwards Sheldon Dries and William Lockwood have been called up from the American Hockey League’s Abbotsford Canucks.

“If you want to be a good team in this league, you’ve got to have the next-man-up mentality,” Allvin said.

“And I think the players that have been coming up here have shown that they’re capable of playing games. I don’t think that’s been an issue.

“I think we need to have our top players kind of buy in and be the top players every single day you walk in here to the rink. I think that’s the difference right now.”

Several of Vancouver’s top-six forwards have yet to score this season, including Boeser, Tanner Pearson and Nils Hoglander. Illya Mikheyev, a speedy former Toronto Maple Leafs winger the Canucks acquired in free agency, has a single assist in four games.

3:44Meet the artist behind the Canucks Diwali jersey


“I think we’re a talented team, but we need to get this team and this group to play together as a group and a team,” Allvin said.

Vancouver’s front office is always looking at options for improving the roster, the GM said, but he stopped short of committing to a full rebuild of the team.

“It’s interesting, the rebuild word,” Allvin said. “I’ve been part of a rebuild. I came in late (with the Pittsburgh Penguins) and we were able to rebuild and win three Cups.

“I still think that we’re building something here (in Vancouver) every day. We’re not done.”


Some Canucks fans seem to be nearly done.

Many showed their displeasure with the team at Saturday’s home opener, booing the team off the ice following a 5-1 loss to the Buffalo Sabres. Three jerseys and a hat were also tossed over the glass.

“I’m as frustrated as (fans) are, not winning hockey games,” Allvin said. “But we’re in this and I guarantee that every single player and staff member here wants to turn this around.”

The Canucks next chance for a win comes Thursday night when they take on the Kraken in Seattle.