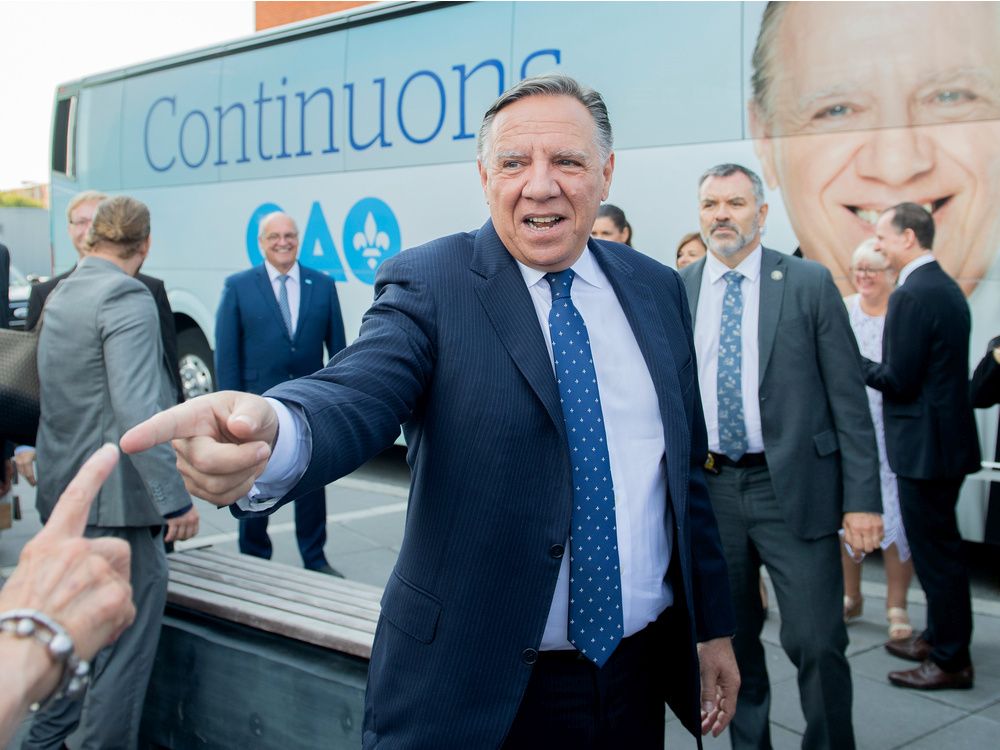 QUEBEC — It has crept on him quietly, but François Legault is now the longest sitting member of the National Assembly.

First elected in 1998 as the Parti Québécois MNA for L’Assomption, Legault is now on the record as holding a seat in the legislature for 20 years, six months and 19 days as of the moment the lieutenant-governor dissolved the 42nd legislature on Aug. 28, launching Quebec into an election.

That makes Legault, leader of the Coalition Avenir Québec, the elder statesman of the legislature, a record he will get to further extend should he win the Oct. 3 general election and resume his work as premier.

Legault, who turned 65 on May 26, has no real issues with his age except to say he tires a bit quicker when he plays tennis with his sons. In his campaign speeches, he likes to mention he and his wife, Isabelle Brais, have been married for 32 years.

Legault jokes about wanting to seek not only a second mandate as premier, but maybe a third. He likes the work that much.

“Two conditions,” Legault said Sunday at a campaign stop in L’Assomption when asked about a third mandate. “The support of the population and second, my health.”

But in this, his fourth campaign as a leader — the other party leaders are greenhorns in this matter — Legault seems more resolved than ever to put his stamp on Quebec, as if to make up for time he lost in the first one managing the COVID-19 pandemic.

“One reason he wants to win this election is to able to concentrate on other things than the pandemic,” Legault’s longtime chief of staff Martin Koskinen said in an interview with the Montreal Gazette. “He has the impression that he was practically robbed of about three years of his mandate.”

It was not enough to adopt such landmark pieces of legislation as Bill 21 on state secularism and Bill 96 overhauling the Charter of the French Language. Legault is also proud to have reduced the wealth gap between Quebec and Ontario at the same time as having reduced taxes while continuing to pay down Quebec’s $160-billion debt.

Koskinen does not refute the idea, like it or not, the pandemic will be part of Legault’s longterm legacy. It made him a star with many Quebecers who were happy he was that steady hand at the helm, the “bon père de famille” doing his best to save lives.

For others, he is the person who took away freedoms and imposed masks, vaccinations and commercial shutdowns. Many of those Quebecers are gravitating to the Conservative Party of Quebec, which portrays itself as pro personal freedom.

Quebec has a history, however, of premiers being at their best in a crisis and Legault was no exception, scoring record-high approval ratings just when a locked-down Quebec was in the depths of despair.

Lucien Bouchard, the premier who steered Quebec through the 1998 ice storm, said in March he thinks Legault was the right man at the right time.

“Five years ago, who saw him there?” Bouchard said. “We are lucky to have a premier like François Legault.”

Koskinen said the pandemic was also a wakeup call for Legault, who learned something about managing Quebec and its notoriously unwieldy health bureaucracy.

“Sometimes, even when you are premier, you have a feeling of being powerless,” Koskinen said. “In the pandemic he would have liked to fix things (that were not working) faster. He realized the limits of the job.

“When he says these days he is humbler, it is in the sense that he can say things as premier but they don’t necessarily happen. As the expression in English goes, it can be lonely at the top. He realized, when all is said and done, that he is responsible.”

You could argue, however, Legault, as a former cabinet minister with a knowledge of government, was well-equipped to step into the crisis. And it was not an easy situation. As veteran journalist Alec Castonguay revealed in his book on the first wave, Le Printemps le plus long: au coeur des batailles politiques contre la COVID 19, the pandemic took all of Quebec off guard. That wave of deaths in the CHSLDs will forever be a low point in the crisis.

Legault, who likes to call himself a pragmatist, was aided in the “getting things done department” by his past business experience.

By now, most Quebecers know Legault’s personal history: a self-made millionaire who co-founded Air Transat in 1987 at age 29. It was this part of his profile that caught the eye of Bouchard, who as premier recruited him in 1998 as his minister of industry and commerce even before he was elected.

Later, Bouchard would name him education minister. True to his nature, Legault — who admits patience is not one of his strong points — chose to rock the boat by trying to reform an intransigent ministry.

Legault is a Montrealer, more specifically from the West Island. He grew up in Ste-Anne-de-Bellevue, the son of the local postmaster who died young, at 59. His mother, Pauline, who still lives there at age 93, worked as a cashier on weekends at the A&P.

For many years after his financial success, Legault lived in a Victorian mansion in Outremont, selling it in 2021 to move into a condo elsewhere in the city.

As a top PQ personality, Legault’s belief in independence back then was steadfast.

As he tells it, however, like many others Quebecers he became disillusioned in what he said was the endless stale debate of sovereignty versus independence, which he argued was holding Quebec back economically.

That explains why, in 2011, Legault co-founded the CAQ, a rainbow coalition of federalist and pro-independence Quebecers who agreed it was time to get on with it. The party would go on to win 19 seats in its first election in 2012, adding three more in the 2014 vote.

What Legault calls the historic breakthrough came in 2018 when the party won 74 seats and formed a majority government. For the first time in many years, the Quebec government was neither PQ nor Liberal.

He has not looked back, distancing himself still further in this campaign from independence. In the Sept. 15 TVA leader’s debate, Legault raised eyebrows when he said the Liberals “have lost the monopoly over being opposed to sovereignty,” and that explains its lacklustre standing with Quebecers.

“The Liberal Party does not have a reason to exist anymore,” Legault said later, answering a question from the Montreal Gazette.

On the other hand, true to the CAQ’s coalition mantra, Legault said this week he thinks Quebec would be economically viable as an independent country — but at a cost.

The creation of the CAQ and the subsequent realigning of Quebec’s political system are part of Legault’s legacy, says Éric Montigny, a political scientist at the Université Laval. Quebec’s political discourse, for the majority anyway, has evolved into something more conventional — as in a battle between the left and the right.

“It’s clear it is the end of Yes-No politics,” Montigny said.

It was the PQ that got the first taste of this reality when, in 2018, it delivered its worst score ever and was reduced to 10 seats in the National Assembly.

“Now, it’s the Liberals’ turn to experience the realignment,” Montigny said in reference to the electoral troubles now plaguing the Liberals, which, for the time in recent history, struggled to present a full roster of 125 candidates in this campaign.

“Legault is the famous third way,” Montigny said. “His legacy is having put this option in power.”

Once in office, Legault took the next logical step, stealing the nationalism of his old PQ and merging it with the Liberal philosophy of sound economic management.

“He has integrated, into his discourse, economic pride,” Montigny said. “This would have been (late premier Robert) Bourassa’s dream come true.”

But while Legault has soared in areas he understood, the same cannot be said about immigration, secularism and language, critics say. His base francophone electorate support his actions, but over the course of his mandate, he’s hit turbulence with minorities.

Observers are not surprised particularly about Legault’s stumbles over immigration. In September, he had to apologize for apparently linking immigration with violence. This week, he said it would be “suicidal” for Quebec to allow more than 50,000 immigrants a year into the province.

“In saying false things, people walk away thinking, hey, maybe he’s right,” Lapointe said, adding the CAQ has never mastered the concept of charters of rights when it comes to its lawmaking.

Legault has conceded he sometimes gets things wrong.

“I am not perfect and people are starting to realize this,” Legault said in a Sept. 11 speech to his members in Drummondville. “I make mistakes. Sometimes I answer questions which I should not answer. When I make a mistake, I correct.”

The English-speaking community has a particular bone to pick with Legault. In the 2018 campaign, Legault and the CAQ appealed directly to the community, urging it to free itself from the Liberals, which have taken the vote for granted.

That did not happen in this campaign. Relations are chilly at best.

Plans for a televised English leaders’ debate were also scrapped after Legault snubbed the idea. There was one in the 2018 campaign.

Eva Ludvig, the new president of the umbrella minority organization the Quebec Community Groups Network (QCGN), said Legault met with them once after the election, but not since, despite a lingering anger in the community over the CAQ’s actions.

“It’s a disappointment,” Ludvig said. “He’s been ignoring the community, ignoring our concerns and, in fact, acting against the interests of the English-speaking community.”

Koskinen, however, argues the English-speaking community has not recognized when it comes to religious symbols and language, Legault has fought off more radical options than the ones included in Bill 21 and Bill 96.

“The job of the premier is to try and rally as many people as possible,” Koskinen said. “I don’t think anglophones perceive it this way, but it’s really what he tries to do.”

Koskinen invited the community to think of the bigger picture. The CAQ has to show Quebec is able to protect the French language and culture in the context of the Canadian federation because, otherwise, the idea of independence will take off again.

Koskinen said Legault has great respect for the English community, its institutions and success stories such as McGill University.

“We understand it (Bill 96) shook up anglophones,” Koskinen said. “The objective is to ensure the future of French but within Canada. This is poorly understood.”