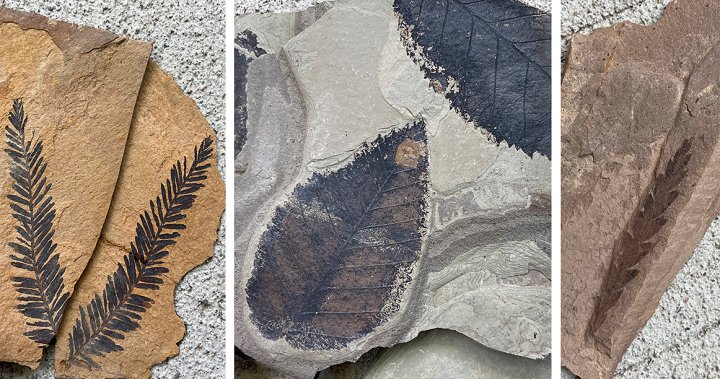 Looking for a quick getaway that’s close and offers something unique?

The Town of Princeton in B.C.’s Southern Interior is rich with fossils, and digging for them is encouraged.

The mayor of Princeton, Spencer Coyne, said the town has a huge fossil history, and that it dates back to the late 1800s.

“We’ve had a couple of really unique finds here,” said Coyne, adding locals have been digging for fossils as long as he can remember. “We have two species now that are only found in Princeton.”

“We’re talking about insects, plants and, if you’re really, really lucky, you’re going to find a fish,” the mayor continued. “You need to look for a shale outcropping. That’s kind of the key, looking for shale.

“You look between the layers of shale and you’ll find fossils.”

Kathy Simpkins, a volunteer at the Princeton and District Museum, said several papers have been written about the types of plant, fish and insect fossils found in and around Princeton.

The fossils range from around 50 million years ago, with Simpkins noting some are now extinct, while others have relatives living elsewhere in the world, but no longer in B.C.

“They’re Eocene fossils, so after the age of dinosaurs, but not long after,” said Simpkins. “The rock around here is 50 to 51 million years old, and the dinosaurs died out 65 million years ago.”

A satellite rendition can be viewed online of what the Earth looked like 50 million years ago.

At the time, Simpkins says the ocean was slightly closer to B.C., and the Cascade Mountain range had yet to form, resulting in a warmer climate despite being at a higher elevation.

“It gave this interesting mix of birch and pine along with sassafras trees and palm-like trees,” said Simpkins. “It’s not the usual forest you’d see here today.”

If unearthing fossils is for you, the first stop is Princeton’s museum, where examples of what can be found are on display.

“You can get it in your mind’s eye of what the rock will look like, the colours and the shape, whether it’s blocky or rounded. That’s really helpful for finding fossils.”

Simpkins says easy places to find fossils include gravel bars and sandbars along the Tulameen or Similkameen rivers, as long as it’s safe to do so.

“There’s lots of cobbles of petrified wood, and sometimes cobbles you can break open and find (fossils of) leaves, twig impressions and sometimes even an insect.”

Other places include banded stretches of rock near roads and highways, where sometimes rocks containing fossils tumble into ditches. Again, pending the location, safety is a priority as traffic can be nearby.

“Just that flat edge,” said Simpkins. “It’s flat enough to help split those layered rocks. Some people use a wide, flathead screwdriver. Sometimes people get excited and want to use a rock hammer and an actual cold chisel.”

Eye protection is also highly suggested, with Simpkins noting “sometimes you can get by without any heavy equipment at all. Sometimes they’re just laying there, waiting for you to flip the rock over and have a peek.”

The Princeton and District Museum is located in the downtown core, and is open from 10 a.m. to 4 p.m., every day during summer. And in it are fossils aplenty.

“People will come in and wonder if they have a fossil after finding something,” said Simpkins. “We try to help them out as best we can.”

“It’s a fun thing to do, looking for fossils,” she added. “If you have something interesting, or unusual or weird, bring it to your local museum, whether it’s Princeton or another place in B.C., and try to get it identified.

“Sometimes it does turn out to be a new species and you can get your name written up in a science paper, and it’s kind of cool.”

Fossil species named in honour of Manitoba paleontologist – May 31, 2022

Coyne says searchers have to be cognizant of private or protected property, but that there are a number of areas to dig for fossils along Highway 5A and around the community. He says the best deposits can be found alongside roads.

“They’re just about everywhere,” said Coyne. “Find a piece of shale, break it in half and you might just be lucky.

“If you’re into rock-hounding and looking for fossils, Princeton is one of the best places to be.”