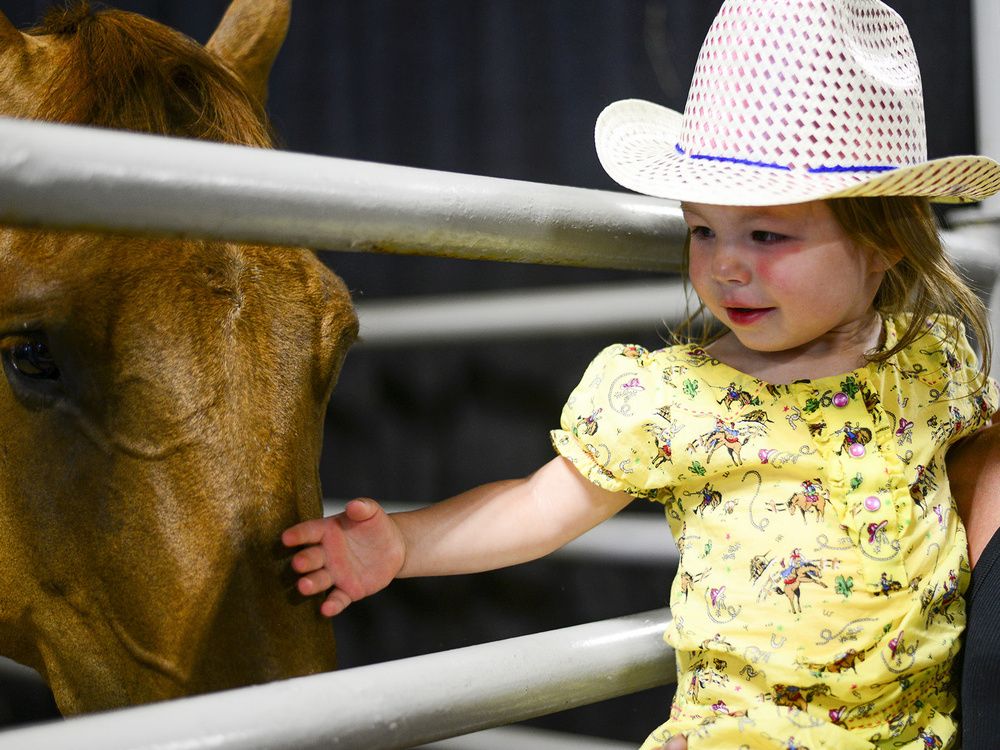 Calgarians love the Stampede. Not all of us, of course. But those are the outliers; the ones who escape to the mountains; ones who think all this cowboy kitsch is so down-market they sneer at the thought.

What other city, regardless of the economic climate, offers such a citywide spirit? Few of us are cowboys, many of us have spent careers riding a desk, but nobody is excluded if he or she wants to be part of the Stampede.

This Calgarian belongs to the more populous group — those who embrace the entire concept of playing cowboy dress-up. The Stampede also represents the longest love affair of my life, clocking in at 73 years to the day. The Calgary Stampede is also responsible for whatever optimism I cling to, including a deep-seated notion that I am still the luckiest person in the room.

It all comes back to today — Kids’ Day at the Stampede.

I’ve written about this before, more than once, and I probably will be writing about that magical day until I no longer can. Why? Because the memory is so clear; because it made me believe in good luck; because it set me free to roam the streets of Calgary — eventually the world — unencumbered by cautions.

Here’s essentially what I have written and it all still holds true: On a blisteringly hot July day in 1949, a four-year-old blonde girl’s life changed forever. That kid in the green two-piece gingham playsuit, her hair in fat ringlets, held the winning ticket on a bright blue CCM bicycle at the Calgary Stampede Kids’ Day.

Dad checked the ticket numbers, swept me into his arms and carried me down the seemingly endless grandstand steps to the stage. Ald. Don Mackay, who would become Calgary’s mayor after the November 1949 vote, gave me what would prove to be the only bicycle I would ever own.

I can still feel the heat from the stage burning through my sandals, still remember the feeling I must be the luckiest kid in the world. That feeling has stayed with me my whole life. Irrational, but so what?

Once I wrapped my pudgy little hands around the handlebars, a wave of glee swept over me. It took the combined efforts of the adults on the stage, including my father, to pry away my fat hands so that the boy’s bike could be exchanged for a girl’s, without the crossbar.

I remember concern gripping my greedy little heart: if I allowed them to take away the bicycle I had just won, I’d never see it again. The assurance the replacement would soon be delivered finally prevailed, but it was a tense few days until the promised version appeared.

Two wheels set me free. All attempts to keep me in the driveway were defeated by the simple fact the open road and the hills of Mount Royal beckoned. By the fall and my fifth birthday, I’d mastered the art of riding a two-wheeler and the appropriate hand signals. I was off, my mother’s warnings and threats if I left the front of the house falling on purposefully deaf ears.

Looking now at the same hills and roads, I marvel that fear and trepidation were alien concepts. I had a bike; I travelled.

What kid today would have such glorious freedom as offered years ago by a city where nobody seemed afraid of the dark, no kid worried about being kidnapped, or about talking to strangers, or, frankly, worried much about anything?

In the ensuing years, the Stampede has figured prominently in my working life: sent off by an editor to join a midway “girlie” show in the years before feminism became a fact; riding in the parade on the chuckwagon sponsored by the Calgary Herald; working in the Herald’s press office on the grounds; interviewing comedian Bob Hope who had telephoned the newspaper to inquire why no reporter had been dispatched to write about him — such gall I thought at the time. All this is part of one life in this city.

There are many reasons for love and loyalty, but few can be attributed to a single incident in one child’s life. That Kids’ Day is mine.

Such memories make the Stampede an integral part of my heart, as is the four-year-old who still lives inside me.

Catherine Ford is a regular columnist for the Calgary Herald.