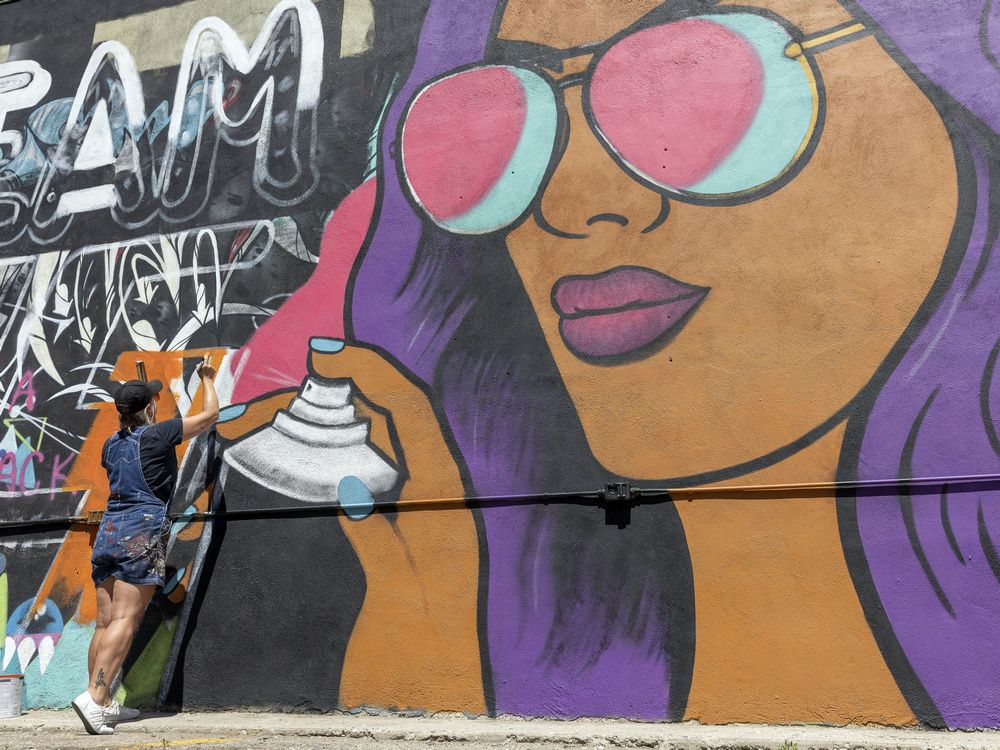 The bold prairie sun was in fine form Thursday, but Moose Jaw artist Carly Jaye Smith was embracing it, adding a new pop of orange to the south wall of Leopold’s Tavern.

The mural project is a totally new offshoot from Audacity YQR, which formed under the wing of Economic Development Regina (EDR). The brush strokes beginning Leopold’s makeover are some of the first to hit the bricks, kicking off the main phase of the project which is looking to complete 25 new murals and art installations in the city over the next five years.

Each mural will tell a story about the vivacity of changemakers in Regina, said EDR spokesperson Chris Bonk.

“Sometimes those things go unseen or unnoticed, so this is a great opportunity to create something visible that will make people stop and thin, and notice the great things happening in our city,” Bonk said.

Smith’s art graces the first Leopold’s to open in Regina on Albert Street near 15th Avenue, which has since expanded to include two more locations. The vision for the mural was “big bold colours and a message of inspiration,” something Smith said was exactly up her alley.

“That’s basically who I am as an artist, and so it just worked,” she said.

Standing in the middle of the parking lot outside the restaurant the eye is immediately drawn to a vibrant flow of purple hair belonging to a woman holding a can of spray paint. While not yet complete, Smith said the other side of the wall will boast stylized lettering that reads “Dream Big.”

“It tells a story of a girl, painting that message, for everyone to hopefully follow suit,” Smith said.

Smith was inspired by the Cathedral neighbourhood, of which Leopold’s sits just on the eastern edge. She was aiming for a vibe of “fresh and fun,” to match the community.

She said it’s very cool to be the first step in the movement. As an artist, Smith said the idea of partnering with local creatives to celebrate the beauty of the entrepreneurial spirit is incredibly fitting.

Public artwork is also a huge benefit to a city, as it works double-time to both beautify and inspire communities, she added.

“People can relate to a splash of colour on a wall,” Smith said. “A concrete, cinderblock wall does nothing for somebody, but if you can take some colour and a message and inspire them, make them smile as they’re driving by, I think you’re doing a good thing.”

Audacity YQR is still looking for both artists and businesses or property owners interested in partnering to help the project reach its goal.

“We’re starting to spread the word about it, and hopefully this is just the starting point,” Smith said.