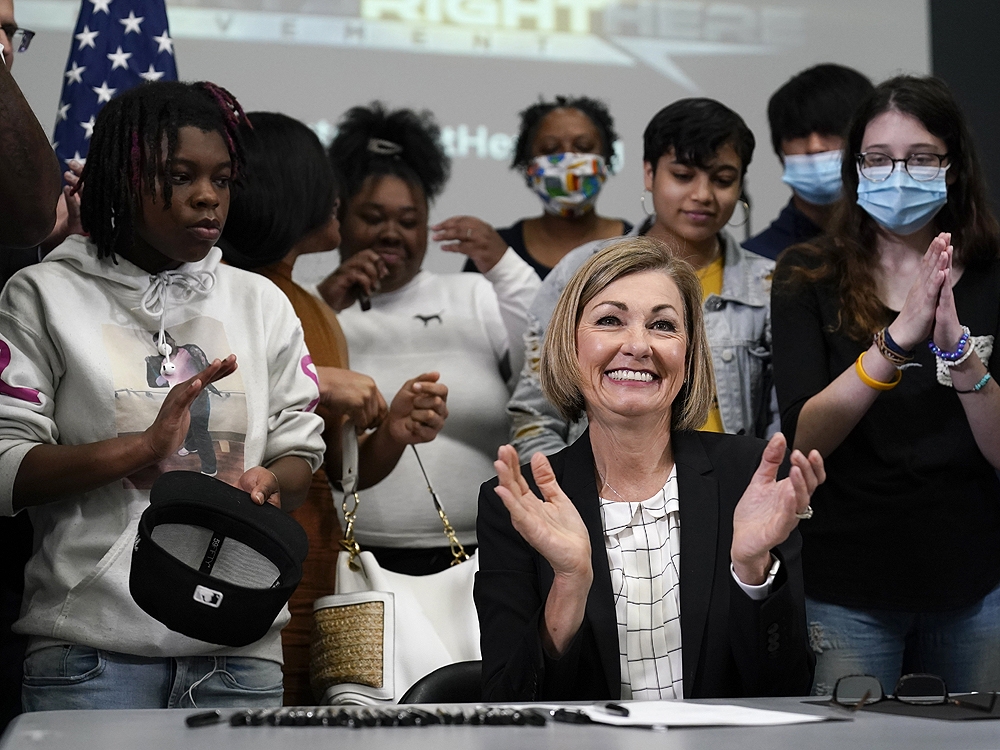 The Iowa Democratic Party chairman, a black man, levelled the charge against her.

Reynolds’ sin? She put out a political ad, over a week ago, attacking her opponent for what Reynolds considers bad Democratic policies. In response, the Iowa Democratic Party chair Ross Wilburn tweeted: “We need to call this what it is: a cheap, racist and dangerous stunt using harmful stereotypes to score political points.”

Did Reynolds’ ad denounce her opponent as “a low-IQ individual,” as former President Donald Trump called black Rep. Maxine Waters, D-Calif., a put-down that CNN legal analyst Jeffrey Toobin described as “racist”? Of course, it was not “racist” when Waters, a Cal State sociology major, questioned the intelligence of Dr. Ben Carson, the Yale and University of Michigan Medical School grad and the black former head of pediatric neurosurgery at Johns Hopkins and Trump’s choice for HUD Secretary.

Did Reynolds, as did President Joe Biden, denounce her opponent’s supporters as “extreme” adherents of “semi-fascism”? Biden, days later, added: “MAGA Republicans do not respect the Constitution. They do not believe in the rule of law. They do not recognize the will of the people. …. They promote authoritarian leaders, and they fan the flames of political violence that are a threat to our personal rights.”

(See my recent article, ‘What About Democratic ‘Election Deniers?‘)

No, Reynolds’ ad did nothing of the sort.

Oh, by the way, how is Reynolds doing as a governor? In a July 2022 Des Moines Register poll, Reynolds held a 17-point lead over her opponent.

The libertarian Cato Institute grades governors, A through F, based on their tax and spending record. In 2020 — the last Cato report card — Reynolds received an A, one of only four governors to score that high.

So, what in the name of Adolf Hitler/fascism/the KKK did the “racist” 30-second ad actually say and depict?

Well, it starts out with Rep. Cori Bush, D-Missouri, who is black, saying, “Defunding the police has to happen.” Then it cuts to Reynolds, sitting at a table, who says: “Watching the news, you wonder. Has the rest of the country lost its mind?”

Reynolds then says: “Attacks on the police. Open borders. Paying people not to work. Aren’t you glad you live in Iowa?” This was accompanied with three quick visuals: a violent street protest; a video of the southern border being overrun; and a sign that reads “From Work To Welfare.”

The last 10 seconds shows Reynolds walking down a Main Street-like sidewalk and passing small business storefronts. She says: “Here we still have common sense. We kept businesses open and kids in school. We cut taxes, support our police. Because in Iowa, America still works.”

No pickup truck dragging a black man chained to the bumper? No cross burning on the suburban lawn of a black Des Moines family? No fist-shaking mob of Aryan brothers waving the Confederate battlefield flag while marching in the middle of the street in a black neighborhood?

I promptly challenged Wilburn, via Twitter, to a debate at a time and place of his choosing. I want him to enlighten me on exactly how and why a normal, sentient human being could deem this standard political ad “racist.”

So far, no response from the chairman.