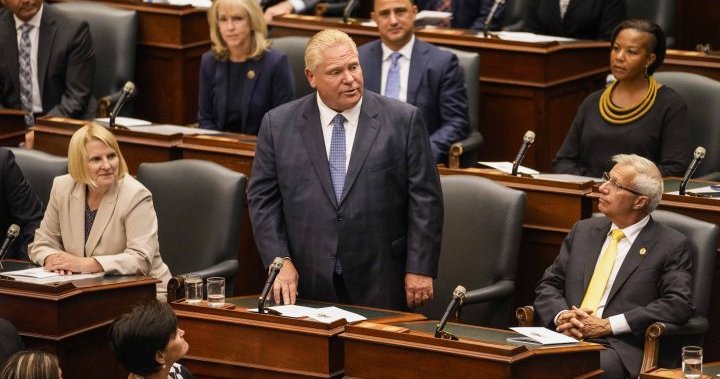 Ontario Premier Doug Ford has accused interim Liberal leader John Fraser of “hiding in his basement” during the so-called Freedom Convoy occupation of downtown Ottawa — a time when Ford admitted he went snowmobiling in cottage country.

Ford, who is facing increasing pressure to testify at the Emergencies Act inquiry in Ottawa, lashed out at members of the Official Opposition at Queen’s Park as they grilled the premier on his attempts to resist giving testimony under oath.

In a seemingly unscripted moment during Question Period, Ford attacked interim Liberal leader John Fraser while making claims about his own whereabouts during the occupation.

“As the public saw, I was out there nonstop speaking to the people. The member from Ottawa, he’s hiding in his basement,” Ford said.

The premier then accused Fraser of being part of the “most politically corrupt government this province has ever seen.” He was forced to withdraw the comment by the speaker.

Lawyers for the province have filed documents with a federal court pushing to have a summons for Ford and former solicitor general Sylvia Jones to testify squashed. The documents argue Ford and Jones have parliamentary privilege and should be excused from testifying to the committee under oath.

If the province fails to block the summons, Ford is scheduled to testify in Ottawa on Nov. 10.

Conservative insiders told Global News while the premier’s team is adamant that his testimony isn’t required to determine whether the federal government’s use of the Emergencies Act was justified, there is also concern about the premier’s ability to remain on message.

Insiders say the premier can be unpredictable under pressure and could say something under oath that could raise additional questions.

Ottawa can present some Emergencies Act inquiry evidence without public

While Ford claims he was responsive during the Ottawa occupation, his actions have been heavily scrutinized as a result of testimony from Ottawa city officials at the inquiry. Officials said Ford refused to participate in tri-lateral talks about the convoy and the prime minister claimed he was “hiding” from his responsibility.

Ford — who admitted he went snowmobiling in cottage country during the height of the occupation — has always maintained it was a policing matter and not a political issue.

“The reality is, if anyone was hiding, it was the premier of Ontario,” Fraser told reporters at the legislature. “And the residents of Ottawa suffered … because of that inaction.”

He said Ford received poor advice during the convoy and should apologize.

“Do you think if this was happening in Etobicoke, he would have waited two weeks? No. Someone told him, ‘Ignore it; stay out of it.’ It was a bad piece of advice to take, the premier should admit it and he should say sorry to the residents of Ottawa.”