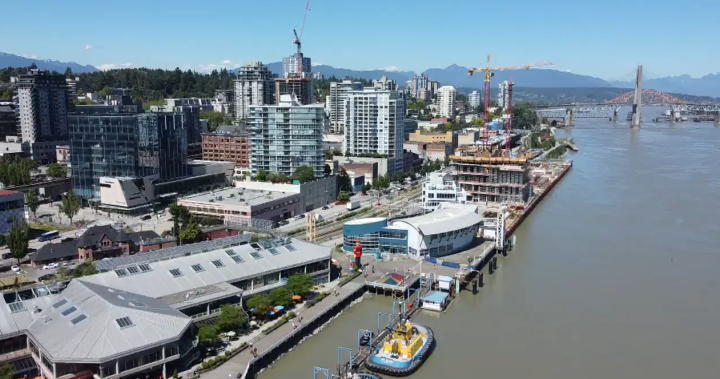 There are changes afoot in British Columbia’s original capital city, as it seeks to move away from its colonial past.

Founded in 1858 on the territory of the Qayqayt First Nation by the head of a detachment of Royal Engineers, New Westminster was given its name by Queen Victoria — the source of its royal nickname.

But outgoing Mayor Jonathan Coté, who proposed the change, said the 21st century city has outgrown its 19th century branding.

Would you re-name B.C.? First Nations artist wants new name for the province

“As the city in the past four years has really begun to engage in our work on reconciliation, that’s when we really started to see the incongruencies with our branding,” Coté said.

“It’s been something that’s been in the back of my mind for the last few years, so for me I think the time is right.”

It’s not the first time the city has discussed dropping the “royal” nickname. Coté said council debated the idea close to two decades ago, but that the community wasn’t ready at the time.

New Westminster has grown increasingly diverse since then, he said, and the time is right to develop an identity that is more reflective of its residents.

Sticking with the old moniker, he said, also sent the wrong message to First Nations.

“When me as the mayor sends a letter to an Indigenous nation or Indigenous partners and we’ve got a colonial crown on the letterhead, that is no longer OK,” Coté said.

“As a city that is wanting to have a good conversation about reconciliation, I think branding does matter.”

It is not the first time New Westminster has made changes in the interest of reconciliation. In 2019 the city removed a statue of John Begbie, B.C.’s first chief justice, from the plaza outside the New Westminster courthouse.

Begbie, known as the ‘hanging judge’ oversaw the conviction and death sentence handed to six Tsilhqot’in chiefs during the so-called Chilcotin war — an action Canada has since apologized for.

Not everyone is supportive dropping the Royal City moniker.

Coun. Chuck Puchmayer, who voted against the change, said the timing of the rebranding was not appropriate, and the quick decision left many residents out of the process.

“I thought that at the 11th hour of a four-year term of city council, it was an inappropriate motion at that time,” Puchmayer said.

“I believe something of this nature needs a really fulsome, intense consultation. You need all players in the community to have a voice.”

With municipal elections coming up in October and Coté not seeking reelection, Puchmayer said the moniker change also threatened to distract from other issues of greater weight during the coming campaign.

Should B.C. change its flag? Indigenous artist aims for debate with new design

“(It’s) a parting gift grenade that is going to be a contentious issue in the next election,” he said.

“We have shortages of staff in engineering, in bylaws, planning staff getting projects in the ground that will create revenue for the city, those are all very important pieces. I don’t want any more delays in that and we are already suffering in those capacities.”

In the short term, city staff will begin phasing out the crown and “Royal City” branding from official New Wesminster materials, something Coté said would be relatively inexpensive.

He said the more difficult — and costly — piece will be the process to choose a new branding for the city.

Coté said he expected that process to take several years in order to fully consult with the community.