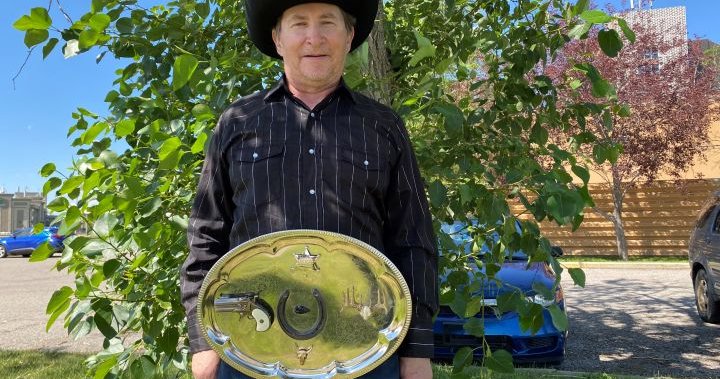 A Calgary man is taking the tradition of dressing in western wear during the Stampede to a whole new level this week.

“This tray belonged to my wife’s parents,” Sailer said. “They got it as a wedding present.”

‘It’s been crazy:’ People gearing up for this year’s Calgary Stampede

Sailer has customized the tray to serve as a buckle by attaching several western-themed items to its surface.

Sailer also fashioned two buckles from silver trays given to his parents on their 25th wedding anniversary, with one of the trays being particularly sizable.

“I had to put a leather strap on it because it’ll pull your pants right off – it’s 9-and-a-half pounds,” Sailer said. “I’ve worn it as a buckle, but you get a sore neck pretty fast.”

Yahoo: Calgary Stampede returns with parade, spectators and no limits

Sailer was showing his trays to guests outside the Clarion Hotel in northeast Calgary on Wednesday.

“It’s so ingenious to memorialize your family like that,” Bobby Okanee said who was visiting from Saskatchewan. “Make use of it, instead of collecting dust on the shelf.”

Sailer does landscaping work at the hotel, a place where he spent years as a waiter.

“I used to work in the restaurant wearing this (silver tray buckle),” Sailer said. “It’s not easy working an eight hour shift wearing this, trust me.”

And Alberto Dalla Riva, a traveler from Italy, was glad he got the chance to check out Sailer’s big buckles.

“I came all the way from Europe to feel the vibe of the Stampede,” Dalla Riva said. “And I was not expecting to find this — I’m very impressed.”

“I think it helps promote Stampede spirit,” he said.