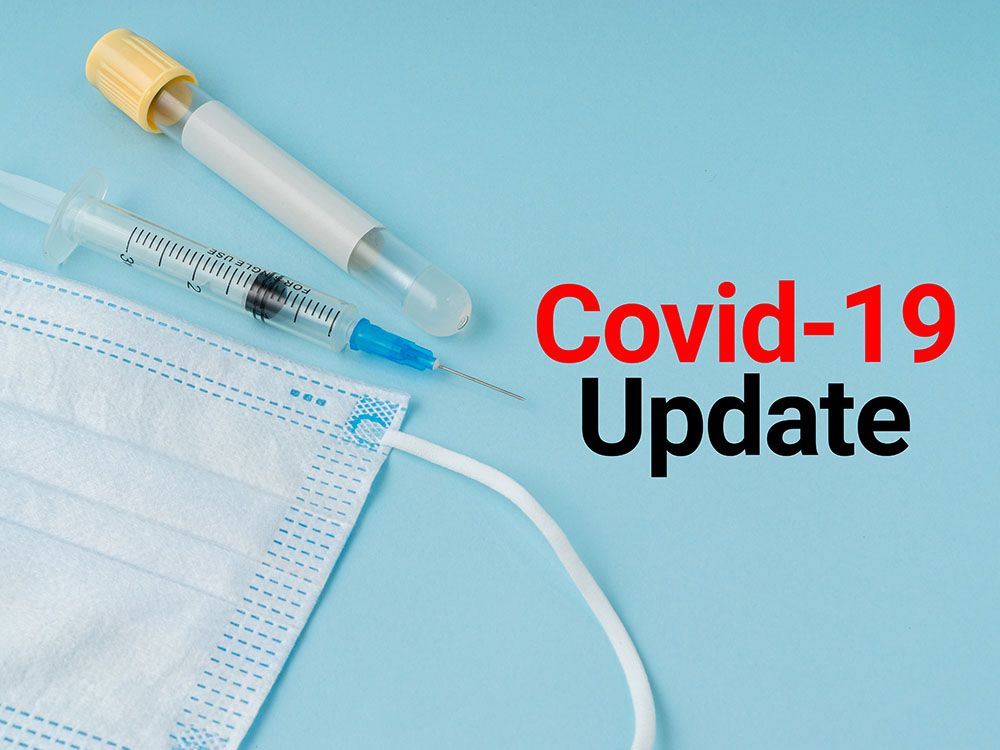 Here’s your update with everything you need to know about the COVID situation in B.C. and around the world for the week of Oct. 27-Nov. 2. This page will be updated with the latest COVID news and related research developments daily throughout the week, so be sure to check back often.

You can also get the latest COVID-19 news delivered to your inbox weeknights at 7 p.m. by subscribing to our newsletter here.

Here are the latest weekly B.C. figures given on Oct. 20:

The BC CDC will release its weekly look at the COVID-19 situation in B.C., with the latest hospitalization count, ICU numbers, deaths and new cases. The report is released around 1 p.m. every Thursday. Watch this space for updates.

One of British Columbia’s last remaining COVID-19 closures has finally been lifted.

Peace Arch Provincial Park, the nine-hectare park that straddles the B.C.-Washington state border near White Rock, reopened Monday after being closed more than two years ago amid pandemic-related border closures.

A statement posted by B.C. Parks says it has been working with the local First Nation, Canada Border Services Agency, RCMP and other agencies “to ensure the reopening of the park occurs in a safe and respectful manner.”

The Environment Ministry, which is responsible for B.C. Parks, had said reopening the Canadian side of Peace Arch Park was a priority, but that the park’s “open nature” was making it difficult to ensure visitors were honouring border regulations.

The park is unique in North America as the only one where people from Canada and the United States can meet without crossing a border.

U.S. officials kept the Washington side of the park open throughout the pandemic, and it became a hugely popular gathering spot for families and loved ones separated by the border closure, raising concerns in B.C. about large gatherings of unvaccinated people.

It has been called life support of the last resort, and during the pandemic ECMO, or extracorporeal membrane oxygenation, has helped pull some critically ill patients back from the brink of death.

But treatment with the advanced form of life support appears to come at a cost for some patients, according to a new study by Ottawa researchers.

The study, published in JAMA this week, found that survivors of ECMO had a 24 per cent higher rate of mental health diagnoses after discharge compared to other ICU survivors.

“We already knew that ICU survivors can suffer mental health impacts from the trauma of invasive treatments, living with new physical limitations and dealing with long recovery times,” said lead author Dr. Shannon Fernando, a critical care physician at Lakeridge Health and postdoctoral fellow at The Ottawa Hospital and the University of Ottawa.

A Canadian soldier who has publicly spoken out against the forced removal of hundreds of unvaccinated Armed Forces members is facing more charges.

Warrant Officer James Topp is now facing six counts of conduct to the prejudice of good order and discipline after the army reservist’s commanders laid four new charges against him last week.

The charge comes under the National Defence Act and is designed to enforce discipline in the ranks.

Two of the new charges are directly tied to Topp’s statements in two videos posted on social media in February, in which the Vancouver resident criticized vaccine requirements for military personnel and other federal employees.

No surge expected in global COVID cases this winter: Report

Global COVID-19 infections are projected to rise slowly to about 18.7 million average daily cases by February next year from the current 16.7 million daily driven by the northern hemisphere’s winter months, the University of Washington said in an analysis. The increase in infections is not expected to cause a surge in deaths, the University of Washington’s Institute for Health Metrics and Evaluation (IHME) said. It forecast that global daily deaths would average 2,748 people on Feb. 1 compared with around 1,660 now.

IHME estimates that daily infections in the United States will increase by a third to more than a million, driven by students returning to school and cold weather-related seasonal illness.

A surge in Germany has peaked already, it said in its report on Oct.24 , and expects cases to fall by more than a third to around 190,000 by February.

IHME’s report suggests that the current surge in COVID-19 infections in Germany might be due to Omicron subvariants BQ.1 or BQ.1.1, and will likely spread to other parts of Europe in the coming weeks.

The COVID-19 pandemic spared no state or region as it caused historic learning setbacks for America’s children, erasing decades of academic progress and widening racial disparities, according to results of a national test that provide the sharpest look yet at the scale of the crisis.

Across the country, math scores saw their largest decreases ever. Reading scores dropped to 1992 levels. Nearly four in 10 eighth graders failed to grasp basic math concepts. Not a single state saw a notable improvement in their average test scores, with some simply treading water at best.

Those are the findings from the National Assessment of Educational Progress — known as the “nation’s report card” — which tested hundreds of thousands of fourth and eighth graders across the country this year. It was the first time the test had been given since 2019, and it’s seen as the first nationally representative study of the pandemic’s impact on learning.

Copping, who retained his portfolio in Premier Danielle Smith’s cabinet that was announced Friday, defended his government’s intention of immediately and dramatically reforming Alberta Health Services despite the medical system’s current struggles.

And he said it can’t wait for a general election mandate for the new premier.

But for now, he said the trajectory of the deadly virus suggests defences now in place are sufficient to keep it under control and from overwhelming the health-care system.

Myocarditis risk is seven times greater with COVID-19 than vaccines

With approximately 80 per cent of Canadians vaccinated against COVID-19, according to Health Canada, that leaves 20 per cent unvaccinated and more vulnerable to the virus.

This makes news from Penn State College of Medicine even more critical.

Penn State scientists have discovered that the risk of myocarditis, or inflammation of the heart muscle, is seven times higher for people who’ve been infected by COVID-19 than from getting the vaccine. Shortness of breath, chest pains and rapid or irregular heartbeat (arrhythmias) are common symptoms of myocarditis. The condition can resolve on its own or with treatment, but it also can lead to lasting damage to your heart.

A former senior officer for the Ontario Provincial Police says the “Freedom Convoy” protests in Ottawa could have been ended without the federal Emergencies Act.

Former Chief Supt. Carson Pardy told the public inquiry examining the invocation of the act Friday that plans to clear the demonstrations were consistently delayed because of confusion and disorganization within the ranks of Ottawa police, and that the chief of police didn’t trust his OPP team.

Still, he said he believes the protests could have been ended without a declaration of emergency from the provincial or federal governments.

Ottawa Public Health is urging people who haven’t been wearing masks indoors and in crowds to put them on again, saying COVID-19 levels in the community are high and influenza is beginning to spread.

“If you haven’t been wearing a mask in an indoor and/or crowded setting lately, this is the time to start again,” OPH said in its weekly online COVID-19 snapshot.

Mask mandates were lifted last spring in Ontario, including in classrooms.

Among monitoring indicators showing that COVID-19 is spreading in the community are high levels of the virus in the city’s wastewater and test positivity rates that are “high and increasing”. Close to 20 per cent of PCR tests conducted in the city are now positive for COVID-19, a level usually seen during surges.

MASKS: Masks are not required in public indoor settings though individual businesses and event organizers can choose to require them.

Masks are also encouraged but not required on board public transit and B.C. Ferries, though they are still required in federally regulated travel spaces such as trains, airports and airplanes, and in health care settings.

GATHERINGS AND EVENTS: There are currently no restrictions on gatherings and events such as personal gatherings, weddings, funerals, worship services, exercise and fitness activities, and swimming pools.

CARE HOMES: There are no capacity restrictions on visitors to long-term care and seniors’ assisted living facilities, however, visitors must show proof of vaccination before visiting. Exemptions are available for children under the age of 12, those with a medical exemption, and visitors attending for compassionate visits related to end-of-life.

Visitors to seniors’ homes are also required to take a rapid antigen test before visiting the facility or be tested on arrival. Exemptions to testing are available for those attending for compassionate visits or end-of-life care.

How do I get vaccinated in B.C.?

Everyone who is living in B.C. and eligible for a vaccine can receive one by following these steps:

TESTING CENTRES: B.C.’s COVID-19 test collection centres are currently only testing those with symptoms who are hospitalized, pregnant, considered high risk or live/work with those who are high risk. You can find a testing centre using the B.C. Centre for Disease Control’s testing centre map.