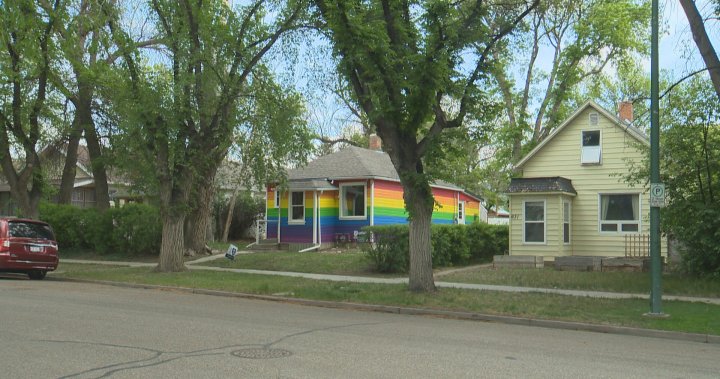 It immediately stands out as you drive down 6 Street South in Lethbridge.

Kim Siever’s home, which he shares with his spouse Mary and five of their six children, needed a touch-up, so they picked up a brush and several colours of paint and turned the property into a rainbow canvas.

“After I counted the number of rows that we have on the wood siding and saw that there were 21,” Siever said. “There are seven colours of the rainbow, so it kind of made sense to do a rainbow.”

The new look is garnering some attention on social media.

Siever’s tweet showing his home’s transformation has been liked more than 125,000 times as of Wednesday afternoon.

“They’re saying how much they like the colour of the house, how vibrant it is. How it really brightens up the community,” Siever said.

So, we painted our home. pic.twitter.com/vxXB95qIXW

While people’s reaction has been mostly positive, he noted he is also dealing with some opposition.

Some Twitter users say the multi-coloured look will bring down the property values of surrounding homes.

But one Lethbridge realtor doesn’t believe neighbouring homeowners should be concerned.

“For that particular property, there’s a possibility that should they decide to sell, they might consider repainting it to a more contemporary colour,” Courtney Atkinson, CEO of the Atkinson Team at eXp Realty, said.

“But, no, I don’t think it has the potential to affect any neighbouring property values whatsoever.”

Siever is using his home to celebrate Pride month, offering free Skittles to anyone who stops and takes a selfie with the building.

Siever added that while the facelift was ready in time for June, the colours are here to stay.

“(It’s) important to have that solidarity and support every day of the year,” he said, adding that he identifies as queer.

“Once you paint the house in a permanent colour, it doesn’t disappear come July 1. It’s something that’s going to be there all the time.”

Siever hopes his home is something that will bring a smile to anyone passing by.

“If they’re feeling down today, maybe it’ll be able to lift their spirits,” Siever said.

“A little bit of a bright ray of sunshine as they’re going about their day.”