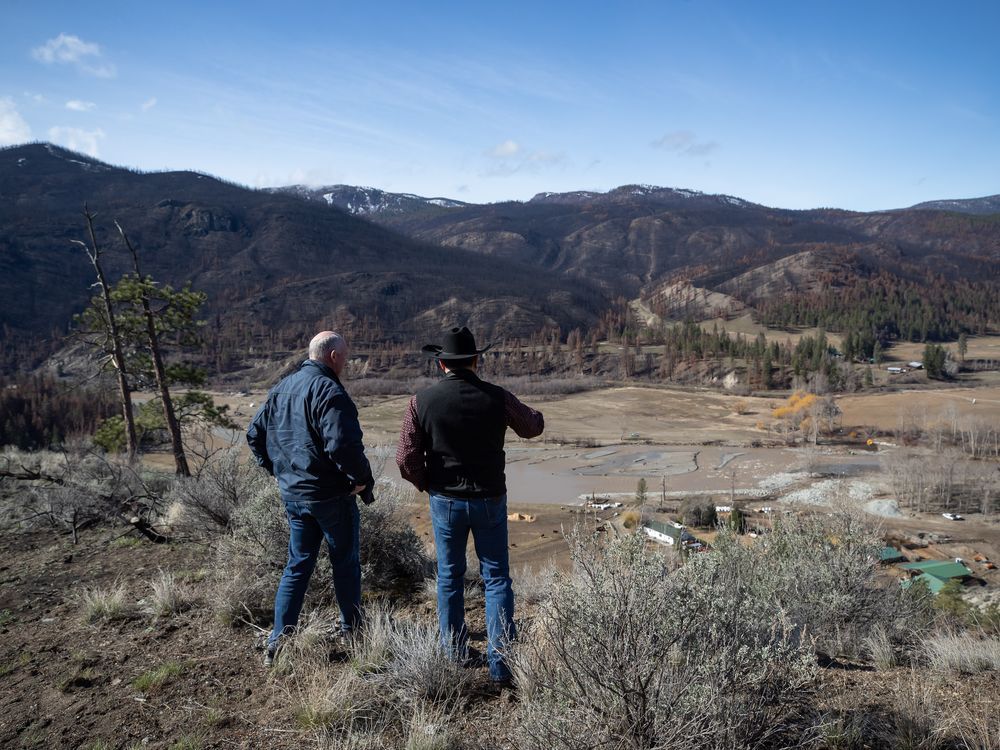 The idea of relocating his community isn’t one that Arnie Lampreau of the Shackan Indian Band in B.C.’s Nicola Valley thought he’d be considering when he was elected chief early last year.

After wildfires torched the forests surrounding the band’s reserves and flooding swept away homes and the only highway access just months later, however, he said he now wants to see members living in a safer place.

Lampreau was among the evacuees of both extreme weather events and said he knows it won’t be easy.

“Even myself, I look at starting over, you know. I took a better part of my lifetime to build where I’m at, and now, I’m basically going to be uprooted and leaving my home,” he said in an interview.

The Shackan First Nation isn’t alone in being confronted with a fight-or-flight decision in the face of climate change and increasingly extreme weather. Communities across Canada are weighing whether to invest in costly infrastructure upgrades to protect against the threats or spend on property buyouts and land acquisition.

A 2020 report on so-called planned retreat commissioned by Natural Resources Canada found the strategy is typically a reaction to a natural disaster like flooding where the cost of rebuilding homes is more than double the cost of relocation, health and emergency services.

However, it’s not a standardized practice, with neighbouring communities opting for different approaches, the report found. In the Ottawa-Gatineau region, homeowners in Quebec received buyouts following two record flood years in 2017 and 2019, while those in Ottawa did not.

“Inequity based on socioeconomic status and systemic marginalization is a persisting problem,” the report adds, pointing to the United States, where it says affluent, mostly white communities were able to garner more support for upgraded protections.

Recently, Indigenous Services Canada worked with First Nations to examine flood insurance and the unique context of reserves. The steering committee’s report, released last month, found 66 per cent of survey respondents felt that relocation should be considered in areas of repeat flooding.

“Yet, several participants expressed frustration at the need to have this relocation discussion, noting that the location of their reserves and the associated flood risks had been imposed on the community,” the report says.

One comment noted residents had previously been displaced and lost culturally sacred sites to developments like dams, while another said the government that created the reserves should be responsible for protecting them.

Planned retreat was never seriously considered as an option in Abbotsford, after devastating flooding last year.

Record rainfall pushed the Nooksack River in Washington over its banks in November, spilling across the border into Abbotsford’s Sumas Prairie. The flooded area is a former lake that was drained about a century ago to create some of Canada’s most productive farmland.

Mayor Henry Braun said buying out the whole area and allowing the land to return to its natural form isn’t an option.

“That has never been on the table,” he said. “It’s 22,000 acres of the best, prime farmland that there is in the country, if not the world.”

Reflooding the lake would also mean putting underwater a freeway, gas lines, electrical systems and other major infrastructure, he added.

The proposed $2.8-billion flood mitigation plan, which will depend on funding from other levels of government, would instead focus on the construction of a new pump station, improvements to an older one and replacements of temporary fixes to a dike with permanent ones.

While there would be some property buyouts, it’s too early to say how many or exactly where, he said.

“A key focus for the city is to ensure that agricultural land is preserved and to minimize impacts on properties by restricting water flow in the event of a flood,” a public bulletin for the plan says.

In other communities, a flight strategy ended with hybrid results. In the 1950s, the federal government recommended the relocation of Aklavik in the Northwest Territories due to flooding and land erosion and chose the present site of Inuvik for the new community.

Hundreds moved but others refused. The hamlet of Aklavik has survived and maintains the town motto of “Never Say Die.”

The City of Grand Forks has pursued a joint strategy — buying out about 90 properties in a high-risk neighbourhood, while also investing in new flood protection for the downtown core.

Two days of torrential rainfall in 2018 ravaged the city, with the worst impacts felt in North Ruckle, a low-lying area with modest rents and affordable housing.

The future of the neighbourhood is green space — possibly a small pond or dog park — and other “non-people stuff,” Mayor Brian Taylor said.

As for residents forced to abandon their homes, outcomes have varied. There was initial turmoil after it looked like buyouts would be made at post-flood values, but Taylor said those figures eventually reached close to market rates.

Some former residents left the city, some stayed. Some were able to use the buyout cash to land on their feet, while others lost footing as property prices across the province climbed in the ensuing years. Others ended up in government-subsidized housing, Taylor said.

“Some of them had been (in North Ruckle) for 20, 30, 40 years,” Taylor said. “It was a mixture of success and failure for the people coping with what was happening there.”

Taylor estimated the city is about 70 per cent through the $53-million recovery project, including buyouts and flood protection for downtown.

Taylor wasn’t on council at the time of the plan’s approval, but said he believes it’s the right direction. After the disasters, the downtown’s future was threatened because businesses couldn’t get insurance. With most of the flood protection in place, insurance companies are extending coverage again and there has been an influx of companies, he said.

“I think in the long run, we’re going to see this as a cornerstone of the city coming back, making a transition back to being the kind of vibrant community that we’re used to,” he said.

Explaining how the calculations are made in determining what is protected and what is turned into green space is more complicated than money, he said. Had the city built dikes around North Ruckle, rising river water would have been redirected to the downtown core, he said. And had the city not prioritized the cleanup and protection of downtown, businesses likely would have folded and the downtown itself would have moved.

“That’s a really sticky point, when you’re trying to explain to people that there was an analysis,” Taylor said.

Back on Shackan territory, Lampreau said the community is only in the early stages of exploring possible new land but is working with federal and provincial governments to identify potential parcels.

He said he hopes the land will not only be safer but more appropriate for agriculture and other production to sustain the community. Like many First Nations, he said the reserves were drawn on some of the least usable land, even without considering the effects of extreme weather.

“Our people were placed on these little postage stamp-sized reserves, that was the land that was given to us by the government in the Doctrine of Discovery,” he said.

While moving may be disruptive, it also wouldn’t be unprecedented, he said.

“Traditionally, you know, we didn’t stay in one spot. We’re nomadic, we moved around.”