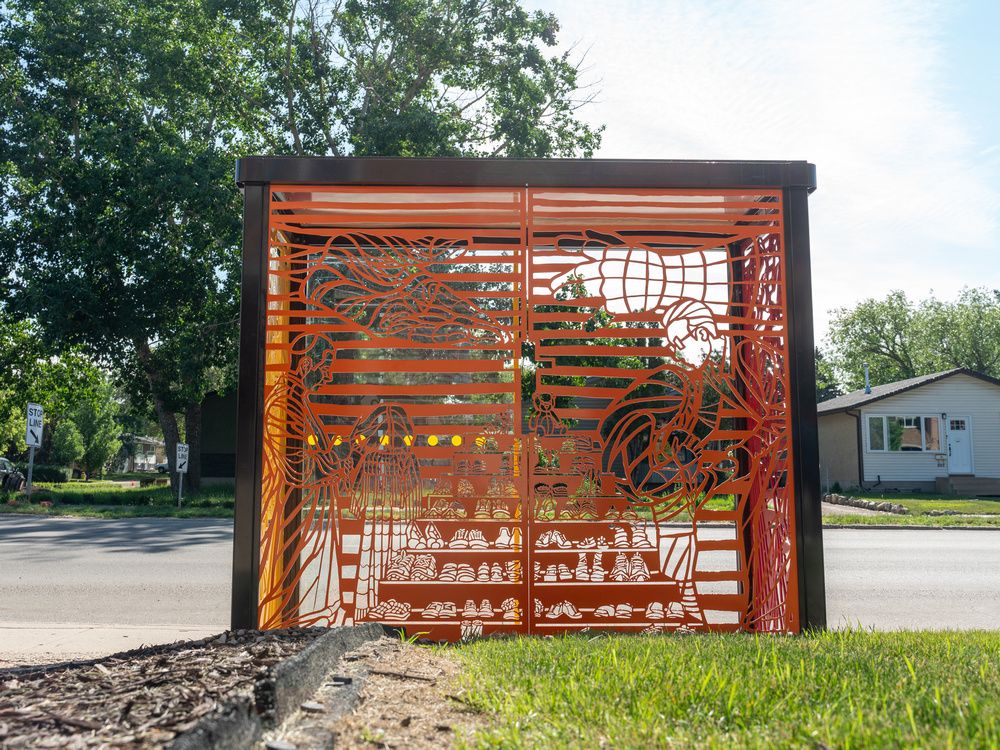 Pauline Okemow says she and others who went through Canada’s residential schools can often find it traumatic to recount their stories. Even so, she said, it was “amazing” to see a work of art made out of those shared stories come to life.

“It promotes healing for us,” she said of the Zoom sessions held with artist Justine “Tini” Stilborn in the lead-up to Wednesday’s unveiling of a metal sculpture adorning a Saskatoon Transit bus shelter on Confederation Drive.

Stilborn created the artwork with input from members of the Saskatoon Survivors Circle, a local group for residential school survivors. She said the experience caused her to reconnect with her own Indigenous roots, and reflect on the world she wants for her two young daughters.

“I hope that it inspires people to keep the conversation going, keep the stories being told,” she said.

Okemow said one of the themes the survivors group landed on early in the process was a sense of wanting to tell the story from beginning to end. Stilborn’s drawing does this in four panels, starting with a depiction of Indigenous children being taken from their homes, followed by depictions of having their hair cut off, and of a set of stairs covered in empty pairs of shoes — a symbol of all the children who didn’t make it home from the schools, where thousands of children died. The story ends on the fourth panel, which shows Indigenous kids returning to their culture.

“It did bring comfort to me knowing that we’re telling our story. We’re telling people ‘This is what happened to us.’ Even if they don’t believe it, it happened,” Okemow added.

Mayor Charlie Clark said he was especially pleased to see artwork promoting reconciliation make its way out of the downtown and the busier commercial districts, and onto a “day-to-day” street outside the city centre. He said it was also an example of people within city departments actively looking for ways to make reconciliation part of everyday operations.

Saskatoon Tribal Council Chief Mark Arcand said projects like the one unveiled Wednesday are “just the beginning,” and that he hoped to see similar initiatives to remember the legacy of residential schools spread right across the city.

“This history will never die,” he said.

The bus stop out front of 885 Confederation Drive is the fourth city bus shelter to feature Indigenous artwork. The others are located in front of Aden Bowman Collegiate, E.D. Feehan Catholic High School and near the intersection of 12th Street and Broadway Avenue.