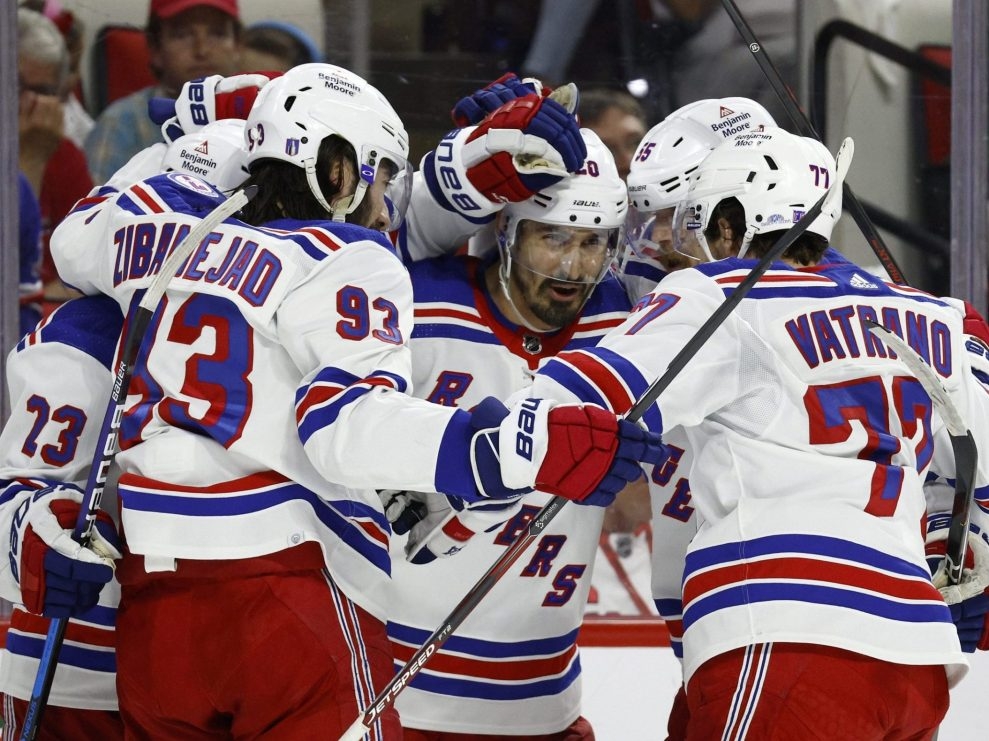 Chris Kreider scored two goals and the New York Rangers advanced to the Eastern Conference Finals with a 6-2 win against the Carolina Hurricanes in Game 7 of their Stanley Cup Playoffs second-round series on Monday night in Raleigh, N.C.

Adam Fox had a goal and an assist, Ryan Strome, Filip Chytil and Andrew Copp also scored, and Igor Shesterkin made 37 saves for the Rangers, who were down 2-0 and 3-2 in the series before rallying to reach the conference finals for the first time since 2015.

The Rangers, who are 5-0 in elimination games this postseason, will host the two-time defending Stanley Cup champion Tampa Bay Lightning in Game 1 on Wednesday.

The Hurricanes came in 7-0 at home this postseason and had posted six straight Game 7 victories in their history, but weren’t able to solve Shesterkin, who held them to two goals or fewer in six of the seven games.

Vincent Trocheck and Max Domi scored, and Antti Raanta made 16 saves for Carolina before leaving with a lower-body injury late in the second period. Pyotr Kochetkov replaced him and made nine saves in his seventh NHL appearance.

Trocheck and Kreider each scored power-play goals in the first period and Shesterkin made 16 saves to help the Rangers to a 2-0 lead.

Fox scored with a wrist shot from the inside edge of the right circle with two seconds left on the first man-advantage for a 1-0 lead at 3:40.

Rangers defenceman Jacob Trouba followed with a big hit on Carolina rookie centre Seth Jarvis, knocking him out of the game with an upper-body injury.

The Hurricanes were called for too many men while Jarvis was crawling off the ice, and Kreider scored on the ensuing power play with a redirection off a shot from Mika Zibanejad, who had three assists.

“All that comes from guys on the perimeter moving the puck well, coming up with loose pucks,” said Kreider, who had 52 goals during the regular season. “You’ve got to respect Mika’s shot there. He’s scored quite a few from that spot, so the guy sells out a little bit trying to get the block and he just finds me backdoor.”

Raanta, who became Carolina’s primary goalie after Frederik Andersen sustained a lower-body injury late in the regular season, was helped off the ice after outstretching his right leg in a save attempt at 15:37 of the second period.

Kochetkov entered the game and Strome scored 42 seconds later to stretch the lead to 3-0.

“That’s got to be a boost,” Carolina left wing Jordan Martinook said of the injuries to his teammates. “You’ve got to play for (Jarvis and Raanta) a little bit.”