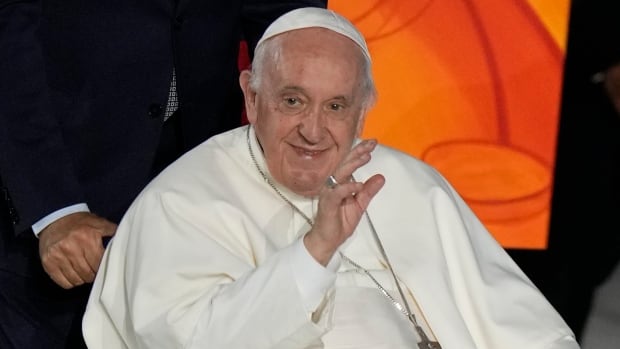 The chief of the Federation of Sovereign Indigenous Nations (FSIN), which represents Saskatchewan’s First Nations, says the ticketing arrangements for the Pope’s upcoming visit to Canada will result in residential school survivors who want to see him in person being denied that chance.

Pope Francis is scheduled to visit Canada from July 24 to 29 — making stops in Edmonton, Iqaluit and Quebec City — to advance reconciliation between the Roman Catholic Church and Indigenous peoples.

He is expected to apologize in person for the Catholic Church’s role in the residential school system.

The federal government said the visit is being organized by the Canadian Conference of Catholic Bishops (CCCB) in consultation with Indigenous partners.

But FSIN Chief Bobby Cameron said there has been very little inclusion and communication with Indigenous organizations on the disbursement of these tickets and the funding that should be coming to First Nations regions.

“Very little input,” he said. “We’re talking about being excluded from these very, very important decisions.

“The survivors expect it to be a better co-ordinated system.”

In an update published on Monday on the CCCB’s official website for the papal visit, it said a new batch of 10,000 free tickets for the July 26 mass at Edmonton’s Commonwealth Stadium was claimed in 10 minutes. A final block of tickets will be released this coming Monday, it said.

“As you see in the first phases of tickets that were available, they were scooped up in a few minutes,” Cameron said. “And now the next phase of tickets, I’m sure that is going to be the same thing.

“So there are going to be survivors who are left.”

When asked by CBC News to explain what he knows about how the process for allocating tickets works, Cameron said he didn’t know.

“It was a decision obviously made by the federal government and the Catholic Church of Canada,” he said. “I have no clue. I really don’t.”

The official website for the papal visit said information regarding priority seating allocations for residential school survivors, Elders and knowledge keepers has been provided to national Indigenous organizations, Catholic dioceses traveling with survivors and other Indigenous partners.

Lists of delegates have already been completed or are being prepared, it said.

Cameron said some who want to go can’t because of a lack of transportation and financial resources.

“This is what we were trying to avoid,” he said. “We didn’t want any survivor that wanted to go to not go.

CCCB spokesperson Laryssa Waler said the Canadian bishops were saddened to see the FSIN statement regarding consultation on the papal visit.

“We have not been presented with these concerns directly and will readily make ourselves available to speak with FSIN Chief Bobby Cameron about any steps that can be taken to ensure Saskatchewan First Nations meaningfully participate in this upcoming milestone,” she said.

Dioceses throughout Canada are assisting survivors and facilitating their attendance at events with Pope Francis, she said.

Waler said the planning for the upcoming papal visit has been “informed by constructive discussions” with leadership and staff at the Assembly of First Nations, Métis National Council, and Inuit Tapiriit Kanatami, in addition to local leaders and delegates who participated in the trip to the Vatican in March and April.

She also said the first allotment of a few thousand tickets for the mass at Commonwealth Stadium was sent to various Indigenous partners in Saskatchewan.

“We notified our partners weeks ago about the process we’ll be undertaking,” she said. “As they tell us they need more, we will allow more. We do this to ensure that people from across the country can attend.”

Waler said the mass at Commonwealth Stadium is the only papal event in Alberta that the general public can go to, while the others are for survivors and other members of Indigenous groups.

“The reason why we did that is we needed a way for Catholics to also see the Pope, while also respecting the reason why the Pope is coming,” she said. “We didn’t want these other events intended for Indigenous residential school survivors overwhelmed by the general public.”

On Wednesday, the federal government released new specifics on funding and supports for residential school survivors and Indigenous communities wanting to attend events related to the Pope’s visit.

The government said it was providing $30.2 million for First Nations, Inuit and Métis communities and organizations for community-led activities relating to the papal visit, such as healing activities, events, ceremonies and travel for survivors.

It said the Government of Canada is prepared to support additional requests as needed.

Support is available for anyone affected by the lingering effects of residential school and those who are triggered by the latest reports.

A national Indian Residential School Crisis Line has been set up to provide support for residential school survivors and others affected. People can access emotional and crisis referral services by calling the 24-hour national crisis line: 1-866-925-4419.