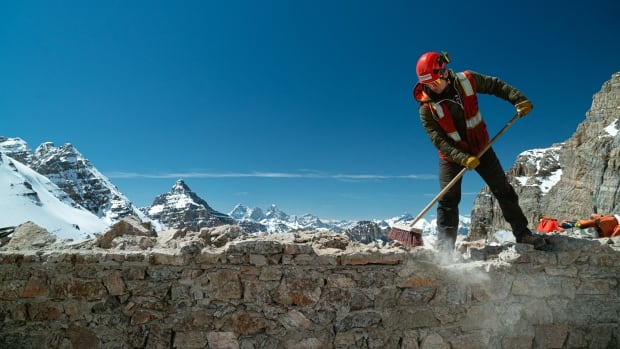 When a daring construction crew entered a century-old hut in the Rockies on the first day of its takedown, they lit the fireplace one last time and discussed for an hour the gravity of what they were about to do.

“The whole crew knew the grandness and the sadness of what we were doing,” said Sean Alexander, the manager of the construction crew that last month took apart the Abbot Pass Refuge Cabin.

“This was not just a regular takedown of a barn,” Alexander said during a news conference on Wednesday. “This was history.”

Parks Canada says only a piece of wall, some stone steps and a plaque about the Abbot Pass Refuge Cabin remain at the site that straddles the Continental Divide and the Alberta-British Columbia boundary.

The hut was designated a national historic site in 1992. At an elevation of 2,925 metres, the Abbot Pass Cabin was the second-highest permanently habitable structure in Canada. It was named after Philip Stanley Abbot, who was an American lawyer and the first recorded person to die while mountaineering in North America.

Parks Canada says it had to be dismantled because of erosion. Removal work was completed on June 30, according to Parks Canada’s superintendent of the Yoho Kootenay Lake Louise field unit, François Masse, who spoke at Wednesday’s news conference.

“The workers did salvage everything they could that could have heritage value,” Masse said.

Parks Canada is preserving those salvaged stones, according to Masse, including key pieces of rock used to build the cornerstones.

Parks Canada says staff noticed in 2016 that the slope the hut sat on was unstable and, two years later, some construction was done to stabilize the rocks.

But due to harsh weather and the COVID-19 pandemic, additional work was delayed to 2021, and by then it was too late to preserve the structure. Masse said the hut was well-built and could have stayed in place for decades to come had it not been for climate change.

According to Masse, Parks Canada spent significant amounts of money trying to stabilize the hut. In 2019, the estimated costs for attempts to salvage the hut were about $1.13 million.

‘Nobody wanted to see it go’

Keith Haberl, director of marketing and communications at the Alpine Club of Canada, said it was hard news to hear when earlier this year, Parks Canada announced it would be dismantling the cabin. The Alpine Club managed the hut for more than 30 years before it closed to visitors in 2018.

“Nobody wanted to see it go.”

Seeing the hut go was not only an emotionally difficult process — the crew that dismantled the cabin faced a difficult feat.

Sean Alexander of Tangiers Mountain Construction said his crew felt very fatigued working up at that high altitude. However, he reminded his crew how difficult it would have been for the original builders to haul the stones up the mountain and construct the cabin.

“We fly up in a helicopter and they didn’t,” he said.

Alexander said his crew found excitement in discovering small treasures hidden in the walls and floors of the cabin.

“You would hear a scream from upstairs going, ‘Hey, I found something! Look at this! Look at this name on this wall.'”

“One of my favourites was what I think was an original walking stick that we found under the floor … and some very unique coins that were slit in purposely, I believe, in between pieces of wood that you wouldn’t have found unless you pulled that piece of wood on.”

In the coming months, Masse said, Parks Canada will engage with stakeholders, Indigenous groups and the public to identify possible options to recognize the historic importance of the hut.

Masse also said the dismantling of the hut is one of many examples of how climate change is affecting Canadian parks.

“This is something as an agency that we have to be extremely cognizant about. We have a lot of scientific staff that are keeping a close eye on the influence in the environments that we’re managing, and trying to understand where it’s going and how we can mitigate it.”