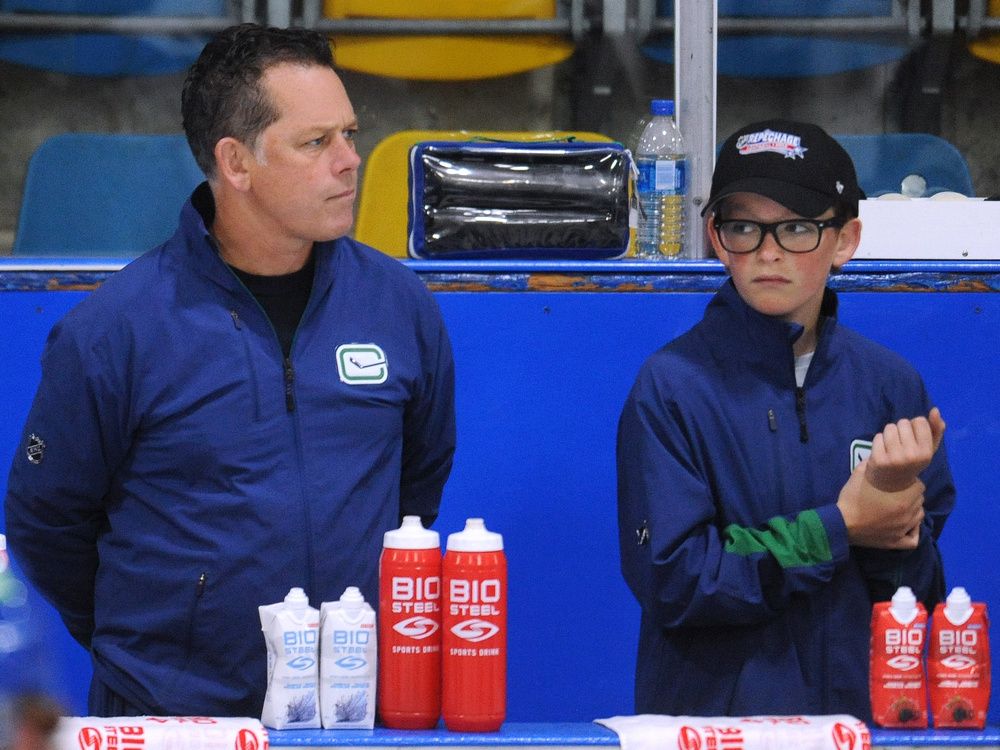 When you stand next to Vancouver Canucks goalie prospect Aku Koskenvuo, you immediately understand why he appeals to Canucks director of goaltending Ian Clark.

“Length” is a word the veteran coach has long used to described what he looks for in a goaltender — and that doesn’t just mean tall.

Koskenvuo is tall, but his arms dangle low. Even in your peripheral vision, you can see the size of his hands.

It adds up to an athlete who is different from most, Clark explained Wednesday at the Doug Mitchell Thunderbird Centre at the University of B.C.

Length, he explained, is more than being big in frame. You must be a top competitor, you must have elasticity in your movements, you have to be quick.

And it’s not just being able to stop the puck. It is also to take away space to shoot into, which he calls “coverage.”

“In game situations that are close proximity, when time is limited, to be able to stand in and gain a few extra inches of coverage is really powerful,” he said of athletes built like Koskenvuo.

Getting back to in-person coaching with his young prospects is a big deal for Clark. Most of his season is taken up working with the organization’s top goalies, but working with young goalies is a throwback to how he first started as a coach.

“You have the opportunity to really have an impact on these young players. And of course, that’s what ultimately we’re trying to do here, get them from point A to point B in their career, with point B being in the National Hockey League. And so anytime that we have an opportunity to get to our youngest assets is always exciting, and it’s always exciting to just see them in this environment against peers.”

Koskenvuo said learning online was nice — it was important to get the theory in his head — but in-person is another thing.

“I’m really starting to understand what he means, and I feel like every day I’m starting to notice stuff I can work on,” he said.

“Ian has thought so much about this goalie stuff. Some really great stuff,” he added with a laugh.

In preparing for development camp, and then moving to Harvard University next fall, Koskenvuo has been working with a fellow Finn, Marko Torenius. Torenius had been the goalie coach for SKA St. Petersburg for the past decade, but isn’t returning to the KHL next season.

His most notable past protege is the New York Rangers’ Igor Shesterkin.

“It was Ian who connected us. It’s great to see that Ian also has like contacts over there,” Koskenvuo explained.

“Of course, we’re doing Marko stuff, but I feel like Marko and Ian see things pretty much the same. There are some personal differences, but I’ve noticed that most of the drills have the same idea in them, and I think they envision a modern goaltender to be sort of the same.”

Summer development camp is, in many ways, hockey camp for professionals. Arturs Silovs is an example of how a player who is further into his professional career can still gain in such an environment.

Since Silovs attended his first development camp in 2019, he has actually spent time on a NHL roster, having played backup a couple times this past season when the Canucks’ top two goalies, Thatcher Demko and Jaroslav Halák, were forced from the lineup by COVID and injuries.

He got plenty of one-on-one time last season with Curtis Sanford in Abbotsford, but the progress never stops, he said.

“There’s always small things in games which can be better,” he said.

Clark acknowledged that the Latvian is still playing a bit of catchup because of how little he really played the last two seasons — in 2021-22 there were often three goalies at AHL Abbotsford, while in 2020-21, he played some in Riga to start the year but once the North American season started, because of COVID roster management concerns, he made just one appearance after Christmas.

“We wanted Arturs to get another chance to get into a captive environment,” he said.

Yes, the other four goalies in camp — Koskenvuo, Samuel Richard, Ty Young and Brett Brochu — have been asking him about his NHL stints.

“They ask about some things that I do, maybe it’s a couple of routines. lt’s always good to ask older guys what they do,” he said.

His career arc is well ahead of the four younger goalies in camp, but there are still plenty of things for him to work through that are in common with the youngsters.

For all the goalies, it’s a chance to get into the principles Clark has been sharing with them. There has been plenty of remote coaching the last two years, but there’s nothing like being on the ice with your coach.

And then they can walk away ready to work, with an innate understanding of the task in front of them. Repetition is key.

“I’m a big believer that a goalie has to be their own best goalie coach. And the only way you can drive your own game is if you have the knowledge and information, and understand what you’re trying to accomplish,” Clark said.

“They need to be the commander-in-chief of their own game.”