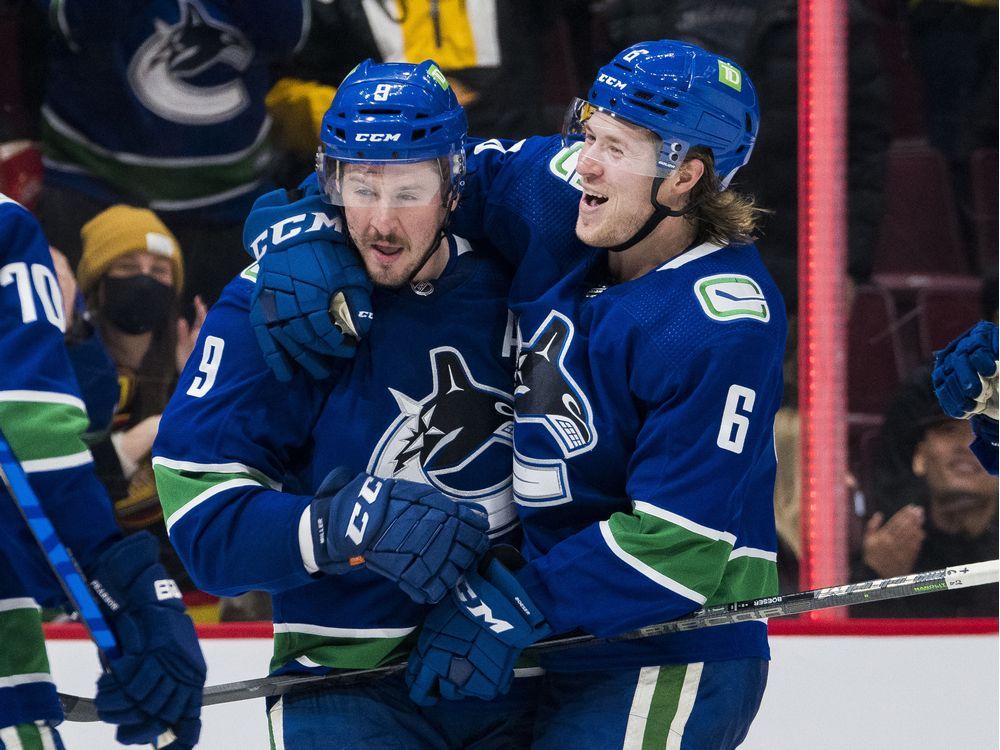 In the fashion world, grey can make a neutral statement when augmented by vibrant tones.

In the National Hockey League, the colour usually indicates non-contact practice status for a player coming off an injury or surgery, so the sighting doesn’t guarantee an imminent readiness for the regular season.

Brock Boeser has made significant progress from a Sept. 24 hand injury and subsequent procedure that reduced the Vancouver Canucks right winger to healing, staking and stickhandling but not shooting. That changed Sunday when he showed some snap in his patented shot and put coach Bruce Boudreau in a hopeful but cautious position in advance of the season opener Wednesday in Edmonton.

“His legs are fine, we’ve just got to get the rest of his body ready and hopefully he gets permission to play,” said Boudreau. “Coaches have some different hopes sometimes than doctors,

Are three practises and a game-day day skate enough to reunite Boeser with J.T. Miller and Tanner Pearson against the high-octane Oilers? Should there be a more prudent approach with the club embarking on a five-game road trip, or have circumstances dictated that it’s all hands on deck?

Right winger Conor Garland, who left Friday’s game against Arizona, was said to be having a maintenance day Sunday. Same for Quinn Hughes who also didn’t play against the Coyotes.

Right winger Ilya Mikheyev, who sustained a knee injury Sept. 25 against Calgary, skated on his own earlier Sunday and is expected to be in a grey jersey in Monday’s practice at UBC. Garland and Hughes will also practise.

“I’d be very surprised if he (Mikheyev) is not in a grey jersey tomorrow (Monday),” said Boudreau. “He’s skating and feeling fine, it’s a just a matter of getting him game ready.”

Boeser didn’t speak Sunday because he obviously didn’t want to build up his hopes and possibly have a setback. However, he hasn’t masked a desire to hit the 30-goal plateau for the first time in his career and become a more complete player to reward the Canucks’ faith with a show-us extension, a three-year, $US19.950 million commitment July 1.

He tied J.T. Miller for game-winning goals (6) was second in power play goals (11) and third in shots among forwards. However, his shooting percentage slipped to 11.8 per cent after 16.3 per cent in 2020-21. But 19 of his goals came with Boudreau at the encouragement helm.

“I wasn’t as good with the little details like that and showing up on a consistent basis,” Boeser admitted at end of the season. “There were times when I would get into games and not feel confident and I didn’t really make much of a difference.
“If can fix that, we could get some more wins and be in the playoffs.”

Feisty defenceman Riley Stillman was acquired from Chicago in a trade Friday for Jason Dickinson and was paired with Kyle Burroughs in practice Sunday. Last October, they fought at the United Center.

“He walked over and gave me a high-five,” Stillman, 24, said of now sharing a locker room and not exchanging punches. “It’s one of those things that happens. You’re competitive and there are no friends on the ice, but now we’re brothers and we’ll probably be going for lunch today.”

Stillman has fought 10 times at the NHL level and his scrap with Burroughs was ignited by the 6-foot-1, 196 pound Peterborough, Ont. native being a pest. He played as advertised and learned from his father, Cory, who played 1,025 games with Calgary, St. Louis, Tampa Bay, Carolina, Ottawa and Florida. He’s now an assistant coach with the Coyotes.

“I ran Holly (Nils Hoglander) twice on one (first period) shift and he (Burroughs) came over and asked me and I answered it,” recalled Stillman. “The element I bring started in junior and dad said if you’re going to hit people like that, you’ve got to answer the bell. And I’m not afraid to back down.

“He let’s me do my thing but says stuff in the summertime to make sure I’m in shape and he’s a big part of why I’m in NHL.  The trade was a bit of a shocker, but it’s part of the process and the culture in our life and I’m excited to be here.”

Stillman and Dakota Joshua give the Canucks a couple of willing combatants and it should help quiet the concerns that the club was too easy to play against last season. Stillman has just 18 points (3-15) in 108 NHL games — including 12 points (2-10) in 52 games with the Blackhawks — to go with 36 penalty minutes.

“I have a role to play hard and stir the pot a little bit and be hard to play against. I want to grow as a player, but not take away from my identity and catch a piece of someone,” added Stillman, a fourth-round pick of the Panthers in 2016.

Said Boudreau: “I’ve been told he competes hard and obviously has great bloodlines and is part of real hockey country in Peterborough. I’ve got to believe he’s going to come here and play his butt off.”