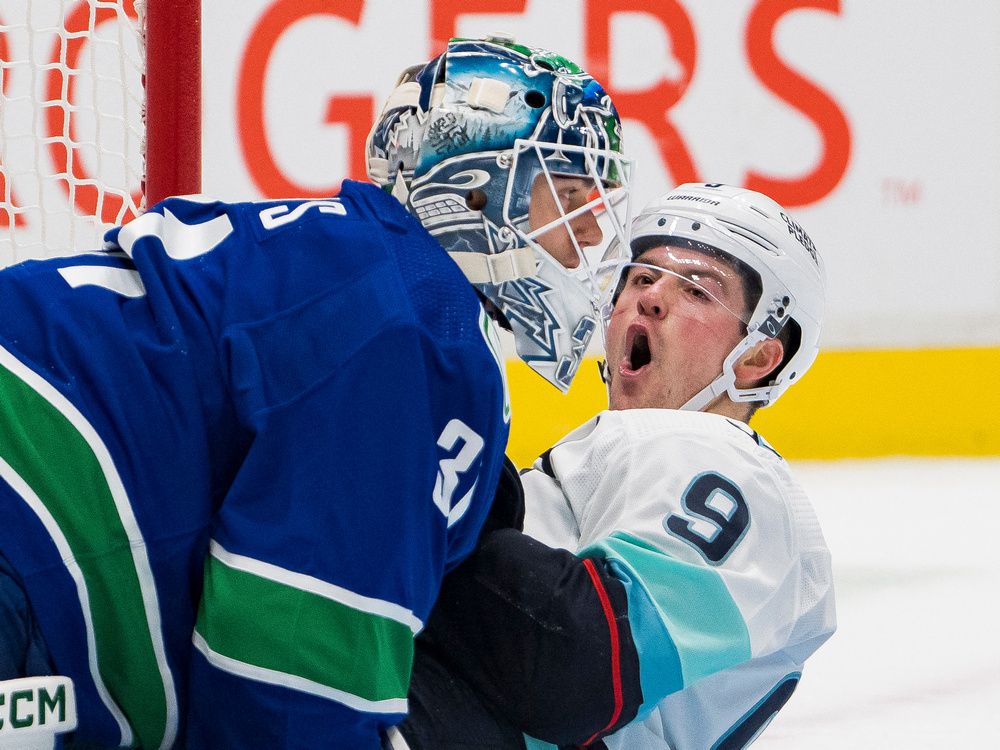 Three games into the 2022-23 National Hockey League pre-season and the Vancouver Canucks remain stuck on the launch pad, yet to win a game and unconvincing defensively.

Head coach Bruce Boudreau wants to see a lot more from his squad with four games left in the pre-season, starting Saturday in Seattle.

“I want to see complete games, whether you win or lose,” he said.

His team did plenty through 40 minutes. But defensively his team was poor, especially in the third period and overtime, leaving the veteran coach steaming hot post-game.

“That’s pretty disappointing,” he said of how the final 24 minutes went. “That’s what we talked about in between periods, is winning teams protect the lead.”

The defensive struggles are the question mark that hang over the remainder of the pre-season, with the start of the regular season looming.

Whether Thursday’s issues were about individual mistakes or overall systemic breakdowns, Boudreau wasn’t sure.

“I don’t know. I haven’t seen the replay and I mean, I gotta go look at the video and stuff like that,” he said.

Whatever they are, they need fixing because no matter how many goals they may score, if the Canucks can’t defend effectively, they will struggle to win enough to make the playoff run they believe they have in them.

Going back to the start of the pre-season on Sunday, when his Canucks lost a pair of split-squad games to the Calgary Flames, the coach said he simply needs to see more.

“My biggest thing is it’s two games at home against what I think were inferior lineups,” he said.

“We didn’t do what we’re supposed to do to get success.”

The Canucks did outshoot Seattle 36-29 on the night. That’s generally a good thing.

But the Canucks struggled to defend in their own zone and the quality of shots they gave up were too good.

While starter Thatcher Demko was in the crease for the first two periods those problems were patched over. Demko stopped 17 of 18 shots and left with a 3-1 lead.

But when backup Arturs Silovs came in for the third, the barrier in front of the Canucks’ goal became porous with the Kraken scoring three times on 11 shots.

The Canucks didn’t lose because of Silovs, but a big save on either of the two pucks he let in during the third period would have saved the game.

“I thought we played fast, I thought we played with energy in the first two periods. I thought there was a lot of good things that you could look at,” Boudreau said. “(Andrei) Kuzmenko gets two goals and an assist. I think that’s positive. I thought some of the young guys were playing pretty well, like the Amans and the Karlssons.

“But I just, I think, in our own end, we’ve got to get better at it. And that’s the thing. You can’t play just two good zones. You’ve got to play in all three zones if you want to be successful.

“I thought we were a little lazier in the third. The second goal that they got in the third period, he’s uncovered in front of the net. Our whole goal was to protect the middle of the ice and he was wide open.”

Defenceman Quinn Hughes, who is trying out the right side after playing almost exclusively on the left in the NHL, said his team did lots of things well, but like his coach, said they can’t afford to let games slip away in the third period.

“Not happy right now and shouldn’t be,” Hughes said of the team’s mood. “Got to find a way to close that out and look forward to this pre-season but definitely don’t want to let those games slip away in the regular season.”

One worry Boudreau doesn’t appear to have is his power play.

With Brock Boeser injured and Bo Horvat out of the lineup, Kuzmenko and Tanner Pearson got a chance to skate with the first power play unit, alongside Hughes, J.T. Miller and Elias Pettersson.

The unit clicked, going two-for-five as they moved the puck around with plenty of zip, keeping Seattle on their backfoot.

“I think that this year could be the best year with our power play. I’ve been playing with these guys for four years now and them with me. And Kuzmenko looked really good out there as well,” Hughes said.