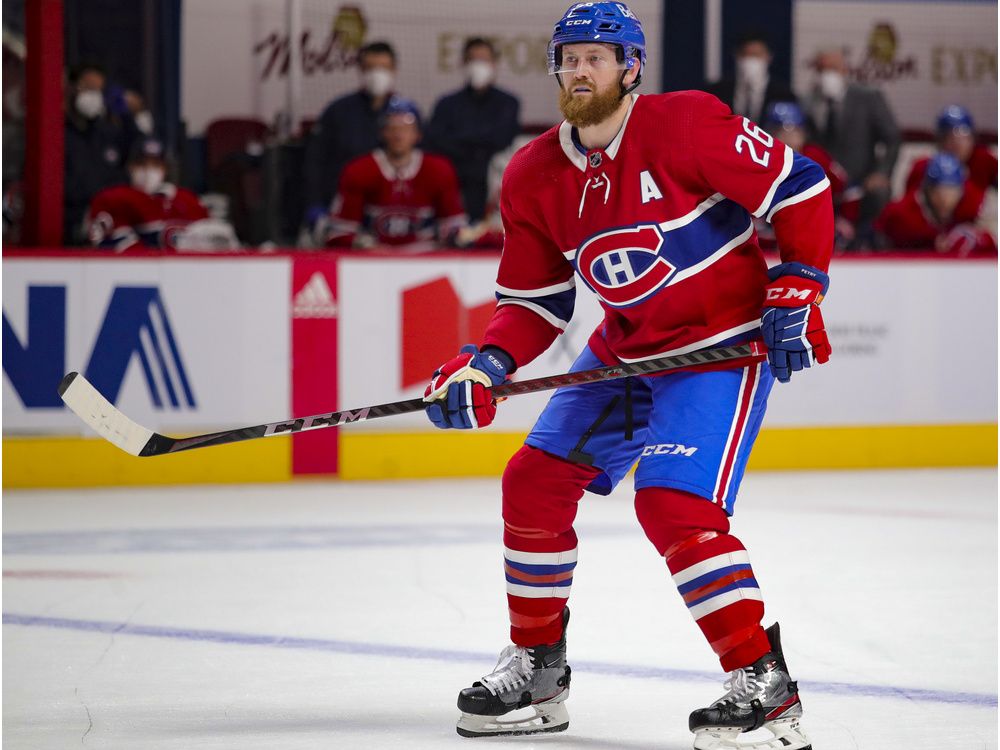 GM Kent Hughes has maintained he won’t trade defenceman Jeff Petry unless it’s a deal that benefits the Canadiens.

Petry asked the Canadiens to trade him last season after his wife decided to leave Montreal with their three young sons, unhappy with the COVID-19 restrictions in Quebec. She returned to the family home in Michigan while pregnant with a fourth boy. Julie Petry grew up in Houston and met her future husband when they were both attending Michigan State University.

Last week, leading up to the NHL Draft, Hughes didn’t rule out the possibility of Petry returning with the Canadiens next season.

“I’ve said from the get-go that we’ll try to accommodate him,” Hughes said. “But he’s an important defenceman and he eats a lot of minutes up, and for us to move him is going to put us in a certain situation. We have to feel comfortable that in trading Jeff Petry we’re advancing the interest of the Montreal Canadiens. If we can and we can accommodate him, we will. But if we’re not advancing our interest, we won’t do that.”

As of Wednesday afternoon, Hughes had not been able to make a Petry trade that would help the Canadiens moving forward and free up some salary-cap space. Petry has three more seasons left on his four-year contract, with an annual salary-cap hit of $6.25 million. According to CapFriendly.com, the Canadiens only have $223,334 in current salary-cap space.

As a result, the Canadiens cancelled a news conference with Hughes that was slated for 4 p.m. at the Bell Sports Complex in Brossard, since there wasn’t much for him to talk about on the first day of NHL free agency.

Hughes did sign Juraj Slafkovsky, the No. 1 overall pick at the NHL Draft, to a three-year, entry-level contract on Wednesday that will have an annual salary-cap hit of $950,000.

Bowey, 27, has 158 games of NHL experience, including two with the Vancouver Canucks last season. He has also played for the Washington Capitals, Detroit Red Wings and Chicago Blackhawks. In 58 games last season with the AHL’s Abbotsford Canucks, the 6-foot-2, 202-pounder had 8-20-28 totals and 80 penalty minutes.

Richard, a 25-year-old native of Trois-Rivières, has only played two NHL games with the Nashville Predators. In 71 AHL games last season split between the Milwaukee Admirals and Syracuse Crunch, the 5-foot-10, 186-pounder had 17-21-38 totals.

Defenceman Xavier Ouellet, who was captain of the Rocket, left the Canadiens organization and signed a two-year, two-way contract with the Pittsburgh Penguins.

Forward Laurent Dauphin, who split last season between the Rocket and Canadiens, signed a one-year, two-way contract with the Arizona Coyotes.

Defenceman Kale Clague, who played 25 games with the Canadiens last season after being claimed off waivers from the Los Angeles Kings, signed a one-year, two-way contract with the Buffalo Sabres.

Hughes is expected to speak with the media on Thursday, either on a video conference or in a news conference at the Bell Sports Complex in Brossard.