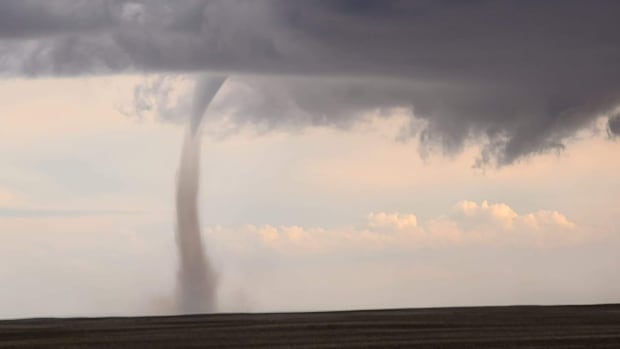 Rob Been was enjoying a nap after supper on his farm northwest of Moose Jaw, Sask. last month when a crack of thunder jolted him awake.

Looking out the window, he saw a landspout tornado passing by. The twister was ultimately given a rating of EF-0 — the lowest strength classification possible for a tornado — but Been found it strange that he didn’t receive any warning of the impending storm until long after it was gone.

“If it can pop up anywhere, you’d like to have some kind of notification rather than 45 minutes later,” said Been.

A recent analysis of tornadoes and tornado warnings in Canada from 2019 to 2021 by the Northern Tornadoes Project (NTP) out of Western University in London, Ont., shows Been’s experience isn’t out of the ordinary.

In what it calls a “report card” on tornado warning performance, the NTP scored Environment and Climate Change Canada (ECCC) — the federal agency responsible for issuing weather warnings — in three categories.

The first focused on what fraction of all tornadoes from 2019 to 2021 had a tornado warning. ECCC’s target is 50 per cent, but the NTP found only 26 per cent received warnings.

The final category scored how often a tornado watch preceded a tornado warning in cases of an actual tornado touchdown. ECCC’s target of a watch issued six hours prior to a touchdown 80 per cent of the time was relaxed to one hour by the NTP, but it still resulted in a success rate of just 12.1 per cent.

NTP executive director David Sills calls the data “quite surprising.” He said looking south of the border at the U.S.’s National Weather Service might improve warning stats in Canada, since the probability of detection for tornadoes there is quite high.

“For every radar across the U.S., there’s an entire forecast team,” said Sills. “Whereas there’s only a handful of (ECCC) offices across Canada.”

In addition to training and improvements to forecasting tools, Sills said the number of tornado warnings ECCC issues needs to be increased, even if a tornado doesn’t end up touching down.

“If you don’t issue tornado warnings on storms that you think may be tornadic, you’ll never get a forecast hit statistically,” he said.

Sills said that this was the NTP’s first tornado warning assessment, but it plans to do more in the future.

Improvements made, with more to come says ECCC

Joanne St-Coeur, director of the Meteorological Service of Canada — the weather forecasting arm of Environment and Climate Change Canada —  said ECCC has made strides in alerting the public to tornadic storms, such as creating its own weather app and working to upgrade all 33 of its radar sites.

She said the comparison to U.S. data is somewhat unfair, given Canada’s more sparse population and the fact that many tornadoes here are much weaker.

“We’re a country more prone to severe weather during the winter than we are in the summer months,” said St-Coeur.

St-Coeur said ECCC is looking at ways of detecting tornadoes in areas that don’t have radar coverage, and is planning to change the way tornado warnings are issued so that they cover smaller, more specific areas.