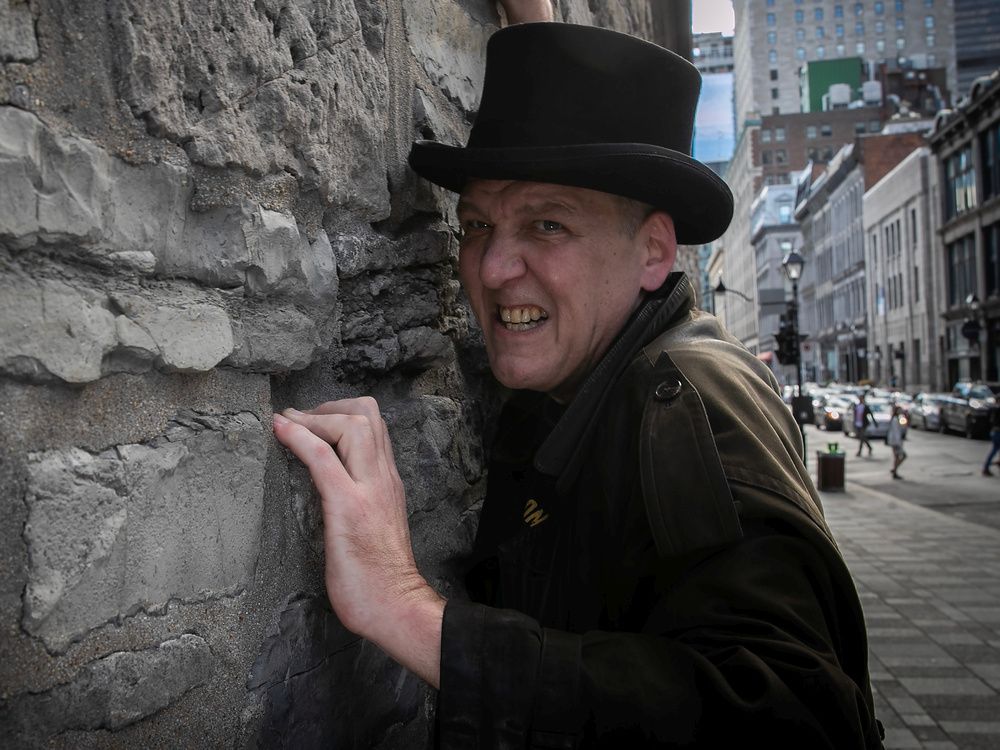 Evidently, Montreal was a ghost town long before the pandemic struck. Ghouls have been lurking in the shadows throughout the city for centuries, and they’re still mighty ticked by the treatment once accorded them.

But hands down — sometimes even severed — Old Montreal has been deemed the city’s most haunted neighbourhood by historian Donovan King, among the foremost authorities on spirits that go bump in the night, and occasionally in the daylight.

King, the founder of Haunted Montreal, has been organizing and leading walks during Halloween and other eerie periods through Griffintown, downtown, the Main and Mount Royal for years, but even he has been taken aback by the level of paranormal activity reported in Old Montreal.

In addition to tours of the aforementioned areas this weekend and on Halloween night, the curious and brave can check out King’s newly launched Haunted Old Montreal excursion for themselves with four Sunday night jaunts — two each in English and French — through the deceptively benign cobblestone streets.

“Old Montreal was the site of colonization and the site where a lot of atrocities, some dating back to the 1600s, took place,” King says. “A lot of this is obviously not mentioned in the history books, such as the fact that this is unceded Indigenous territory. And such as the fact that there were a lot of shocking executions conducted in what is now Place Jacques-Cartier. These were extremely dark and disturbing times, and the area is still rife with paranormal activities and ghost sightings as a result.”

The Haunted Old Montreal ghost tour takes in Place d’Armes, Cours Le Royer, the Courthouse District, Place Vauquelin, Champ de Mars, Place Jacques-Cartier and Château Ramezay. Along the way, trekkers will learn about the hanging of wrongly convicted Black slave Marie-Joseph Angélique during the New France era, the pesky Demon of the Hôtel-Dieu Hospital and the babbling decapitated head of Jean Saint-Père, among other events and figures.

“Consider that the religious organization responsible for founding Ville-Marie, the original name of the settlement later to be called Montreal, was the Société Notre-Dame de Montréal, otherwise known as the Société de Notre-Dame de Montréal pour la conversion des Sauvages de la Nouvelle-France, and you get an idea of what kind of horrors took place here,” King notes. “It’s remarkable that this history had been totally glossed over.

“Then the city was transformed from a zealous religious colony to part of the British Empire. In Old Montreal, during the Victorian era, there were a lot of statues erected that depicted gruesome events. Right in the heart of Place d’Armes, the epicentre of the tourist industry, there are reminders.

“But we’re starting to see changes. One Mohawk history teacher, Michael Rice, had complained to the Bank of Montreal that its Old Montreal headquarters had a plaque commemorating the killing of an Indigenous leader, which led to the bank removing offensive words from it. Then the bank allowed the Mohawks to put up their own plaque in Mohawk words to tell their side of the story.”

King claims Château Ramezay is not only among the oldest edifices in the city, but also the most haunted of all. Now a museum, it once served as a medical school and even as a base for the newly formed U.S. Continental Army during its 1775 invasion of Quebec. As a consequence, creepy activities still abound.

Not surprisingly, King’s business booms in October. In addition to the walks mentioned above, he has brought back the ever-popular Haunted Pub Crawl and the Paranormal Investigation at the Old St-Antoine Cholera Cemetery in the heart of the city.

“Over half our yearly business takes place in October,” says King, who is also an adult-ed teacher. “Even prior to the pandemic, winter had been dead for us. That’s when we came up with the pub crawl.”

Curious minds might wish to know if the spirits of the pub crawl could be attributed to those imbibed by over-served patrons.

“No, actually, we have three pubs — McKibbin’s, Hurley’s and Winnie’s — which are believed to be haunted and where we regale patrons with their stories, as well as ghostly tales like those of the headless Mary Gallagher, Montreal’s most infamous ghost, and fur baron Simon McTavish, who could be caught sliding down the snowy slopes of Mount Royal in his coffin.

“Regardless of the season or the pandemic, ghosts don’t sleep in this city. With over 500 documented ghost stories, Montreal is easily the most haunted city in Canada. And though New Orleans and Savannah claim to be among the most haunted in North America, I would contend we’re up there with them.”