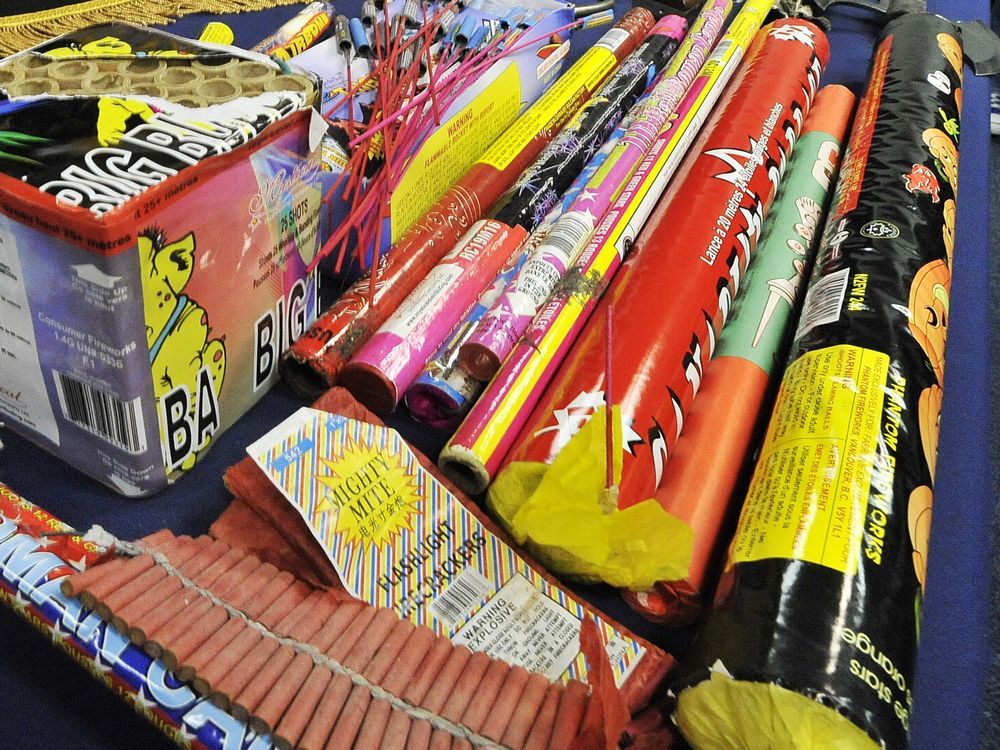 Vancouver historian and artist Michael Kluckner remembers saving up his pocket money as a child for three things: rides at the Pacific National Exhibition, Christmas presents and Halloween firecrackers.

Kluckner said he would visit Chinatown grocery stores with his brother to stock up on fireworks in October, in a tradition that is particular to British Columbia.

Start planning for your weekend with expert recommendations from our team of writers on what to cook, where to dine, and the perfect wine pairing delivered straight to your inbox on Thursday at noon.

The next issue of West Coast Table will soon be in your inbox.

“We kids would get dressed up a little bit and go door to door, trick or treat and get that done as quickly as we could and come back and then get out the firecrackers and start letting them off. We managed not to lose an eye or get blown up,” Kluckner laughed.

“There would be some real idiots who would throw the firecrackers right at each other, but mostly we would throw them out onto the street or in the garden and see how much dirt we could move.”

Fireworks have long been part of Halloween in B.C.’s Lower Mainland and historians suggest the tradition may involve a combination of English and Chinese heritage.

While they remain a noisy Halloween fixture in many communities, they are now often subject to regulation. The City of Vancouver, for example, bans their use by the public.

Kluckner, who grew up in the Vancouver neighbourhood of Kerrisdale in the 1950s, said it wasn’t until much later that he realized fireworks were not a universal Halloween tradition.

“I remember calling around, trying to find anybody who knew of another place where this happened and just couldn’t come up with anything,” said Kluckner, who is also an author of several books about Vancouver’s history.

Sabina Magliocco, a folklorist and professor of sociological anthropology at the University of British Columbia, said Halloween has been a time for mischief and vandalism across Canada.

But Magliocco traces the B.C. penchant for fireworks back to the Nov. 5 British celebration of Guy Fawkes Night, also known as fireworks night.

“Here in British Columbia, we had a lot of immigrants who came from England specifically,” said Magliocco.

Guy Fawkes Night marks the anniversary of the discovery of a plot to blow up the House of Parliament in London in 1605. Fawkes was caught under the parliament building with barrels of gunpowder, and later executed.

Now Guy Fawkes Night is mainly celebrated in the U.K. by lighting up bonfires and fireworks.

“This (tradition) came over to British Columbia with colonists from England. Now, remember that Halloween night is actually really not that far away from Nov. 5,” said Magliocco.

“In fact, in the past, from the end of October to the early days of November, that was ripe for doing different kinds of mischief.”

She said the British tradition got “mushed up” with North American Halloween culture, granting the West Coast a unique Halloween experience.

“So, it’s because of the immigration history here in B.C. that we have this maintenance of very English traditions,” said Magliocco.

Kluckner agreed with the theory that English settlers brought the fireworks tradition of Guy Fawkes Night here, but there’s also a crossover with Chinese cultures.

Chinese Canadian immigrants introduced fireworks to other British Columbians, thanks to their use at Lunar New Year parades and other celebrations, he said.

“For the availability of the firecrackers, I think the enterprising Chinese Canadian merchants just brought them in around that time and it took off from there,” he said.

“If you think of Vancouver 100 years ago, Chinese immigrants were mainly in Chinatown, but they are kind of scattered around. In big houses in the West End, they have Chinese cooks and servants.

“They would give servants a day or a couple of days off at Chinese New Year and they would go down to Chinatown and there would be all the fireworks, parades and firecrackers (that) got into the wider community.”

Over the decades, fire departments in the province have warned of the dangers of fireworks, including severe injuries or starting a blaze.

Numerous communities have banned their use completely, restricted them to Halloween night or allowed only technicians to purchase permits.

Here is a list of how some B.C. municipalities deal with fireworks:

The sale and use of fireworks by the general public is no longer permitted in Vancouver, the city said. While fireworks may continue at community events such as Diwali, they may only be discharged by a certified firework technician.

Halloween fireworks require a permit, which costs $5, and fireworks may only be set off on the evening of Oct. 31.

It is illegal to sell, buy or use firecrackers in Coquitlam. Setting off fireworks is also prohibited unless the user has a permit from the Coquitlam Fire Rescue Department.

The sale of fireworks is banned. They can be set off under certain conditions, including when a permit is obtained for an event.

It’s illegal to sell, purchase or process fireworks in the city unless you hold a permit from the Delta Fire Department. It takes at least 10 days to process the permit.

Fireworks are illegal in Richmond and people aren’t allowed to own, sell or light them without a permit, which requires two weeks’ processing time.

The city allows low-hazard fireworks to be set off on private property on Oct. 31 with the consent of the owner of the property. Setting off fireworks on public property may only be done as part of a special event, and requires a permit from the fire chief.

The sale and use of fireworks are prohibited in the city, except with a permit from its fire department. Permits are generally held by certified fireworks technicians who have received specialized training and the issuance of such a permit is rare.

Setting off fireworks on public property requires written permission from the city’s Director of Fire and Rescue Services.

Fireworks won’t be allowed this year because of drought conditions.

Possession and discharge of consumer fireworks and firecrackers is prohibited at all times.

Permits are required for the sale, possession or transportation of fireworks and applicants need proof of a valid fireworks supervisor’s certificate issued by Natural Resources Canada, a business license and a permit fee of $1,500 for sales.

Fireworks are illegal without a permit. Permits can only be obtained by licensed professionals. Residents can be fined up to $500 per occurrence for illegal use.

The city charges $23 for a one-time fireworks event and asks a series of questions, including what safety precautions the person will take during use, that they only be used on private property and that an extinguishing agent on hand.

This story was produced with the financial assistance of the Meta and Canadian Press News Fellowship.