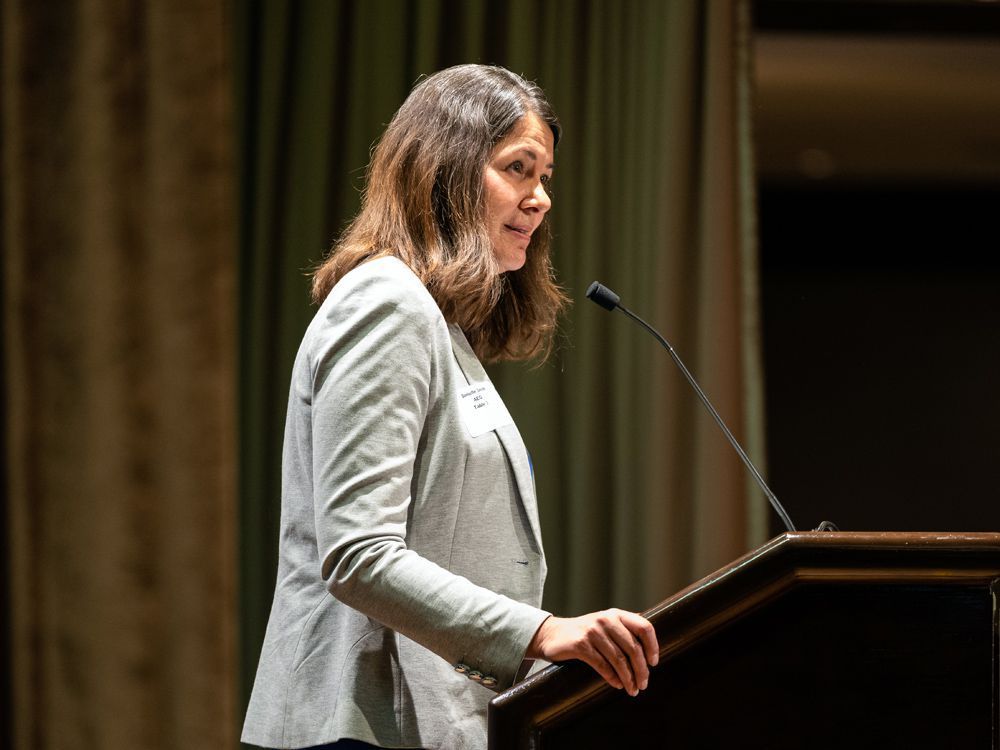 Pierre Poilievre is widely considered a cinch to win the federal Conservative Party leadership on Sept. 10.

Her campaign, equally aggressive, is aimed at a narrower, more reachable band of voters than Poilievre faces in the far-flung federal party.

Smith also appeals to many UCP members who are increasingly angry at Ottawa, while adding dramatic Alberta responses inspired by Quebec’s march to autonomy.

It’s working for her so far.

On Tuesday, Smith coughed up $175,000 and nearly 5,000 party member signatures to enter the UCP leadership race with a typically noisy splash.

The party demands three equal instalments of $50,000 from candidates, all to be paid before the vote. There’s also an extra $25,000 payment as a guarantee of good behaviour.

Smith paid the whole tab at once — an obvious sign to other candidates, and the party itself, that she has powerful fundraising appeal.

(One reason for the stiff payments, in fact, is for candidates to show the central party they can raise cash.)

Signatures of party members are crucial, too. A candidate must submit at least 1,000, including 200 from each of the five provincial zones — Edmonton, Calgary, north, central and south.

That’s a tough challenge for some candidates. They have agents fanning out at Stampede events, asking people to sign up. Some friendly folks even sign for more than one candidate.

Smith obviously cleared this bar with no trouble — even in Edmonton, the UCP wasteland.

I said a couple of weeks ago that her aggressive Alberta-first campaign gave her an early edge over all the other candidates for Premier Jason Kenney’s job.

But her laser focus on Alberta autonomy from Ottawa seems to put a cap on her general public support.

Nullifying federal laws appears just too radical. Some of her views, especially on vaccines, are far out of the mainstream.

ThinkHQ pollster Marc Henry believes Smith’s line will work in many rural areas, but not in the cities. Her views will provide powerful ammunition for NDP Leader Rachel Notley.

But nothing is fully predictable in these angry, emotional times.

As Poilievre has shown for months, alienation runs much deeper than is usually reflected in traditional analysis and commentary. More than enough Albertans may be ready to give Smith’s agenda a chance.

Travis Toews has already submitted his application. Others will, too, including Independent MLA Todd Loewen, who has considerable support after his open rebellion against Kenney.

Ex-Wildrose leader Brian Jean is running a campaign that focuses on bread-and-butter issues, including gasoline prices. He’s done more than anybody to expose the appalling profit-grabbing by Alberta gas stations.

Jean also agrees with many of Smith’s national prescriptions, although not the plan to nullify federal laws.

But he hasn’t matched her impact so far. We can expect to hear a lot more from Jean before this goes much further.

Toews has skilled campaigners at work. His endorsements from 30 MLAs clear the path for events in ridings. But to this point, he’s little known and needs to ramp up his recognition.

Smith is certainly well-known, partly because she does something that recalls Naheed Nenshi’s successful campaign for mayor of Calgary in 2010.

Nenshi laid out detailed policy explanations to back specific promises. They were widely read and showed serious substance behind the campaign.

Smith outlines her views in great length in a series of emails to supporters. She covers Quebec’s precedents, Alberta’s history with Ottawa, her own libertarian views on vaccine mandates and a great deal more.

One impression is that however much you disagree with her she isn’t hiding anything — including her mistakes, notably in trying to merge Wildrose with the PCs. Her agenda is right there to love or hate.

We don’t know how many party memberships Smith’s team has sold, but if the numbers match her fundraising she already has one foot in the premier’s office.