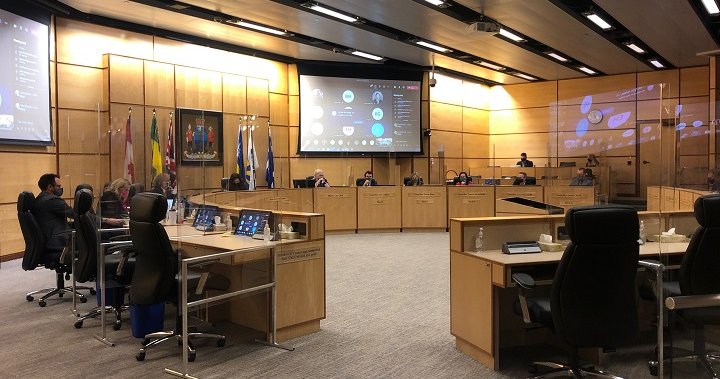 Regina City council voted Wednesday to move ahead with a study on a new high-level baseball facility, to boost taxi fares by 12.3 per cent, to allow the city to reduce density in new neighbourhoods, and to offer free transit to kids under 13.

Within that report was tucked a recommendation to create a committee that will be looking at new sports facilities, especially in the downtown area.

The feasibility study will focus on a new, multi-use, synthetic turf outdoor facility for high-performance baseball.

The committee referred to as the “catalyst committee” will look at a downtown sports facility arena, a new aquatics facility, and the baseball facility.

Council approved the funding of $15,000 for Regina Exhibition Association Ltd. (REAL) as part of the city’s share for the feasibility study.

Ward 2 Coun. Bob Hawkins and Tim Reid, REAL president and chief executive, will co-chair the catalyst committee, which will be responsible for the siting, staging, and financing of the potential facilities.

Not everyone spoke in favour of the initiative.

“Rather than being known as the best place to swim, play baseball or watch hockey and football, I would rather us be known as the first capital city in Canada to be considered as not having anyone homeless in our city,” delegate Jim Elliott said.

“Putting only some of those funds being proposed for many, if not all, the facilities being considered would get us to those goals sooner and help more people substantially today, and not just tomorrow,” Elliott said.

“I think it’s a committee which will help emphasize the synergies between all of these projects so that the group of projects, as they proceed over the next maybe 15 years, work together to strengthen the economy of our city, the recreational prospects of our city, and the culture of our city,” Mayor Sandra Masters said.

Coun. Shanon Zachidniak asked Coun. Bob Hawkins how the membership of the committee will be determined. He replied that a document will be brought to council setting out the terms of reference and names when the report comes back to council in August.

The city manager confirmed the document will be back in executive committee on Aug. 10 and subsequently, a proposed list of people for the catalyst committee.

Drivers say the increased fares are needed to help them sustain their businesses as operational costs are rising rapidly, especially at the pump.

“By the taxi bylaw, we are entitled to 12.3 per cent,” said Glen Sali of Capital Cabs.

Taxi fares are implemented by the taxi bylaw and are calculated using the “taxi cost fare model.” The model measures specific cost factors that affect the taxi industry based on the consumer price index.

Discussion with taxi brokers began in March of this year to determine if and how an increase to account for rising fuel costs was desired. The model was reviewed and it resulted in a proposed eight per cent increase in taxi fares, said Jim Nicol, interim city manager.

Brokers did not decide to move forward with the changes at the time. On June 10, all five taxi brokers wrote to city administration to ask for the increase. During the finalization of the report on Wednesday, the consumer price index was updated, resulting in a 12.3 per cent increase.

He said that it’s a slap in the face of all taxi brokers in the city who don’t have enough to keep up with the cost of living due to which the quality of drivers is going down.

As of Wednesday, only two taxi brokers had given their support to the additional increase.

Ward 8 Coun. Shanon Zachidniak voiced her concerns about the impact of rising fares on marginalized groups in the city. She asked if the city offers any kind of support or discount to community members who might be disproportionately impacted.

City Council approved an amendment to the density targets for Regina’s new neighbourhoods.

“This recommendation simply gives council and future councils flexibility moving forward,” said Stu Neibergall, president and CEO of the Regina and Area Homebuilders’ Association, in support of the motion.

The current density target requires 50 persons per hectare and the amendment would give the flexibility to lower density targets in new neighbourhoods.

City administration recommended an exception in the report approved by council that would allow a lower density requirement “{for certain areas based on unique circumstances.”

City administration wrote in the report that the overall intent of the policy would remain the same but the new amendment would allow council the ability to waive off density targets based on factors like the size of the area, accessibility, and potential to have neighbourhood services. Administration added that it won’t have too much of an impact because it is expected to be used rarely.

“Allowing this exception goes against the city’s Energy and Sustainability Framework as well as the goal of building complete neighbourhoods,” said Vanessa Mathews, a delegate and Regina resident. She says Regina needs to incentivize intensity in the city’s core and limit sprawl.

Ward 1 Coun. Cheryl Stadnichuk said that she was concerned that this policy would now be based on exception and moved to table it until after the intensification report comes to council. The tabling motion failed in a vote of 4-5.

The final motion passed 6-3, creating an exception to the density targets of 50 people per hectare.

Regina city council also approved a motion to make public transit free for kids under the age of 13.

It was only free for kids four and under until now; youth between five and 14 and attending high school got a discounted rate of $2.75.

“I think it’s important because we want to get more youth on the bus. It gives them an opportunity to try it and it promotes our transit,” acting deputy mayor and Ward 4 Coun. Lori Bresciani said.

She added that the move will cost the city around $2,000 per year.

City council also decided to continue talks at budget time about making transit free for all residents under 18 and seniors from 10 a.m. to 2 p.m.

1:51City of Regina wants public transit to provide a quarter of all trips taken by 2025

“There is a financial piece to that ask. It is about $1.9 million. You’ve got about a $1 million in revenue loss and about $900,000 in operating expenses,” said Kim Onrait, executive director of citizen services for the city.

He said that the move could help with ridership but will come with added cost.

“Yes, it does help ridership. The younger riders we can attract, that spills over into when they get jobs and are used to using transit. But council has a number of items that will come forward at budget time that need to be considered and this will be one of them,” he said.

The new rate for kids and youth under 13 will begin Aug. 28, just before the school year starts.