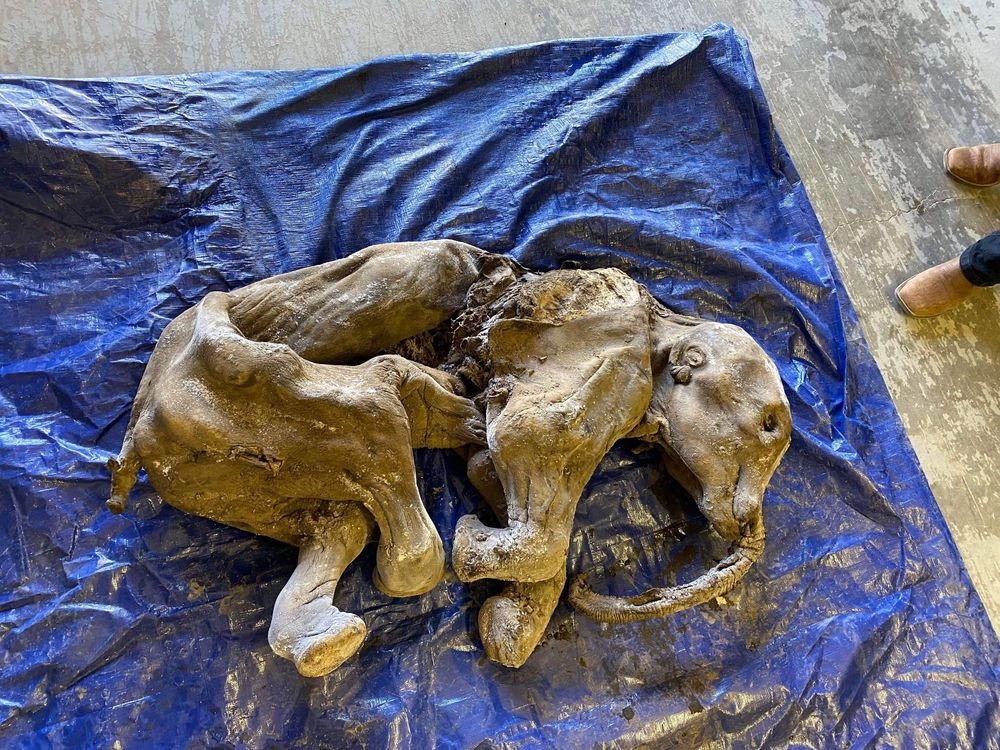 WHITEHORSE — Travis Delawski went out looking for gold but found something even more precious.

The miner for Treadstone Gold got in his excavator on June 21 just before lunch and set out for the river in Yukon’s Klondike fields where he began scratching the black earth.

“I put the ripper into the wall and popped it out and looked down,” he said during a briefing on Wednesday. “And there, something was looking at me.”

He hopped out of his machine for a closer look while calling his supervisor, Brian McCaughan, on the radio to report that he had “found a body,” he said.

At first, Delawski said he thought it was a buffalo.

“But then I got down and I looked kind of closer at it and it had a trunk. And then soon as that happened, I was like ‘Brian, it’s a baby woolly mammoth.”‘

The Yukon government said the animal was found in the Tr’ondek Hwech’in traditional territory and is the most complete and best-preserved mammoth found in North America.

Georgette McLeod, the Han language administrator for the nation, said elders had to find a way to note the animal’s significance, not just as a living being but also as a baby.

“We wanted to ensure that it had a name related to baby, but it also signifies that this is a very large animal that has walked these lands for a number of years.”

She was frozen in the permafrost about 30,000 years ago.

The animal is about 140 centimetres long and has well-preserved hair, trunk and tiny toenails that haven’t been hardened.

McCaughan, owner of Treadstone Gold, said when he went to look at the animal, he expected to see “broken-up bones,” which are usually found in the area.

“I walked over to look at the bones and it had fresh skin on it and hair and looked like it died a week ago,” he said with a laugh.

The significance of the discovery for him sinks in a little bit every day even nearly a month after she was found, he said.

“What a crazy unbelievable find,” he said, shaking his head.

There was a storm at the end of the day with bolts of lightning “dropping around us” and “rain poured sideways,” he recalled.

“It was an experience that just grows on you and every day you get emotional about it because you get connected.”

There is something in everyone’s life that stands out, and McCaughan said the day he saw Nun cho ga was his.

Jeff Bond, a manager at Yukon Geological Survey, said Nun cho ga likely died near a small stream coming off the side hill into Eureka Creek.

“It was subsequently buried likely by a mud flow that came down in a storm event,” he said. “Probably not unlike the storm event that we experienced on June 21 when we recovered it. That in itself is quite significant in my mind.”

The men put Nun cho ga in an excavator bucket after she was found and covered her with tarps and blankets to keep the body cold.

Woolly mammoths travelled across the Northern Hemisphere but disappeared about 10,000 years ago because of warming temperatures and excessive hunting.

Ross McPhee, senior curator at the department of mammalogy for the American Museum of Natural History, said the animal can offer insight into the rate of development of infant mammoths since the only information they have comes from elephants, their distant relatives.

Because the mammoths were living at a high latitude, life would have been much more dangerous than to be in the tropics, he said.

“So, what kinds of adaptations did woolly mammals have for their babies, so that they were able to mature perhaps more quickly than elephants do today.”

Until a plan can be drawn on next steps, Groves said Nun cho ga will remain in a freezer, many miles from where she was found.

“At this point, Nun cho ga has been frozen for over 30,000 years and is being stored in stable conditions,” he said. “And really, we’re in no rush to determine what the next steps are regarding research or conservation activities.”