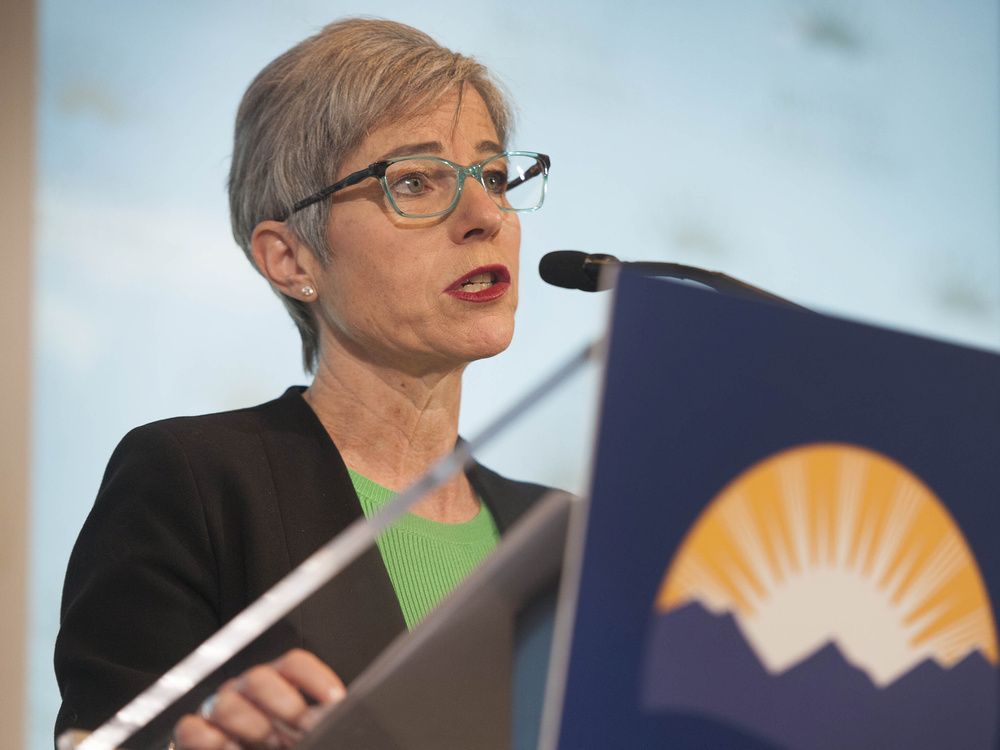 Finance Minister Selina Robinson has emerged as a potential challenger to Attorney General David Eby in the NDP leadership race.

Following announcements this week and last that high-profile NDP cabinet ministers had pulled out of the bid to succeed Premier John Horgan, political pundits had predicted a coronation for Eby, who has tackled tough files including overhauling ICBC and ordering the money laundering inquiry.

But Robinson’s statements Wednesday threw that in doubt.

“Given that the premier has stepped down, I have been asked if I would consider putting my name forward and I said I will consider it,” Robinson said during an unrelated press conference in Vancouver on Wednesday. “I’ve always believed that whenever an opportunity presents itself, particularly to women, we should take all these considerations very seriously. So I’m doing that right now.”

Robinson has been under pressure to deliver financial relief to British Columbians struggling with skyrocketing costs due to record inflation levels. Horgan said in April he tasked Robinson to come up with ideas but nothing has been announced.

Asked about the issue on Wednesday, Robinson did not have a clear timeline for any relief but cited the $110 ICBC gas rebates, most of which have yet to arrive in British Columbians’ mailboxes.

Horgan, 62, announced in late June that he won’t seek a third term as premier, citing his health struggles following his bout with throat cancer. He said he would stay on as premier until his replacement is selected in the fall.

Eby hasn’t officially declared his candidacy but told CBC this week he’ll decide after the NDP rules are announced.

Municipal Affairs Minister Nathan Cullen announced he’s not running, saying he wants to focus his attention on his young family, particularly his twin sons who are approaching their 12th birthday.

“I did want to kick the tires on it properly. I talked to a lot of people and took a lot of good advice,” Cullen said Wednesday during an unrelated press conference in Haida Gwaii. “But, in the end, I felt like it just wasn’t time for me or my family to take that next step up and to be able to do both jobs. Being a dad and a husband and a leader of a party fully, I didn’t see how I could do it.”

Cullen, who was elected to represent Stikine in the 2020 election, ran unsuccessfully in 2012 to be the federal NDP leader following the death of Jack Layton. Cullen was the member of Parliament for the Skeena-Bulkley Valley federal riding from 2004 until 2009.

Jobs Minister Ravi Kahlon, who would have been stiff competition for Eby after his work on the province’s economic recovery coming out of the pandemic, also cited his young son when he said last week he wouldn’t run. Kahlon threw his support behind the attorney general, giving Eby the heft of Kahlon’s political organizing experience.

Port Coquitlam Mayor Brad West’s name has been floated in some circles as an outsider with deep party roots and populist appeal. West, who was camping with his family when reached Wednesday, said in a message he’s “humbled by the number of supportive messages” but did not have an update on his candidacy.

Bowinn Ma, minister of state for infrastructure, has not said if she’s running but last week she released a Twitter thread calling for the new leader to be a “climate champion.”

“I want a leader who believes that addressing the climate emergency is a moral imperative; who will take an unambiguous stance against the expansion of fossil fuel extraction, including LNG, and end measures designed to incentivize the industry,” she wrote.

Ma’s tweet is a clear shot at Horgan’s support for liquefied natural gas expansion in B.C., which included tax breaks for LNG Canada which is building a $40-billion export terminal in Kitimat.