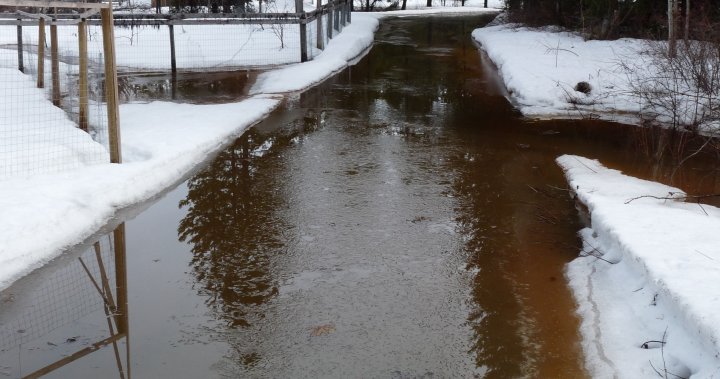 Lawyers for the British Columbia government have agreed to pay $300,000 to settle a lawsuit by a couple whose property flooded after a third of the forest in the surrounding watershed was cut down.

The agreement came in a handwritten note that was signed by the Crown’s lawyers and handed over in court on the day the trial was set to begin last month.

Ray Chipeniuk and Sonia Sawchuk launched the lawsuit in 2014, claiming that BC Timber Sales — the provincial Crown agency responsible for auctioning about 20 per cent of B.C.’s annual allowable cut — was negligent in its failure to take reasonable care to ensure their property in northwestern B.C. would not be damaged by the logging.

It also alleged the agency committed the civil tort of nuisance by clearcutting the watershed to an “unreasonable extent,” causing flooding and increased flows of water that would continue to affect the plaintiffs’ enjoyment of their property, south of Smithers.

The province’s 2015 response to the civil claim denies negligence and denies that the province owed the couple a duty of care. It says BC Timber Sales engaged in a planning process “typical for forest operations” in B.C., including assessing conditions at the watershed and engaging a hydrologist to provide advice.

The couple’s lawyer, Ian Lawson, said he had put forward an offer to settle for $300,000. He said he was in B.C. Supreme Courtin Smithers last month, waiting for the trial to begin, when Crown lawyers asked for a pause.

They then gave him the handwritten note agreeing to the $300,000 settlement, subject to final approval, “which counsel for the province undertakes to promptly pursue.”

Lawson described the last-minute decision as “rather dramatic.”

The Forests Ministry declined to comment, saying the matter has not been formally finalized.

The Canadian Press has seen a copy of the offer signed by Crown lawyers.

Chipeniuk, a retired professor of environmental planning at the University of Northern B.C., said in an interview that he and his wife spent years searching for an ideal rural property with land as close as possible to its natural state.

They purchased the 65-hectare property in 2004 and got to work expanding a network of forest trails and gardens to enjoy during their retirement.

Chipeniuk said the landscape is now so saturated he can’t use his tractor in parts of the property and lengthy stretches of trails are unusable for much of the year.

Chipeniuk said that for a year, he raised concerns with BC Timber Sales about the possibility that logging could affect downstream hydrology.

But the cut block was auctioned, and 30 per cent of the watershed was logged in 2009.

The first flood caused a landslide on the property, submerged the couple’s driveway and resulted in the contamination of their well water with E. coli, the lawsuit states.

The floods resulted in the combined loss of more than 160 trees, while reducing the property’s value by an estimated $236,000, according to the plaintiffs.

Chipeniuk said that in addition to the physical damage caused by the flooding, it had left him and his wife feeling what some psychologists call “ecological grief.”

1:54‘The public is being deceived’: Environmental group claims old-growth forest protections not working

Just about every day, he said, they felt a twinge of depression stemming from the changes the logging and flooding had wrought on the landscape.

Chipeniuk said that based on conversations with previous owners, the property had never had issues with oversaturation or flooding in the 30 years prior to the logging.

After filing their lawsuit, the couple hired Younes Alila, an expert in forest hydrology and professor in the department of forest resources management at the University of British Columbia, to provide evidence about what led to the flooding.

Alila described the evidence that logging was the culprit as a “slam dunk.”

5:06How logging and wildfires fuel floods and landslides

How logging and wildfires fuel floods and landslides – Jun 1, 2022

He prepared a 70-page report outlining his conclusion that the clearcutting had “supercharged” flows in the watershed, with snow and snowmelt the key factor.

The fairly flat, three-square-kilometre watershed lies in the “rain shadow” of B.C.’s coastal mountains, making it a drier environment. Just over half the average annual precipitation of 500 millimetres falls in the form of snow, Alila said.

“The flat topography in the snow environment is very responsive to floods,” he said, with snow in a lower-elevation area melting all at once, and more quickly, than it would on a mountain with lower temperatures at higher altitudes.

The logging changed the composition of the forest, removing half the coniferous trees, another factor influencing snowmelt, Alila said in an interview.

Conifers, which keep their greenery in winter, help collect snow before it reaches the ground and redirects some of that moisture back into the atmosphere through a process called sublimation.

The evergreen trees also provide shade, slowing down snowmelt on a sunny day, he said.

“When you remove the (coniferous) trees … it eliminates both the interception of the snow and the shading of the snowpack. It increases the amount of snow accumulating in the cut block, and it increases the energy available for its melting.”

Prior to logging, two-thirds of the watershed was covered by coniferous trees, Alila said, while the rest were deciduous trees that lose their leaves in the winter.

Now, about one-third of the watershed has been logged, one-third is covered by deciduous trees and one-third by the remaining conifers, he said.

Alila said the loss of half of the watershed’s conifers effectively doubled the impact of the logging rate to 60 per cent in terms of its effect on snow, snowmelt and hydrology.

“The melt used to be desynchronized between the deciduous and the coniferous trees,” he said, meaning it used to happen at different rates and times.

The synchronization of snowmelt induced by the logging amplified the magnitude, duration and frequency of water flows, especially in the springtime, he said.

It would take decades for the watershed’s hydrology to recover from logging, Alila said, noting his analysis of forest hydrology research in dry, snowy environments uniformly suggested there is little to no recovery in the first 20 years after logging.

Substantial recovery is expected only after 60 to 80 years have passed, he said.

The logging company that cut the trees, Triantha Enterprises Ltd., was also named as a defendant in Chipeniuk’s lawsuit. The company agreed to an earlier settlement, the details of which are subject to a confidentiality agreement, Lawson said.

A settlement isn’t as powerful as a judgment, which could inform cases in the future, Lawson said, but he hoped it would encourage other property owners who may have experienced similar circumstances to explore their options.