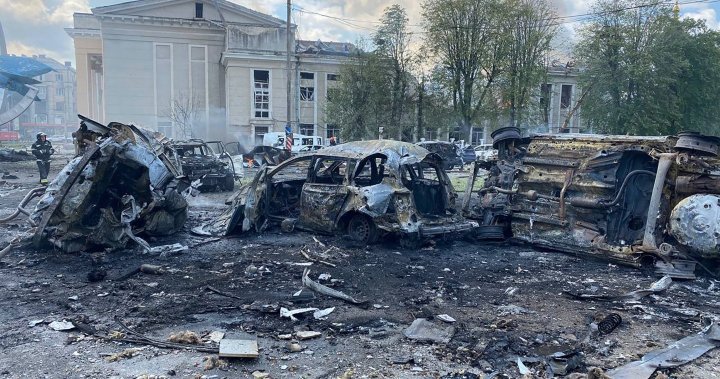 Russian missiles slammed into the heart of the central Ukrainian city of Vinnytsia on Thursday, killing 17 people including two children and wounding dozens, the Ukrainian Prosecutor General’s office said.

It said residential buildings, and administrative and office premises had suffered “significant damage and destruction” in an attack which the Ukrainian military said was carried out with Kalibr missiles fired from a submarine in the Black Sea.

About 90 people sought medical attention and around 50 of them were in a serious condition following the attack, which also destroyed a medical centre and involved three missiles, the police said.

Video footage showed thick black smoke billowing out of a tall building and sirens blaring as emergency workers rushed to the scene.

Photographs posted online by the State Emergency Service showed grey smoke rising later from the twisted remains of burnt-out cars and smoldering rubble. One showed an abandoned, overturned pram lying on the street.

“What is this, if not an open act of terrorism?” Ukrainian President Volodymyr Zelenskyy wrote on the Telegram messaging app.

The Russian defence ministry did not immediately comment on the reports from Vinnytsia. Russia, which invaded Ukraine on Feb. 24, has denied deliberately targeting civilians.

Vinnytsia lies about 200 km southwest of the Ukrainian capital Kyiv and is far from the main frontlines in eastern and southern Ukraine.

The missile strike hit the car park of the nine-story “Yuvelirniy” office block at around 10.50 a.m. local time, the State Emergency Service said.

“Unfortunately, there is probably no chance of finding anyone who survived (under the rubble),” a senior regional emergency service official told Ukrainian television.

“We will put Russian war criminals on trial for every drop of Ukrainian blood and tears,” he wrote.

Russia denies its forces have committed war crimes in Ukraine. The Kremlin says it is engaged in a “special military operation” to demilitarize Ukraine and root out what it regards as dangerous nationalists. Kyiv and its Western allies reject that as a false pretext for an unprovoked war of aggression.