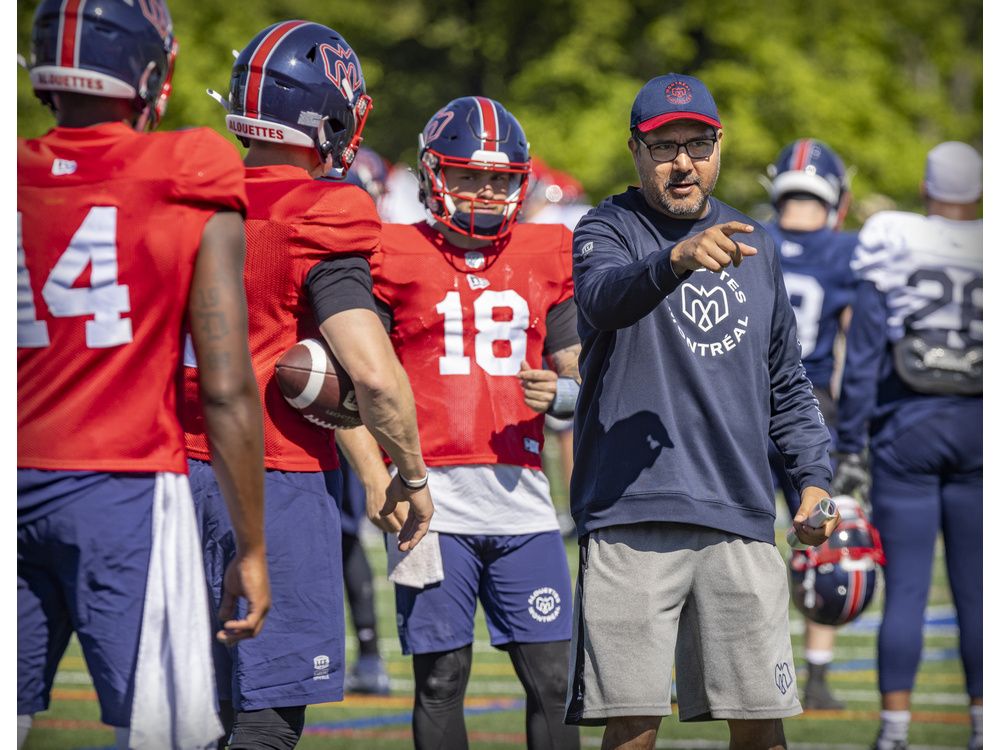 MONTREAL — Anthony Calvillo is committed to being a coach in the CFL.

He is so locked into that role that the former quarterback with the Montreal Alouettes and native of Los Angeles became a Canadian citizen on Nov. 19.

“It was exciting to finally get it and it was pushed back a year because of COVID,” Calvillo said in advance of Thursday’s CFL game between the Saskatchewan Roughriders and the Alouettes at Percival Molson Stadium.

Calvillo’s retirement as a player from football in 2014 contributed to him applying to become a Canadian citizen. He was allowed to remain in Canada during his playing days because his work permit listed him as a professional athlete.

That description was no longer valid upon his retirement. He then felt he had to start the process — which ultimately took three years to complete — to become a Canadian citizen.

The CFL’s all-time leader in passing yards had other reasons for pursuing a citizenship. Calvillo and his wife, Alexia, have two daughters (Olivia and Athena) who were born and raised in Montreal.

Calvillo broke into the CFL in 1994 with the Las Vegas Posse. He then spent three seasons with the Hamilton Tiger-Cats (1995-97) before joining the Alouettes in 1998.

He took some time off from football before joining the Alouettes in 2015 for his first stint as an assistant coach. He would serve as a receivers coach, offensive co-ordinator and quarterbacks coach through the 2017 season.

In 2018, he moved over to the Toronto Argonauts, reuniting with head coach Marc Trestman as the quarterbacks coach. It was with Trestman as Montreal’s head coach that Calvillo enjoyed some of his most productive seasons with the Alouettes.

“I enjoyed my time in Toronto and I learned a lot from Marc and the coaching staff,” said Calvillo, who turns 50 on Aug. 29. “For me it was more important that I was back in Montreal and under my own roof than being in Toronto.”

Calvillo went back to school in 2019 with the University of Montreal Carabins, whom he served as an assistant head coach (2019), offensive co-ordinator (2020) and quarterbacks coach (2021).

“It was three years of getting not only to coach young men as football players, but as young men that would go out into the world,” Calvillo said. “I was very proud of what we were able to accomplish in a short time. I was honoured and blessed to come back to the Alouettes. (Head coach) Khari Jones gave me a chance to share my knowledge and help this team going forward.”

Making the transition from coaching Canadian university athletes to professionals was an adjustment for Calvillo.

“I had to understand what level we’re at and what I can ask the quarterbacks about,” he said. “That helped me as a coach because I have to see the game through the quarterback’s eyes and see what they are capable of doing. It gave me an opportunity to take a step back, to be a lot more patient and be a better communicator.

“I really worked on explaining myself properly. If I didn’t, I would get the guys to give me their feedback on what I was saying and if it made sense.”

Calvillo was rehired as the Montreal’s quarterbacks coach on Jan. 6. He barely had time to settle into his job when the CFL revealed plans designed to increase offensive production after what was deemed a sub-par 2021 season.

One of the more dramatic changes was the tightening of the hash marks. The hash marks are now 28 yards from the nearest sideline as opposed to 24. They are nine yards apart compared to the previous 17.

“Now you can attack certain parts of the field and it doesn’t matter whether you’re on the left or the right hash mark,” Calvillo said. “We’re seeing the transition right now, but we’re always going to see the league trying to give the advantage to the offences. I give a lot of credit to the defensive co-ordinators and the defensive players because their jobs are very difficult and challenging.”

Calvillo has noticed a trend of younger quarterbacks taking over from more veteran players at the position. He is looking forward to being part of that growth.

“I want to be able to share my experience with them,” Calvillo said. “I want to push them to their limits and see them grow because as they grow, our league will continue to grow.

“I know that you need some solid quarterback play in this league in order to score points, entertain the fans, and have a chance to win.”