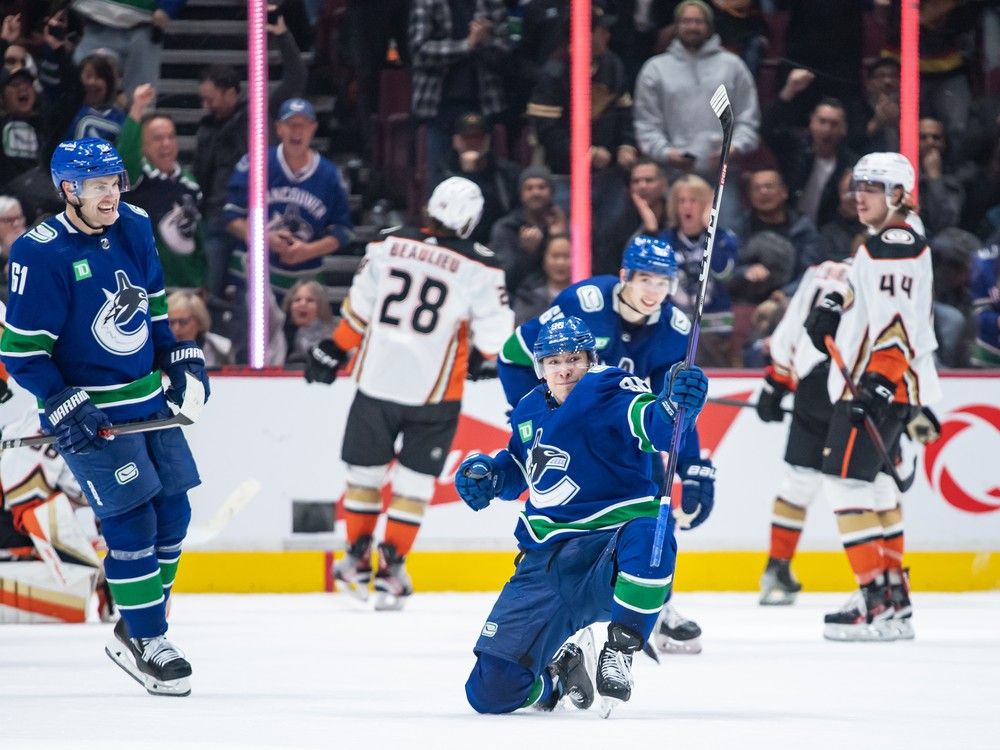 Andrei Kuzmenko had a 22.4 per cent shooting accuracy following his first 21 NHL games.

It spoke to precision when the Vancouver Canucks’ winger doesn’t try failed toe-drags around defenders and opts to unleash a heavy and accurate wrist shot.

It’s a learning rite of passage for the KHL product and an encouraging sign. J.T. Miller also sported the same shooting accuracy, the same amount of goals (11) and shots (49) after his first 22 games.

Kuzmenko, 26, has gone from a curiosity, to a hat trick, to a healthy scratch, to instinctively meshing with Elias Pettersson and Ilya Mikheyev on an electric line that has developed considerable chemistry to be a difference-maker on any given night.

Kuzmenko took 10 points (4-6) in his previous five games into Tuesday’s meeting with the Washington Capitals and considering his latest effort — a breakaway overtime winner in San Jose on Sunday — confidence and a quicker release are his new calling cards.

“It was OK because Millsy (Miller) give good pass to me and it was easy because he did all the work before me,” Kuzmenko said Tuesday morning of his winner against the Sharks. “It was very good.

If anything, Kuzmenko has an understanding of the bigger picture and what it means to match wits with countryman Alex Ovechkin.

“After no good start for team, now every game is important game, and now we start series games at home and very important,” he said. “Ovechkin is a legend in Russia and the NHL. A beautiful player I think and he is best player in world.”

Kuzmenko wanted to know the NHL record goal differential from Wayne Gretzky’s standard to Ovechkin’s pursuit — 894 to 791 — and gave up with a quick summation of the challenge:

“Ah, for Ovechkin, it’s easy,” he said of surpassing Gretzky.

As for a line that has combined for 22 points in the previous five games, Pettersson said it’s a product of Kuzmenko finding his game and linemates finding each other.

“We’re working for each other and helping each other,” said Pettersson, who had four goals and three assists over the five-game span. “We’re letting our skill work from our work ethic and he (Kuzmenko) has been great.

“We can all see his skill level and the way he handles the puck, protects it and makes plays. He’s fun to play with. I see him do those shots in practice and I knew we would win when he got that chance in OT (San Jose).”

Canucks coach Bruce Boudreau is buoyed by his winger slowly understanding the quickness of the NHL game and how a direct game can get shots through and not blocked.

“It’s the biggest thing he has to learn to continue to get better,” said Boudreau. “When there’s a guy in front of him, he wants to always make the deke and everything else.

“But when he’s shooting the puck and there’s nobody in front of him, his release is as good as anybody. And it’s fun to watch because it’s very accurate.”

A year ago, rookie Vasily Podkolzin was being lauded for a good start to his NHL career and a willingness to learn what would make him a penalty kill option. And his diligence had him deployed in the final minutes of games to help protect leads.

He would finish with 26 points (14-12) under Boudreau’s guidance, but the sophomore slump has hit him hard. The arrival of wingers Kuzmenko and Mikheyev would limit top-six looks and he managed but three assists in 16 games and was a healthy scratch six times.

Rathbone appeared in just six games with one assist and seven shots, and the defensive side of his game needs work.

“Young guys need to play,” reasoned Boudreau. “We love both of those guys, but when we’re playing fairly well, it’s no good for them to sit in the stands. We’d much prefer them to play. Pods is going to be an NHL player for a long time and he’ll be back. So will Jack.

“We want them to get their confidence back up and Pods was probably at a little bit of a low ebb. By going down there and playing in all situations will really help him.”