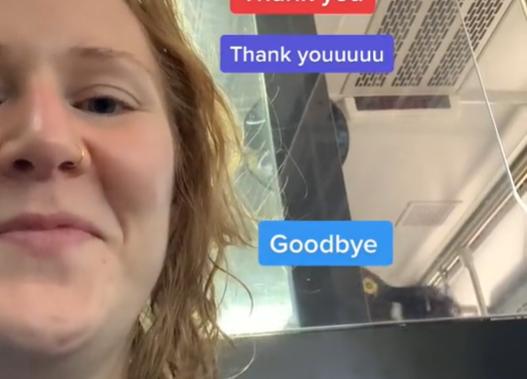 A video of Victoria commuters thanking their bus driver has gone viral on TikTok, garnering more than 7.4 million views and 32,000 comments in just two days.

Corinn Carlson, who runs the TikTok and Instagram accounts, “The Fat Passport,” filmed the passengers exiting the BC Transit bus while visiting friends in Victoria with her partner this week.

“I was just totally tickled by it, I just thought it was very sweet,” Carlson told Global News.

“It just kind of wakes people up from their daily routine, and that piece of connection I think is really nice when it’s unexpected.”

Bear seen in viral TikTok video approaching woman at B.C. bus stop has been put down

It was the TikToker’s second public transit video in the B.C. capital. The first, showing a BC Transit bus’s flashing “Sorry, not in service” display, gained more than 500,000 views.

“I thought it was very charming, very sweet — and to my American mindset — very Canadian as well to apologize not for being in service,” she said.

Carlson’s TikTok account has more than 164,000 followers and 6 million ‘likes.’ She said she usually posts videos of travel and food she eats around the world, so she was “very surprised” by the amount of engagement on her Victoria bus posts.

“I also like sharing little tidbits that I find interesting in different cities and different countries, like this video,” she explained. “Usually those videos are just something fun or charming or interesting that I want to share, and maybe a very niche audience from that area will appreciate them, so I did not expect this video to blow up the way that it did.”

In the comments on the video of passengers thanking the driver, Carlson said lots of people from around the world shared that thanking the bus driver was common practice in their communities. Others, including some Canadians, shared that it was not.

“What I liked most of all, which I wasn’t expecting, was the call and response between the passengers and the driver,” said Carlson. “You could hear in the driver saying, ‘Yep, buh-bye!’ to almost everyone getting off. It was very nice.”

Carlson said she recently lived in New York, and while some passengers would thank the driver if they exited from the front of the bus, few would call across the vehicle from the back.